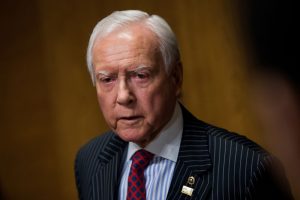 Have you heard the good news? The cost of extending the Children’s Health Care Program for another five years has shrunk from $8.3 billion to $800 million, according to a new projection by the Congressional Budget Office.

This is a result of Republicans repealing the individual mandate in their tax bill, the details of which Dylan Scott explains at Vox:

The mechanics are wonky, but this is the gist: Repealing the mandate increases ACA premiums; because ACA coverage is the alternative to CHIP for many kids, it would cost the federal government more if CHIP were to end and those children moved to the ACA markets. That makes extending CHIP cheaper, from the government’s point of view.

So Republicans should get right on funding children’s health insurance, which could run out in some states by January 19, no? As many have pointed out, $800 million is literally nothing when it comes to the federal budget, a mere drop in the giant military industrial complex’s steel bucket.

But, of course, $8 billion was also nothing—especially in comparison to the GOP’s $1.5 trillion tax bill. According to the children’s advocacy group First Focus, less than 8% of the federal budget is spent on programs for kids.

Pointing out the relative cheapness of a program like CHIP is useful in exposing GOP hypocrisy when it comes to handwringing about the deficit. But conservative resistance to reauthorizing children’s health care—or to any other vital social program—has never been about the expense—the program could cost nothing and some Republicans still wouldn’t do it. It’s about the GOP commitment to an ideological agenda that eviscerates programs for the poor while showering the rich with tax breaks. As long as policies fit into this goal, price is no object.

Originally published by Splinter News under a Creative Commons license from Gawker Media.