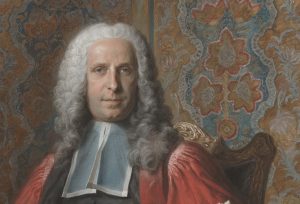 From a curatorial standpoint, pastels occupy an ambivalent position. Perched between line and color, between the intimate touch of the artist and the ambition of the exhibition piece, pastels really aren’t either/or but both/and. On one hand, many works in pastel—sumptuous eighteenth-century portraits, for example, or Degas’s richly elaborated scenes of dancers—were plainly conceived as paintings, meant to rival contemporary oils in their variety of color and touch, their high degree of finish, and even their scale. Many important pastellists also painted in oils, and in today’s market a highly finished pastel by an artist like Degas tends to command a price more commensurate with those of his oil paintings than those of his drawings.

On the other hand, pastels are considerably more fragile and more sensitive to light than oils. The crumbly medium, applied dry, with a stick, or wetted and worked with a brush, generally doesn’t adhere to its support as firmly as viscous oil paint. Most pastels, in essence, are colored dust on a page. They’re most often executed on paper (usually mounted on canvas), which can fade or darken over time. When not on view, they should ideally lead the life of drawings, stored motionless and flat, in the dark, under the care of a paper conservator (like the Getty Museum’s drawings doyenne Michelle Sullivan). That’s why eighteen Getty pastels “became” drawings last year, formally transferred to join nineteen pastels already in the drawings collection. But the story we’ll set out to tell in The Birth of Pastel is about how pastels first became paintings…

The earliest proper pastels—satiny, spreadable color manufactured in sticks for sale in sets of every conceivable hue—did not appear until the end of the seventeenth century. But draftsmen had been using dry colored media—both naturally occurring chalks, mined from the earth and cut into sticks, and fabricated chalks, made by mixing pigments with binders into a paste that could be rolled into batons—for centuries. Recipes for “pastelle” and “pastilles”—fabricated chalks—crop up in Renaissance artists’ treatises, recommending fish glue, fig juice, and gum arabic as binders.

The Getty collection includes several remarkable examples of colored chalk drawings from sixteenth-century Italy and France. Among these are a wonderfully free composition drawing by the Venetian painter Jacopo Bassano and an exquisitely finished court portrait attributed to an artist today known as L’Anonyme Lécurieux. Both date to around 1570, but their approaches could hardly be more different. Working on blue paper (known at the time as “turchina,” or Turkish paper, and commonly used by Venetian artists of the period to establish the middle tones of a drawing), Bassano laid in his design with swift strokes of black chalk and then used white, yellow, pink, and reddish-brown to explore the distribution of color across the scene. Here colored chalk served essentially as a preparatory tool. 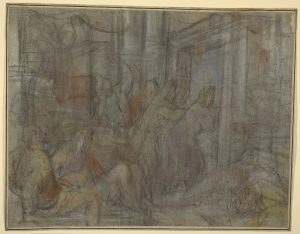 The anonymous French draftsman, by contrast, took a carefully controlled approach. Using just black and red chalk, he created the illusion of a far broader palette, suggesting touches of brown in his sitter’s mustache, a pink flush in his cheeks, and even a clear blue-gray color for his eyes. For all the obvious differences between these two drawings, each in its way predicts the subsequent development of increasingly complex colored drawings and, eventually, pastels. 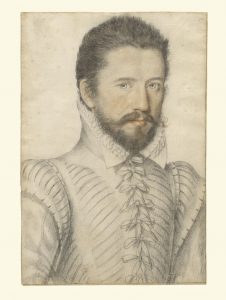 By the 1650s, we start to see a less graphic, more “painterly” approach—the beginnings of modern pastel technique—in the work of Robert Nanteuil, an artist active in Paris. His pastel portraits often served as the basis for prints, and yet, in works like the Getty’s Portrait of Monseigneur Louis Doni d’Attichy Nanteuil applied his modest array of colors much more like oil paints, with a new richness and variety of touch, effectively conjuring the specific textures and sheens of skin, hair, and cloth. 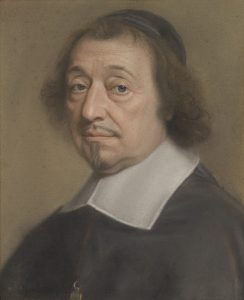 Unlike in the earlier portrait by L’Anonyme Lécurieux, the medium here completely covers its paper support; the reality of the sheet is swallowed up by the fiction of the likeness. This shift may reflect Nanteuil’s closely guarded recipe for pastel sticks—his creamier, more spreadable colors—but it also points to a change in his use of the medium, from an essentially linear application to a thicker, softer one, in which the artist used his fingertips to smudge marks made with the pastel stick, a practice known as “sweetening.”

No pastels have ever been “sweeter” (or sweeter) than those of Rosalba Carriera, the Venetian artist who mastered this medium in the early eighteenth century. Using blue paper—like her compatriot Bassano—and commercially manufactured pastels, newly available in a wide array of colors, Carriera developed sophisticated techniques to convey the bloom in a cheek, the luster on a string of pearls, the softness of a velvet cloak. For example, she might apply a layer of wetted pastel with a brush to establish a base skin tone and then revisit the area with dry, powdery pastel to suggest the downy surface of a young girl’s cheek. Carriera’s prodigious skill and speed, her knack for the flattering likeness made her the favorite portraitist for English aristocrats visiting Venice on the Grand Tour and garnered her invitations to the courts of Paris and Vienna. 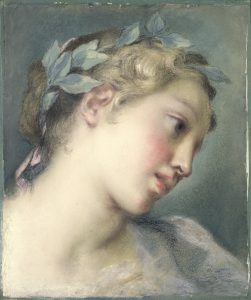 Carriera’s prodigious skill and speed and her knack for the flattering likeness made her the favorite portraitist for English aristocrats visiting Venice on the Grand Tour and garnered her invitations to the courts of Paris and Vienna. 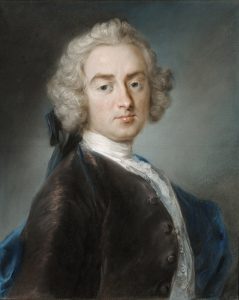 In Paris, Carriera’s work enjoyed an enormous success and exerted a powerful influence on French pastellists of the subsequent generation. Preeminent among them was Maurice-Quentin de La Tour, whose pastels exhibit an uncanny naturalism. La Tour developed a wildly successful portraiture practice (numbering among his sitters Louis XV, his wife, and his mistress) while eschewing oil paints altogether. The fact that he was named peintre du roi (painter to the king) in 1750 speaks to the pointed rivalry at this moment between pastels and oil paintings, summed up in a single, spectacular work today in the Getty collection.

At six and a half feet tall, La Tour’s portrait of Gabriel Bernard de Rieux, a Parisian magistrate and heir to a banking fortune, is the artist’s largest pastel and probably the largest pastel produced in the eighteenth century. Pieced together from over a dozen separate sheets of paper, and worked up with a dizzying array of techniques, this picture competes with contemporary oil portraits on every front: in richness and variety of color and texture, in fineness of detail and finish, above all, of course, in size.

If ever a pastel was a painting, this, surely, is it.

And yet, for all its monumental power, this work is more fragile than it might at first appear, susceptible to the same threats from vibration and light as other pastels. Gabriel Bernard de Rieux has spent the past two years in the dark, patiently awaiting his turn on the wall in the pastel gallery. I can’t wait to see him back on view this summer, marking the triumph of painting in pastels. 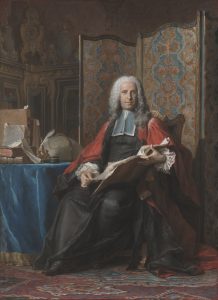