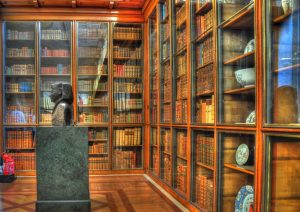 The British Museum’s Enlightenment Room is a display dedicated to the age of Enlightenment. Separated into the various arts and sciences, there are books, fossils and statues on display, along with examples of earthenware and metalwork, which try to explain how pieces were viewed and collected at the time. / Photo by Mendhak, Wikimedia Commons

None of us can deny the importance of studying history. It allows individuals to understand their past, which in turn enables them to have a clear comprehension of their present. By learning the causes as well as effects of the events of history, human beings would know about the possible ways by which they can deal with the struggles that often arise between nations or its inhabitants.

In the following discussion, I am going to talk about the informative 18th century, which has exceptionally influenced the contemporary world. Mentioned below is a detailed analysis of how the Enlightenment Age (18th century) brought remarkable changes in the varied fields.

The Enlightenment could be loosely defined as an ethical or philosophical movement that took place in the 18th century. It was characterized by a strong belief in the supremacy of human reasoning and innovations that have taken place in the religious, political and educational doctrine. This exceptional movement began in the 1500s and spread through France, England, Germany and other leading nations of Europe by 1700s. The dramatic changes that came during the Enlightenment Age not only allowed people to perceive society in a rational way but also freed them from superstition, ignorance, and tyranny, thus, trying to make the world a secured place by offering mental and physical liberty. The renowned thinkers of this era confirmed that an ideal social order could only be fabricated if the people made use of forbearance and common sense.

Effect of the Enlightenment

Historians have quite successfully pointed out that the key objective of Enlightenment was to provide the people an exceptional opportunity so that they can get freedom from the fears that have robbed their happiness. Religion was considered to be a chief factor that did not allow the 18th-century society to become progressive. Owing to excess fanaticism and superstitions, the individuals of the age were not able to downsize the events that occurred daily. The scientists with application-oriented minds were unreasonably punished and oppressed as they came up with logical theories or notions. For example, the well-known thinker Galileo challenged the religious order by discovering the functioning of the universe. He was persecuted by all the conventional establishments including the Church, which being an instrumental part put maximum efforts to combat resourceful humanists, scientists, and scholars.

However, gradually enlightenment was able to show its profound impact on the societies and gave rise to a novel religious view known as Deism. Many excellent inventions were made and diverse policies were formulated with an aim to separate the state from the traditional confines of the Church and allow it to relish independence. Due to this, individuals were able to break free from the unnecessary restrictions and achieve valuable virtues and utmost satisfaction.

Some monarchs, who embraced enlightenment in the 18thcentury, were Joseph II, a Roman Emperor of Austria, Frederick II of Prussia and Catherine the great of Russia. Although they did not modify their foreign policies, these rulers try to expand their empire and made internal alterations in the dominion, which contributed to the development of the intellectual autonomy. They focused on rationalizing as well as promoting reforms and tried to protect the natural rights of people. For example, the ‘French Declaration of Rights’ that showed the types of freedoms individuals were entitled to. These kinds of modifications allowed people to voice their opinions. Now they believed both in nature and in advancement because it is their amalgamation that could better the human lives and conditions.

From the aforementioned discussion, it could be fairly concluded that the principles, works, and ideas of enlightenment in the 18thcentury had the potential to affect European nations or even the larger Western world for many more centuries in the future. Although a large number of aspects are responsible for enlightenment, its impact echoed all across the globe.