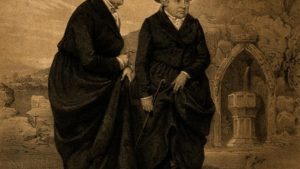 Two 18th-century women, Sarah Ponsonby and Eleanor Butler, are famous for their romantic friendship, which was then a concept helpful for lesbian couples hoping to avoid a scandal.

In her book, ‘The Ladies of Llangollen: A study in romantic friendship’, author Elizabeth Mavor sends the reader back to a particularly scandalising morning after:

“My dear Mrs Goddard I cannot paint our distress.
My dear Sally lept out of a Window last Night and is gone.
We learn Miss Butler of the castle is with her. I can say no more…
We are in the utmost distress and I am sure you pity us…”

“Sally” was Sarah Ponsonby – an orphan – charge of her late father’s cousins, Sir William and Lady Betty Fownes. Miss Butler “of the castle” was Eleanor Butler: intellectual and passionate, with biting wit. At 29, she was asked to keep a friendly eye on Sarah who’d been placed at Miss Parke’s School near Kilkenny castle in 1768.

Eleanor made a big impact on teenage Sally. 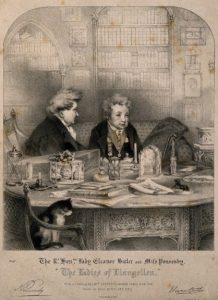 Lady Eleanor Butler and Sarah Ponsonby, known as the Ladies of Llangollen, seated in their library / Wellcome Collection, Creative Commons

The two women were drawn together by a love of French philosophy, long walks and novels such as ‘Clarissa’ and ‘Millenium Hall’. They planned to live together in romantic retirement, à la Rousseau. Retirement, 18th-century style, meant a retreat from fashionable society to a picturesque setting where one could concentrate on ‘improving’ activities: reading, learning languages, gardening, sketching, charitable works, etc.

Sarah’s dramatic leap from a window, complete with pistol and lapdog Frisk, had got them nowhere. The two women were caught and separated: “Sally” feverish after sleeping in a barn; Eleanor distraught, desperate, under pressure.

The 18th-century concept of romantic friendship that Mrs Tighe refers to might once have been helpful to lesbian couples hoping to avoid scandal. It appeals in the 21st century (and may be making a comeback in the guise of queerplatonic) because it offers a more fluid idea of love and passion, suggesting that such intense feelings aren’t restricted to sexual relationships.

There is a less appealing side to the concept, however. Lillian Faderman has described the lifestyle of the Ladies of Llangollen as ‘conservative’: they were not quite the social rebels they might seem. The context of their rural retirement was understood by fashionable intellectuals; they were still women of their background and class in many ways.

If 18th-century women lived within particular boundaries, had wealth or status, and were sexual beings only in relation to men, they were invisible. Once a woman stepped outside this boundary, her cloak was removed and she could be seen. This happened to a contemporary of the Ladies, Anne Seymour Damer, who chose to live an independent life as a sculptor and became the subject of gossip as a result. “Mrs Damor [sic] a lady much suspected for liking her own Sex in a criminal Way…” writes Hester Piozzi (a nearby friend to Sarah and Eleanor) in a 1790 diary entry. The Ladies were never viewed in such a way.

Eleanor and Sarah’s first attempt at elopement failed, but a second attempt was allowed to succeed, so worn down was everyone by trying to keep the two women apart. The ladies settled in the Vale of Llangollen. There they found a simple stone cottage with windows like a child’s symmetrical drawing. 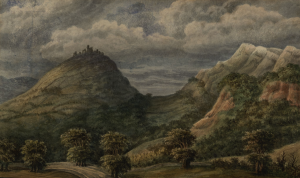 Plas Newydd came complete with a sublime peak hanging over it and a thrilling ravine for melancholy and ‘improving’ walks. The cottage was soon to be improved, too – its plain windows gothicked beyond recognition. The postcard below shows its interior, intensely decorated with wooden panelling and carving, some of this presented as gifts by guests, some collected from abandoned grand mansions and churches (‘found objects’), perhaps representing the life the Ladies had to leave behind. 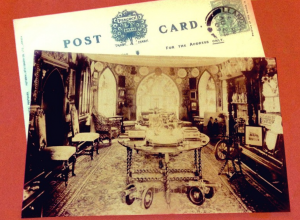 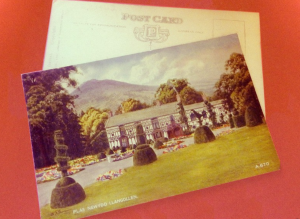 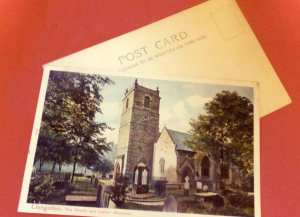 Their lifestyle – the cottage with its wild setting, simple dairy, 40 varieties of rose, ornate kitchen gardens, peach trees and vines, wonderful library of finely-bound books (their initials embossed in gold: E B on the front, S P on the back) – attracted the intellectuals and socialites of the day.

Visitors included Anna Seward, Lady Caroline Lamb, Arthur Wellesley, Thomas De Quincey and Robert Southey; Wordsworth composed a sonnet in their garden. They were able to live as they wanted without being the subject of salacious gossip.

The Ladies’ lifestyle didn’t just appeal to the fashionable though, as this touching account from a 19th-century vicar makes plain.

Some newspaper accounts from a slightly later period offer a similar view of them, albeit more sugary and sentimental.

There was another Lady of Llangollen. Her name appears on one side of the three-sided memorial outside Llangollen church; the names of Eleanor Butler and Sarah Ponsonby are on the other two sides. This third lady is Mary Carryll. As a servant she was almost invisible to society then, but her compelling life is revealed in Eleanor’s journal. Mary had been with them from the beginning, helping Sarah to leap from the window all those years ago, and she remained with them until she died in 1809. Eleanor and Sarah died within a few years of each other with Sarah the last to go in 1831.

The house is now open to public, but it isn’t quite as it was. Later owners of Plas Newydd, in misguided tribute to the Ladies, further ‘improved’ the house into the strange black and white confection it is today.