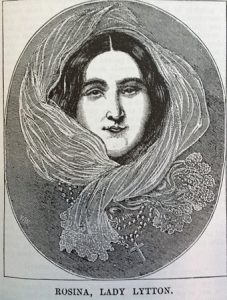 The life of Rosina Bulwer Lytton provides a fascinating insight into the attitudes towards women and mental health in the 19th century.

Dismissed for years as the mad wife of the novelist and politician Edward Bulwer Lytton, Rosina was in fact a prolific author in her own right. Impressively, she had 14 books published. One of these, A Blighted Life, is a controversial personal memoir of her own experience.

After she became estranged from Edward Bulwer Lytton in 1833, Rosina spent several years in France exiled from her children. On her return to England, she sought vengeance by publicly opposing him and threatened to ruin his political career. To silence her, in 1858 Edward had her committed ‘insane’. Under the supervision of Mr Robert Gardiner Hill, a British surgeon who specialised in the treatment of lunacy, she was incarcerated in a psychiatric hospital.

Despite the “fine” surroundings in which Rosina suddenly found herself, understandably she was enraged by her imprisonment. Sarah Wise in her book Inconvenient People: lunacy, liberty and the mad-doctors in Victorian England  describes Rosina’s case in detail. According to Wise, it is likely that Hill sent her to his private hospital, Inverness Lodge, a small but plush residence. 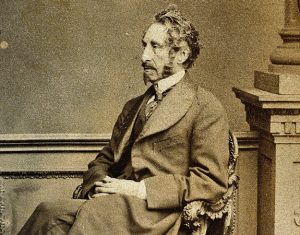 Thanks to Rosina’s public profile, an outcry ensued and she was released after just three weeks at the request of her son. The preface to the 1880 edition of A Blighted Lifedescribes her case as “a narrative of persecution of the most base and unmanly kind, practised by a wicked Man of great talent and resources, upon a Noble Lady, who had hardly anything to defend her but a high spirit, a consciousness of innocence, and a resolve not to be crushed”.

The injustice of her case is put into context: “Never was a more criminal or despotic Law passed than that which now enables a Husband to lock up his Wife in a Madhouse on the certificate of two medical men, who often in haste, frequently for a bribe, certify to madness where none exists.”

It appears Rosina was not alone in her predicament, as the preface highlights:

“thousands of persons, perfectly sane, are now imprisoned in private asylums throughout the Kingdom; while strangers are in possession of their property; and the miserable prisoner is finally brought to a state of actual lunacy or imbecility – however rational he may have been when first immured”

Rosina’s nightmarish experience unravels through her account. On arriving at her “prison”, she was led to a large bedroom in which the windows were “duly nailed down”. From her sealed window, she observed “between 30 and 40 women walking in the grounds”. 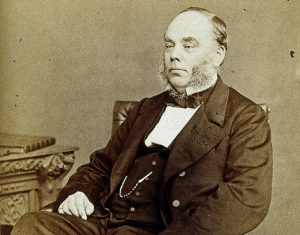 When Rosina questioned whether the “poor creatures” in the mad-house really were insane, Hill tried to play down Rosina’s concerns: “Mad-house, mad-house, nonsense! Lady L-, this is no mad-house, and those are my children.” Clearly not convinced, Rosina replied “Then you must be a perfect Danaus … for there are about 50 of them.

The house rule was to retire to bed with a mere two inches of candle for fear of some mad incendiary and the room was then double-locked from the outside. But as Rosina considered herself “not either mad or an incendiary”, she resisted the candle rule. However, she “could do nothing against the locked door”. She relates:

Everything was so atrociously bad in this fine house that I really could not eat, and I believe H_ began to fear that I should die upon his hands.

On being asked by Hill what she breakfasted on normally, she replied, “What I am not likely to get here, Mr-, an appetite.”

Despite Rosina’s alleged mental instability, Hill permitted his eldest daughter to tend to her. Rosina became very fond of the daughter and they were allowed to drive out on their own: “As caged birds are always wild when they do get out, Mary Hill and I took to running races.

During her stay, although she was invited to sit in the “really magnificent groined lofty roofed banqueting room”, Rosina preferred her own company: “even with my own ills, to Mrs H- and all her ills, – which with the greatest ill of all – her husband!”. It is not surprising perhaps to read in Wise’s book that Hill claimed Rosina was foul-mouthed on arrival and talked “in the most disgusting way” to his wife. Rosina had no respect for Hill and treated him with disdain for her wrongful incarceration. She was perpetually irritated by the “eternal phantasmagoria wagging of his head, and rolling of his eyes”.

John Connolly, a believer in more humane methods towards the insane, was also called upon to examine Rosina by her husband, but Connolly was met with derision by Rosina. “When I had been there about ten days, those patent humbugs the Commissioners made their visit. They were Dr. H – and that vile old Dr. C – who as Dr. Oily Gammon Roberts said, would sell his own mother, or do anything else for money”.

Rosina Lytton Bulwer was released because she had a voice but, as the preface claims, many more were not so lucky.