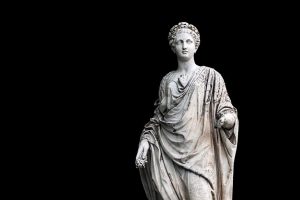 Marble statue of Roman Ceres or Greek Demeter. The Romans inherited their idea of human nature from the Greeks. Shutterstock

The Greco-Roman society believed that people weren’t born human, they became human. But how can humanity be defined?That’s what the project of decolonising the humanities could be dedicated to. 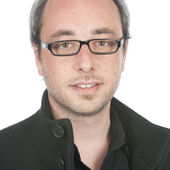 To be human has always meant one thing – since Greco-Roman antiquity at any rate. It has meant to be civilised, that is, having good habits and fine taste, and governing one’s life rationally.

The Romans of the 1st century BC heard in the word ‘human nature’ (humanitas) two things: being educated in the liberal arts, and sympathy for others regardless of their social station, whether they were master or slave. The ideal human being – that is, the ideal Roman – was someone who combined in himself the older virtue of severity or strictness with the virtue of kindliness that had become popular by Cicero’s time.

One was not born human. One had to become human. One was humanised through the inculcation of good habits and through the liberal disciplines that during the Italian Renaissance came to be called the ‘humanities’.

The Romans inherited their idea of human nature from the Greeks of the 5th century BC. The Greeks were perhaps the first to hit on the idea of mankind  as a group defined, beyond gender, race, and class, by a characteristic common to all humans.

The Greeks believed that the bond that holds humanity together is reason or speech. They believed that, by teaching and learning, communication and discussion, reason joins men in a natural fellowship.

There was a deep connection in their mind between reason, freedom and democracy. One made full use of one’s reason in the affairs of state. This consisted in deliberating with others on what is just and unjust for the community. One had to be an active member of a democratic community in order to fully realise one’s human nature.

Does this connection between reason, freedom and democracy represent a particular Western prejudice? Or has Greco-Roman antiquity discovered something true that is of universal significance?

The ‘civilised man’ versus the ‘barbarian’

On the one hand, there is something to be said about the idea of mankind as a group defined, beyond gender, race, or class, by a characteristic shared by all humans. On the other, I am not convinced that reason or speech is a characteristic free of prejudice.

The Greco-Roman idea of humanity is unthinkable without its opposite. Since to be human is to be civilised, those who behave inhumanly are the uncivilised or barbarians.

Who is the barbarian? He is the stranger or foreigner, the one who speaks in a strange tongue. More precisely, he is someone whose speech is unintelligible or who makes incomprehensible sounds like an animal.

The barbarian is someone who is thought to be more of an animal than a human being, yet without being either the one or the other. He is something in between a human and an animal. He is bestial or beastlike.

The word ‘barbarian’ was used to refer to the native or savage, the wild (untamed) man, the cruel man who lacks grace.

The Greeks used this opposition between the human and the barbarian in the 5th century BC during the Greco-Persian  wars.

In their ideological warfare against the Persians, the Greeks constructed an image of themselves as the only free people living in a democratic state. In their eyes, they were fighting ‘slaves’, which to them also meant a group of people subject to the rule of a monarch.

There appears to be more than an accidental connection between this Greek self-image and the image the West projects of itself in its relation with the Middle East. This has been apparent since the publication of Samuel Huntington’s The Clash of Civilizations and the Remaking of World Order in 1996, and 9/11.

The West identifies capitalism, liberalism and democracy as markers of civilisation and progress against Islamic fundamentalism, theocratic rule, and what it irresponsibly calls ‘the Muslim world’.

When an act of terrorism perpetrated by an Islamic group is described as ‘savage’ or ‘barbaric’ by Western leaders and the media, we must hear in this not only the condemnation of a whole culture as ‘barbaric’, but also a desire to oppose to it Western culture as ‘civilized’ and ‘humane’.

This appraisal is designed to mask the violence of the West’s continued military presence in the Middle East for purposes other than ‘liberation’ or ‘freedom’.

The history of the idea of human nature since the 5th century BC represents the history of Western violence and domination. It bears witness to some of the deepest conflicts and divisions the earth has seen.

Think of the category of the ‘subhuman’ used by the Nazis. European colonialism is also unthinkable outside of the dichotomy between the ‘civilised’ and ‘barbarian’. Racism, which was invented at the dawn of capitalism to justify the continuation of the slave trade and the use of African slave labour in North American colonies, irreversibly modified the Greco-Roman idea of the human being.

To be human no longer only meant to be civilised in the sense of having a liberal education. It now also meant – and has since meant – to be Christian and white, to be middle class, heterosexual and male.

As a consequence, anyone who is identifiable as female, black, working class, or non-Christian is automatically judged to be less rational, wilder, untamed, or barbaric.

Is there a way to think of the human being beyond the opposition between the ‘civilized’ and the ‘barbarian’? Or is such an idea of mankind yet to be invented?