Maya civilization developed in a territory the size of Germany and Denmark together. 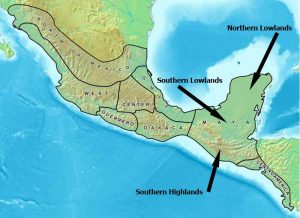 Obscured by the fame of the Aztec empire or shrouded by a veil of mystery, the cultural history of the Mayas has generally been misunderstood by the British public. Maya civilization developed in a territory the size of Germany and Denmark together (nearly 400,000 km2). This vast territory shows three distinctive ecological and cultural sub-regions: the Northern Lowlands, which covers the Yucatan peninsula; the Southern Lowlands, which includes Belize, the Guatemalan Petén region and parts of Chiapas; and the Southern Highlands, which refers to the Guatemalan mountainous region. Conventionally, scholars tend to talk of three major periods in the history of Maya civilization: the Preclassic (2,000 BC – 300 AD), the Classic (300 – 900 AD), and the Postclassic (900 – 1550 AD). This periodization only covers the cultural development before the European arrival, thus, implying that the Maya became extinct after this. Yet, the Maya have continued to develop and adapt through the historic periods that I characterise as the European Colonization (1550 – 1821 AD), and the National Modern (1821 AD – to date). 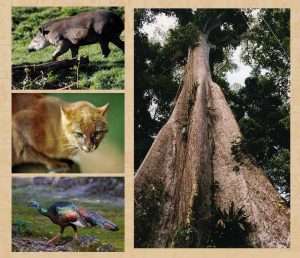 Material evidence places a distinctive Maya culture along the Pacific Coast of Guatemala at 1,800 BC. The environmental setting where the Maya emerged consists of a thick evergreen rainforest canopy rising 40 to 70 m. above the ground, populated by mahogany, rosewood, chicle, tropical cedar, rubber, sapodilla, native palms, and the sacred Maya tree, ceiba (Ceiba pedandra). Fauna in the Maya region comprised the tapir, jaguar, jaguarundi, margay, white-lipped and collared peccaries, paca, and white-tailed and brocket deer in the wild; and the dog, stingless bee, Muscovy duck, and turkey in the backyard. Fishing villages provided marine fishes, mollusks, and other species. Although slash-and-burn, multi-crop (maize, beans, and squash) agriculture has been prevalent for centuries, the Maya also implemented intensive agricultural systems in different landscapes, such as terraces in hillslopes, canals and drained fields in swamps, and orchards in a managed rainforest. 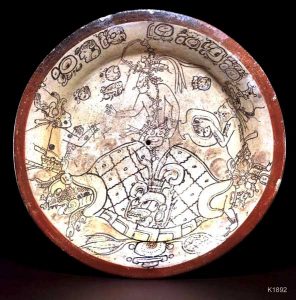 The Late Preclassic period (300 BC – 300 AD) witnessed the emergence of hierarchical society and sacred kingship. Rulers founded their leadership in specialised knowledge and shamanic practice, which linked them to the creator deities. Notable among these were Itzamná and Ix Chel: the Primordial Parents, Kinich Ahau: the Sun God, Pahuatun: the Quadripartite Skybearer, the Youthful Maize God, the Plumed Serpent, the Old Rain God and his Wife, the Hero Twins, among others. Maize was the most important crop for the Maya, who believed the Creators used ground corn to form the bodies of the first humans. Preclassic Maya cities showed temples decorated with painted stucco masks. Building projects were associated with elite ceremonies performed atop the temples for Maya commoners who witnessed from open plazas below. 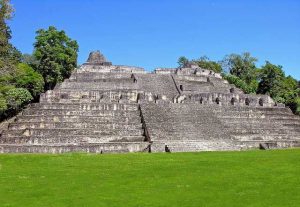 The Classic period is defined by the erection of steles. These upright carved stone monuments advertised the Maya royalty’s feats and customs. Tall pyramids resembling the Primordial Sacred Mountain were covered by finely cut stone façades. Small temples were built atop using the typically Maya corbelled vault technique. Maya regional politics was marked by competing city-states in the Southern and Northern Lowlands where commerce, alliances and warfare defined interregional relations. More than 80 city-states have been identified to date – among them Yax Mutal (Tikal), Oxwitza’ (Caracol), Ox Te’ Tuun (Calakmul), Oxwitik (Copán), and B’aakal (Palenque). An elaborate writing system, the concept of zero, the record-keeping of long time cycles, and a complex grasp of astronomy were the main intellectual achievements of the Classic period. Maya writing was based on hieroglyphs which represented both words, or logograms, and syllabic sounds, or syllabograms. Some 800 separate glyphs were flexibly and variedly used to write in two variants of the Old Mayan language, Cholan and Yucatecan. 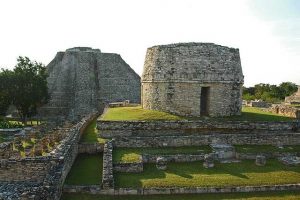 Between 750 and 900 AD, the Southern Lowlands’ urban centres began to decline until becoming completely abandoned. This is the period often characterised as the Maya “collapse”. However, the rural population stayed in the region while urban settlements developed in the Northern Lowlands and Eastern coast. The Postclassic period was defined by the rise of Chichen Itzá (900 – 1,200), and later Mayapán (1,220 – 1440) in the north, while the K’iche’ power expanded in the Southern Highlands (1250 – 1495 AD). These Postclassic Maya polities had forms of government where power was shared between several kings or councils of noblemen. Although the Long Count calendric system (recording dates as old as 3,114 BC) was abandoned during this period, the Postclassic Maya kept the Calendric Round which covered cycles of 52 years. 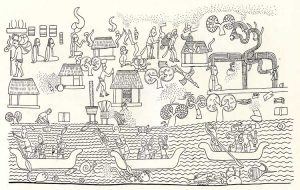 They also continued their hieroglyphic writing in codices, which were leather and bark folding books. At the time of European arrival (circa 1517), Maya political organization in the Yucatán consisted of nearly 16 small “states” ruled by lineages claiming descent from Chichen Itzá and Mayapán. Internal disputes weakened Maya resistance to Spanish armed invasion. In the Southern Highlands, the K’aqchikel allied with the Spaniards to defeat the K’iche’, whereas the Xiw supported Spanish settlers in the Yucatán against the Kokom and other lineages. 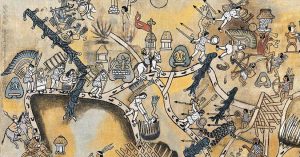 Pic 7: Fragment of the “Lienzo de Quauhquecholan” which depicts the Conquest of Guatemala

Conquest and domination of the Maya was, however, difficult and never complete. The Southern Lowlands remained scarcely populated and became a refuge area for those Maya who refused Spanish rule. The Q’eqchi’ of Verapaz successfully rejected Spanish incursions and, later, their leader Aj Poop B’atz’ negotiated conversion to Christianity as a way to remain autonomous. The Colonisation period compelled the Maya to find a complex balance between acquiescence and resistance. On the one hand, the Maya – organised in “Indian republics” – mastered the rules of colonial administration and won legal cases against Spanish tribute collectors. They quickly adopted Christian trappings but continued their own religious practices; even preserving their old cosmologies in European script, ie. the Popol Vuh and the books of Chilam Balam.

Pic 8: The torture of Jacinto Canek, leader of the Maya rebellion of 1761. Painting by Fernando Castro Pacheco

On the other hand, religious and political leaders constantly revolted against European domination in different parts of the Maya region, ie. the Great Tseltal rebellion of 1712 in Chiapas, and Jacinto Canek’s uprising of 1761 in Yucatán. The Belizean Maya experienced a different colonial history under the British who pushed them inside the deep forests of the Southern Lowlands, and generally failed to engage them for most of the 17th and 18th centuries. 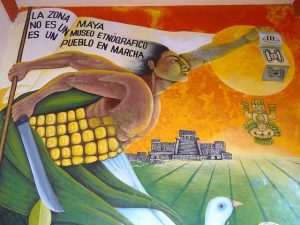 Pic 9: Fragment of mural painted by Maya artist Marcelo Jimenez – “The Maya Zone is Not an Ethnographic Museum

The National Modern period began when Mexico and Guatemala’s mestizo (mixed race) elites gained independence from Spain in 1821 (However, for the Maya in Belize, this period only begins strictly speaking in 1981). The relationship between the new nation states and different Maya communities – defined by the language they speak, ie. Yucatec, K’iche’, K’aqchikel, Q’eqchi’, Tseltal, Tzotzil, Mopan, among more than 30 different Mayan languages – was even more strained than under the Spaniards. The Maya were dispossessed of special rights granted by the Spanish crown and displaced from the lands they occupied for centuries. 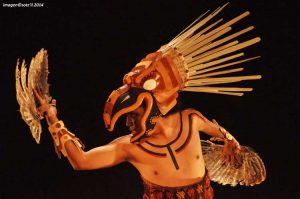 Pic 10: The Guatemalan Performance Group “Sotzil” – From their play “Uk’ux Ulew” (The Heart of Earth) 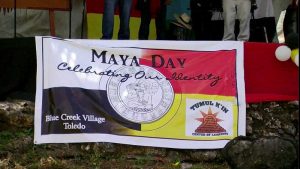 The last quarter of the 20th century saw a growing interest on the part of educated and politically committed Maya to study the archaeological record, historical documentation, and contemporary languages and traditions of their people. This has configured a Maya revival movement that finds expression in critical scholarship, artistic renaissance and anti-colonial politics. The 21st century Maya activism advances the reconstruction of Pan-Maya circuits and networks across political borders, and manifests pride in the long history of this 4,000 year-old civilization of the Americas.