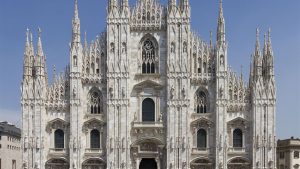 Examining the close interdependence of medieval science, technology and religion: the Cathedral.

Cathedrals are my favorite memorial of medieval Europe—soaring high into the air, their huge vaults seemingly almost weightless upon thin stone pillars, glowing with the radiant light of countless panes of brilliantly colored glass: cathedrals are(  wonder incarnate, and one of humanity’s enduring artistic masterpieces .

To build these architectural marvels required enormous skill and enormous resources, but build them they did.  In France alone, during the high middle ages medieval people constructed more than eighty cathedrals and hundreds of large stone churches in the new “Gothic” style.[1]  These depended upon three technological innovations.[2]

These technologies enabled the Gothic cathedral’s construction, but do not explain why they were built in the first place.  For that, we need to understand the meaning of light in the middle ages. 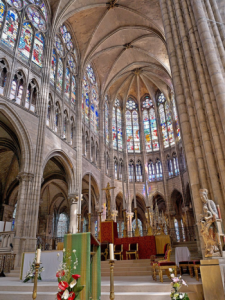 The chancel at the basilica of Saint-Denis in France that illustrates both the cross-ribbed vaulting and pointed arches characteristic of Gothic churches.

Light has long been a metaphor for the divine, as, for example, it appears in the writing of St. Augustine and John the Evangelist (see John 1.5 ).  Yet due to the influence of a late antique theologian, now known to scholars by the tongue-twisting name of Dionysius the Pseudo-Areopagite, light was much more than a metaphor to medieval scholars.  Dionysius argued that physical light was a visible expression of God, a reflection of that divine light that bound the cosmos together and joined it with the being of God.[3]  To medieval theologians, steeped in Aristotle, this was an appealing notion, because it meant that their earthly senses were capable of experiencing the divine, not through some singular miracle or revelation, but through a natural and integral part of God’s creation.  This inspired them to subject light to detailed scientific study.

Robert Grosseteste (1170-1253), the bishop of Lincoln, studied Arabic optical science, and carried out his own research on refraction and reflection.  He knew that curved lenses could make objects appear larger or smaller, and suggested that they could be used to make a magnifying glass.[4]  Indeed, reading glasses are first found in Italy in the 1280s, and their invention may very well be indebted to Grosseteste’s work .  Yet the bishop was not simply curious about light: he also composed a Latin translation of Dionysius, and wrote about light as “a divine essence,” and “an emanation from God.”[5]  Grosseteste’s most famous student, the English Franciscan Roger Bacon (d. 1294) continued his master’s work, studying the refractive properties of water, the anatomy of the eye, and Islamic optical science, which his writing made available to the Latin world for the first time.

A drawing from Roger Bacon’s Greater Work (Opus Maius) that illustrates the refraction of light through a pillar of water.

The origin of Gothic architecture lies in this same understanding of light.  When the abbot Suger began to supervise the reconstruction of the ancient Church of Saint-Denis in the mid-twelfth century, he embraced the new architectural style explicitly in order to fill his church with light, so that through great windows of colored glass worshippers could be joined with God.  For Suger, the light of the great windows illuminated the hearts of those within just as the words of scripture illuminated their souls.[6]  It is no accident, then, that medieval churches were also home to illuminated Bibles, their pages painstakingly covered with finely hammered gold so that they literally glowed with the reflected light of God. 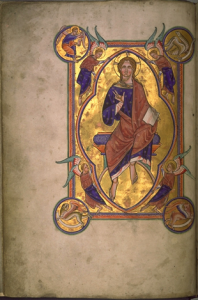 The light reflecting from the gold leaf adorning this illustration of Christ in Majesty should give you a good idea of how medieval “illumination” gets its name.

These ideas and their expression in Gothic churches and stained glass took the medieval world by storm and were repeated many times.  Just as one example, several hundred years later, toward the end of the high middle ages, another French bishop, William Durandus, wrote that, “The glass windows in a church are Holy Scriptures, which expel the wind and the rain, that is, all things hurtful, but transmit the light of the True Sun, that is, God, into the hearts of the faithful.”[7]

So here we see how some of the most important developments in medieval science, religion, and art are all expressions of a common cultural imperative—to  better know God—and a common worldview in which light was God’s visible expression.  This example gives us an opportunity to reflect that neither science nor technology exists in a vacuum: To understand either science or technology, one must grasp its cultural dimensions along the bare facts.  This in turn allows us to observe that technology should not be viewed as purely utilitarian—it is not all about building a better toaster — but responds to the cultural imperatives of the societies in which it is embedded.  Similarly, science should not be judged simply by how well we think it models the natural world; it should be appreciated for how it integrates nature and human culture, how it “makes sense” of natural phenomena within the framework of a particular world view.  From this perspective, we can see that medieval Christianity should not be viewed as somehow antagonistic toward science or technology, and that neither should medieval science and technology be denigrated as being backwards or stagnating.  Far from it: medieval people were remarkably adaptable and innovative when innovation was compatible with their culture. They embraced mechanization and labor saving technologies, the development of universities and new centers of learning, as well as the tenets of Aristotelian naturalism — all of which laid the groundwork for the new light and learning of the modern age.

Originally published by REBUS Community Pressbooks, in History of Applied Science and Technology, under the terms of a Creative Commons Attribution 4.0 International license.