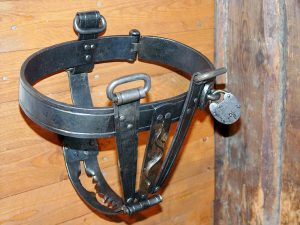 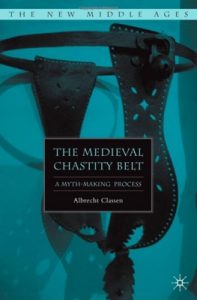 Why would any serious medievalist turn his/her attention to this most spurious object, the medieval chastity belt, and examine its alleged reality and dissemination all over the world? Most people, both within the academia and outside, tend to chuckle when they hear about this chastity belt because they don’t know much about it and yet have a certain understanding from the modern media, and because it allows them to think and speak about the female sexual body in a seemingly legitimate fashion.

Basically, the chastity belt, so the story goes, served a crusader knight to protect his wife from unwanted, or at least illegitimate, sexual contacts during his absence. More specifically, the husband placed such a belt on his wife’s body out of fear from wooers who could abuse the opportunity and sleep with her while he was fighting for God in distant lands. Jokes and humorous accounts about medieval sexuality intimately combine to attract many people who otherwise would have no interest in the Middle Ages. We also laugh about the chastity belt because it symbolizes in a complex manner the husband’s impotence, or his fear of competitors, and particularly universal worries by men that they might not be able to control their wives’ sexuality. Little wonder that modern feminists have regularly railed against this ‘monstrous’ strategy of repression allegedly employed by husbands in the Middle Ages, but very few cultural historians have ever closely examined the sources where we discover references to the chastity belt.

Laughter, however, has regularly revealed much larger issues at stake, and there is hardly any really ‘harmless’ joke, especially when the topic of sexuality is at play. Humor and comedy are huge and complex topics closely associated with epistemology, anthropology, sociology, medicine, and even philosophy. The topic of the chastity belt hence proves to be important not so much as to whether it existed or not, but rather as to the phenomenon itself that people talked about it in the first place. It is critically important to understand why someone is telling a joke, what purpose s/he might pursue with it, and what the ultimate intent might be; we also must comprehend why the situation, object, or people we are laughing about would be so risible.

To approach the medieval chastity belt as a theme hence requires that we investigate, first, whether such an object actually existed in the past, irrespective of the vast number of specimens that still can be found in so-called medieval torture museums all over the world. Second, we are called upon to examine closely the discourse on the chastity belt at least since the seventeenth century, which subsequently entered into a quasi-scholarly debate that has been rather tantalizing over the decades because in this particular case most principles of critical arguments have been commonly disregarded or undermined. We could also add a third component which makes the discussion of the chastity belt so important and revealing. Much of what we assume to know about the Middle Ages, or any other phase in cultural history, proves to be handed down to us through epistemological filters that regularly threaten to transform the reality behind it and convey to us, hence, mostly mythical concepts that need to be analyzed meticulously before we can claim any real comprehension. One powerful example would be the modern assumption that people in the Middle Ages believed that the earth was flat. Nothing would be further from the truth, but even an overwhelming amount of evidence stating the very opposite does little to solve the issue, since popular opinions are highly influential particularly because they are not well founded and disregard most historical details.

The chastity belt, as I have observed in my book The Medieval Chastity Belt (2007), was first mentioned by a German engineer/artist, Conrad Kyeser, in 1405, in his treatise on siege machines and similar objects. While he was very serious about those gadgets, he then offered a number of hilarious examples of contraptions that were the products of pure imagination, such as the chastity belt. Since he identified it as having originated in Florence, there might have been earlier references to this ominous object serving to control a woman’s sexuality. But it is a joke, nothing else, as the context and the monstrosity of the metal cage indicate. This joke obviously appealed to a number of satirical writers and artists in the following centuries, who fully understood the great value of the chastity belt for their own purposes to entertain their audiences. Indeed, the literary examples that I could uncover consistently belong to the genre of satire, while the chastity belt never appears in serious texts or art works. No author of sermon literature, of penitentiary texts, or didactic and legal writers has ever mentioned the chastity belt probably because already the basic idea behind it defies the basic needs of the human (female) body. At the same time, consistently those writers/artists who mentioned the chastity belt only reflected on and played with men’s dread of female power, especially with regard to sexuality.

All this would have been marginally interesting regarding anecdotal aspects of the late Middle Ages, but the theme of the chastity belt subsequently gained major significance in the nineteenth century when many authors of scholarly and less scholarly works began to harp on the chastity belt as a monstrous instrument used by medieval husbands to subjugate their wives. This was also the time when ever more popular medieval torture museums were established all over Europe, mostly supplied by modern (!) objects produced in England at that time. Indeed, it also became fashionable to write about the chastity belt as a convenient topic in order to meet prurient interests during the repressive Victorian age.

Since the twentieth century the interest in the chastity belt has waned, though it continues to serve ominously warning modern women of men’s horrible actions against their wives. But until the publication of my book in 2007, most lay authors and also many scholars simply assumed that the chastity belt had been in existence in the Middle Ages and was commonly used by knights departing for a crusade or other military operations. Most of those concerned with the history of sexuality have fallen into the trap of this mythical object from the past, which was a hoax already in the fifteenth century, and became the biggest hoax of historical museums since the nineteenth century. The treatment of the medieval chastity belt thus proves to be an ideal case study of how our knowledge of the Middle Ages has been determined and shaped by modern-day interests and (mis)conceptions.