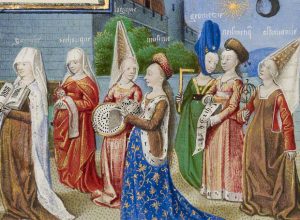 Philosophy Presenting the Seven Liberal Arts to Boethius (detail), miniature in a French manuscript of The Consolation of Philosophy attributed to the Coëtivy Master, about 1460–70

Clothing changed with the times in manuscripts and real life

By Annelisa Stephan
Editor, The Iris

A “fashion revolution” in the Middle Ages? Yes, says art historian Roger Wieck, curator of Illuminating Fashion: Dress in the Art of Medieval France and the Netherlands at the Morgan Library. Just as art was changing with the dawn of the Renaissance, so, too, was clothing. I asked him to explain.

What was the “fashion revolution” of the late Middle Ages?

Around 1330, due to the invention of the set-in sleeve and the use of multiple buttons, tight clothing for both men and women became available. It was this “fashion revolution” that forever distinguished men’s and women’s clothing.

Do the lavish ensembles we see in illuminated manuscripts—such as the gowns and hats in the illumination shown above—reflect what people actually wore?

Yes, but you have to be careful in interpreting each picture. Artists did depict actual clothing, but they also included fantastic and old-fashioned garments. You also have to keep in mind artistic license. People in real life were hardly as thin, with waistlines as narrow, as those seen in medieval art.

And manuscript illuminators used fashion not only to set a scene, but also to comment on the characters they depicted.

The most fashionable people in medieval art are often the bad guys. For women’s clothing, look to what the temptresses and prostitutes are wearing. For the men, look at the teenage boys and executioners. The tormentors of Christ are usually dressed to the nines. 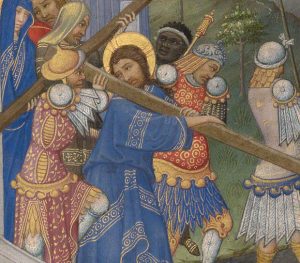 Soldiers dressed to the nines in The Way to Calvary (detail) in a French book of hours, Spitz Master, about 1420

Was medieval and Renaissance fashion influenced by events of the day, such as the Hundred Years’ War and the bubonic plague?

Yes—for example, there was a “fashion freeze” in France from about 1350 to 1390 due to the duress of the Hundred Years’ War and the strike of the Black Plague.

King John of France died in London as a prisoner of war.  Military costume influenced clothing worn by civilians, who now wore their doublets padded—unnecessary, but it gave them what was then considered the manly hourglass silhouette.

The 1420s were also a tough time for France: the northern half of the country, including the capital, Paris, was occupied by the British. During this decade, too, fashion took a nosedive.

What are some of the most spectacular or fanciful outfits you’ve come across in the pages of illuminated manuscripts?

Surely there is no more elegant clothing than that depicted by the Limbourg brothers in the calendar miniatures of the duc de Berry’s famous Très Riches Heures. Those miniatures are justifiably world famous.

Your exhibition at the Morgan includes four ensembles inspired by manuscript illuminations created using period fabrics and techniques. What did you learn during the process of crafting these replicas?

What I learned from these recreations—the wonderful work of Corinne Roes of Atelier Mette Maelwael—was that no matter how beautiful these garments are in two dimensions, they are unbelievably impressive in three.  And when you see one of these garments actually worn and move in space and time, it knocks your socks off.

Many people know medieval clothing from the movies—such as The Princess Bride or even Robin Hood: Men in Tights. How right, or wrong, does Hollywood get medieval dress?

In conjunction with my exhibition at the Morgan we recently screened Becket from 1964 with Richard Burton and Peter O’Toole. Pamela Brown plays a particularly slimy Queen Eleanor of Aquitaine. She wears headgear from the 15th century—300 years later than the time of the King Henry II—but they’re so deliciously over-the-top that they actually do make her appear particularly dumb-headed.

I see young men on the subway with pointy shoes that remind me of the pouleines of the 14th century, which sometimes forced their wearer to walk backwards. The miniskirt of the Middle Ages was a lot more shocking than today’s, as it was worn by men.

And I think a gentlewoman of the Middle Ages would be pleased to see the return of men’s tight pants—they would remind her of how revealing and flattering were the hose worn in her era.