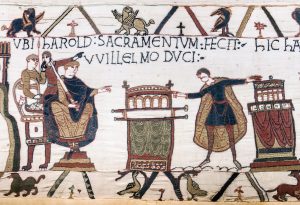 There were laws safeguarding and enforcement of the king’s rights as feudal lord.

Inquisition Post Mortems (IPMs) were part of the safeguarding and enforcement of the king’s rights as feudal lord. This page provides a brief outline of those rights and their relation to the wider feudal system. It is necessarily somewhat simplified; in fact, some of the details of how ‘the system’ worked over our period are still obscure and require further research.

The ‘feudal system’ is a convenient shorthand term for the structure of landholding in which a tenant held land of a lord in return for certain services. ‘Feudalism’ and the ‘feudal system’ are modern concepts, originating in the eighteenth and nineteenth centuries, but  both derive from the medieval term feodum, or ‘fee’, denoting originally land held in return for military service. In England all land was ultimately held of the king.  Land held directly of the king was held in chiefby tenants-in-chief. These might have their own tenants who might in turn have their own tenants, and so on, in theory indefinitely. The tenant at the bottom of this feudal ladder, directly exploiting an estate, was said to hold it in demesne; any lords who stood on the ladder between this tenant and the king were called mesne lords and held the estate in service.

The services by which land could be held were classified, by the thirteenth century, into free and unfree, and the free tenures were free alms (or frankalmoin), military or knight service, serjeanty, and free socage. Free alms was a tenure by which religious institutions held some of their lands. Serjeanty implied the performance of a personal service and could be grand or petty. The distinction between these was not fully clear, although a fifteenth-century authority, Thomas Littleton, stated that grand serjeanty consisted in performing a personal service to the king, such as carrying his banner, whereas petty serjeanty involved rendering a bow, sword, or similar ‘small thing pertaining to war’. Military tenure or tenure by knight service was in origin the service of providing one or more knights to serve the king or a mesne lord. The amount of service owed was expressed in terms of whole or fractional knights’ fees, for example 5 or 1/40. (The knight’s fee was also a piece of land, which could vary greatly in area.) Socageencompassed most other free tenures, such as rent in kind or money rent (also called tenure in fee farm), although burgage, the tenure characteristic of cities and boroughs, had slightly different rights and obligations.

If land was held in return for services, in particular military services, many difficulties potentially arose when a tenant died. He might die without an heir, or leaving an heir who was under age and so too young to perform the required services. He might die leaving a widow: if she married again, her future husband would be  responsible for performing the services, and he might be unfit or an enemy of the lord. In such situations the lord’s rights were protected in various ways. If there was no heir, the lord had the right of escheat: the land returned to him. If the land was held by knight service or grand serjeanty (or, only in a very few cases, by socage), and the heir was under age, the lord had the right of wardship and marriage: the custody of the heir’s lands and also his person, and the right, within limits, to marry the heir to a person of the lord’s choosing. The profits from these rights provided some compensation for the lord’s loss of services from his tenant. Wardship lasted until a male heir was twenty-one; until a female heir was sixteen, or fourteen if she had been married or betrothed at the time of her ancestor’s death. If the tenant was a widow, the lord had the right to consent to any re-marriage.

Even if a tenant died leaving an heir who was old enough to inherit, the lord had the right to relief, a payment made by the heir on inheritance as an acknowledgement of the lordship: relief was payable by tenants in socage and serjeanty as well as knight service, but not by tenants in burgage.

The king exercised all these rights over his tenants-in-chief. As king, he also had further rights which were clarified and defined throughout the later medieval period, notably in a later-thirteenth-century memorandum known as De Prerogativa Regis, ‘concerning the royal prerogative’. Most importantly he had the right to primer seisin. This allowed him to take the profits of lands held of him, when a tenant’s heir was of full age, during the interval between a tenant’s death and the formal succession of the heir. He also had the right of prerogative wardship. If tenant x held lands of several lords, each lord could claim the wardship only of those lands held of him. The custody and marriage of x‘s heir belonged to the lord with priority of enfeoffment, that is, the lord who (or whose ancestor) had first granted lands to x (or his ancestor). The king’s prerogative claim, however, over-rode those of other lords. If one of x‘s lords was the king, the king claimed custody of all the lands, even those held of others, and he also claimed the heir’s wardship and marriage, regardless of priority of enfeoffment.

Other aspects of the royal prerogative also feature in the IPMs. One was the king’s right to the wardship of idiots (that is, persons congenitally disabled in mental function) and his responsibility for lunatics (with a severe but not necessarily permanent mental illness, sometimes said to have ‘lucid intervals’). By the late thirteenth century the king claimed the wardship of idiots, regardless of whom their lands were held, and was only obliged to maintain the idiot from the income of his lands. In the case of lunatics the king also had wardship but took nothing for himself. In addition to maintaining the lunatic and his family, the king had to account for the issues of the lands to the lunatic himself, if he recovered sanity, or to be spent for the good of his soul if he died.

Finally the king, in contrast to other lords, exercised some control over lands held of him in chief. By approximately the reign of Edward I (1272-1307) it was established that lands held in chief by knight service could not be granted or alienated without a licence from the king. (The prohibition also came to be extended to lands held in socage: it is not currently clear exactly when or how.) When IPMs describe grants made by tenants-in-chief, they often mention whether such a licence had been obtained; if it had not, the lands were taken into the king’s possession until a fine had been paid.

There were certain limitations to these royal rights. The reissue of Magna Carta in 1217 confirmed that in general the royal prerogative applied only to lands held ut de corona ‘as of the crown’ that is, as part of the crown’s ancient landed endowment. It did not apply to lands held ut de honore ‘as of an honour’, that is, of various honours that had escheated to the crown over the centuries. There was, however, some dispute about exactly which lands were held de corona or de honore. Sometimes such disagreements are clearly visible in the IPMs themselves, as in the inquisition on Robert Naunton which found that he had alienated the manor of Boxted in Essex which ‘is held of the honour of Boulogne which is in the king’s hand as an escheat and is not parcel or member of the crown’ (CIPM xxvi.364). In fact by this date the honour of Boulogne was commonly treated as it were de corona, but evidently the crown’s rights were not regarded as indisputable. While much in the fifteenth-century IPMs thus reflected the crown’s enforcement of long-established rights, the inquisitions could also be part of a dialogue between crown and subject in which aspects of the royal prerogative were questioned and negotiated.