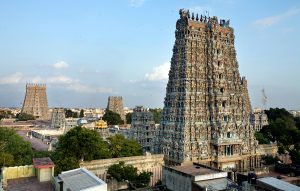 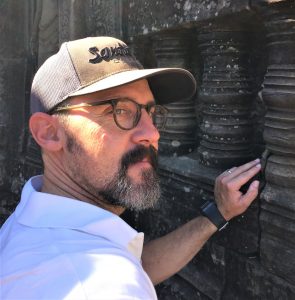 Imagine approaching a temple complex where you are greeted by a soaring gateway more than fifteen stories tall, covered in 1500 brightly painted sculptures of divine and demonic figures. It’s overwhelming and disorienting, but it is just a taste of what awaits the pilgrim or sightseer at the Meenakshi Temple in the town of Madurai in southern India. With its numerous towers and its warren of associated sacred spaces, it embodies the active continuation of an ancient set of religious and artistic traditions in southern India.

Today, approximately 20,000 people per day visit the Meenakshi Temple’s almost 700,000 square feet of space, including the two principal sanctuaries and dozens of shrines of varying sizes. Bordered by high walls and gateways, it is a bewildering  collection of indoor and outdoor spaces: small, cramped shrines, vast halls, low and high ceilings, darkness, light. hustle and bustle, quiet spaces, and chaos. All told, it contains around 30,000 sculptures.

Founded by a god and ruled by a divine couple 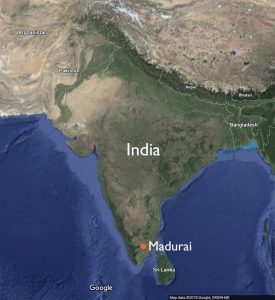 Many sacred sites and structures in India have mythical origins, and the city of Madurai near the southern tip of the subcontinent in Tamil Nadu state is no exception. According to tradition, more than 3500 years ago the god Indra installed a small tower over a naturally formed stone lingam as a sign of devotion to Shiva, one of the primary deities in the vast Hindu pantheon. (Typically considered the god of destruction, Shiva’s characteristics also include creation and virility.) Other gods followed Indra’s lead and began to worship there. Soon a human devotee witnessed the miraculous scene of gods worshipping at the lingam and notified the local king, Kulashekhara Pandya, who built a temple at the site.

The story of the figure of Meenakshi is also legendary. It describes a Pandya king, Malayadhvaja, who hoped for a son and heir. He carefully performed a fire ceremony requesting that the gods fulfill this wish. Instead, he was granted a daughter, Meenakshi, who was born with three breasts. The gods told the king not to worry, but to raise Meenakshi as a brave warrior, just as he would a son, and that when she grew up and met her true love, her third breast would disappear. Meenakshi proved herself gifted in battle, conquering armies in all directions. When she sought to attack the north, however, she was confronted by the god Shiva, who dwells on Mount Kailasha, deep in the Himalayas. Upon seeing him, one of her breasts fell off and the prophecy was realized.

Kumaraguruparar, a great seventeenth-century Tamil poet and devotee of Shiva, described this moment:

When you saw Shiva on the battlefield,
your third curving breast disappeared.
You bowed to him shyly and were amazed to see
that suddenly you had only two breasts.

Your heart was filled only with him.
You looked at him sweetly
with a nectar-like side glance, and felt shy. [1]

Another principal god in the Hindu pantheon, Vishnu (in the guise of Meenakshi’s brother), presided over the wedding of Shiva and Meenakshi, and the divine couple made their home in Madurai, where they ruled (and continue to symbolically rule) as queen and king. 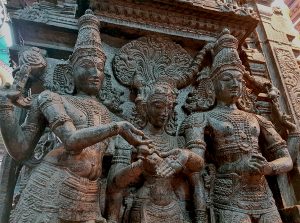 The earliest temple at Madurai was likely constructed in the 7th century C.E., but the temple complex we experience today is largely the work of the Nayak dynasty in the 16th and 17th centuries. They enlarged the complex and redesigned the surrounding streets in accordance with the sacred tradition of the Vastu Shastra (Hindu texts prescribing the form, proportions, measurements, ground plan, and layout of architecture). 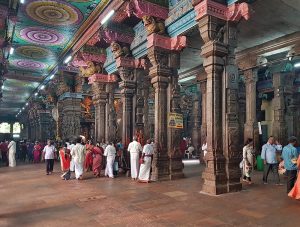 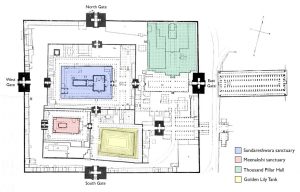 Plan of Meenakshi Temple, from John Murray, A Handbook for Travellers in India, Burma, and Ceylon (London: J. Murray, 1911)

Two principal sanctuaries (accessible only by Hindus) sit at the center of the temple complex: one dedicated to Meenakshi (who is considered a manifestation of the goddess Parvati), and another dedicated to Sundareshwara or “Beautiful Lord” (a form of the god Shiva). A gold finial, visible only from a high vantage point, caps each of these sanctuaries. Fronting each sanctuary is a mandapa (a pillared, porch-like structure) that pilgrims pass through as they make their way to the garbagriha (the innermost sacred areas of the sanctuary).

Each Friday evening, sculpted figures of Meenakshi and Sundareshwara are placed upon a swing in the temple and gently rocked in imitation of a romantic interlude, and each spring they are celebrated in a massive multi-day festival. 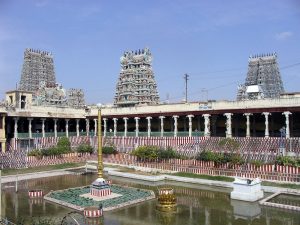 At the south end of the complex is the Golden Lily Tank, which is used by believers for ritual bathing before they enter the sanctuaries of Meenakshi and Sundareshwara. The northeast corner of the complex is occupied by the Thousand Pillar Hall, a vast, ornate mandapa. Although there are actually only 985 pillars, the effect is impressive, with most of the stone pillars carved in high or low relief depicting gods, demons, and divine animals. Originally this space was likely used for religious dancing and musical performances as well as a place to gain an audience with the king. Today the Thousand Pillar Hall functions primarily as a museum, with exhibitions of bronze sculptures, paintings, and objects from the temple’s history. 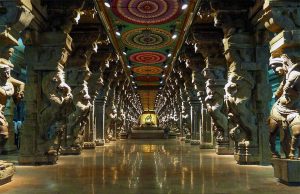 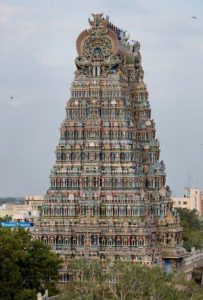 We now return to the most noticeable feature of the complex—the massive towers, or gopuras, which are actually entry gates, marked on the plan above as black rectangles. Some visitors to the Meenakshi Temple in Madurai mistake the gopuras for the sacred temples and shrines themselves. The word gopura may be derived from the Tamil words ko meaning “king,” and puram meaning “exterior or gateway”; or from the Sanskrit gomeaning “cow” and puram meaning “town.” Here, there are fourteen gopuras roughly oriented to the cardinal directions and flanking either the temple of Meenakshi or Sundareshwara, or the entire walled compound. They generally increase in height as one moves further away from the center of the complex, as the outermost sections were continually added to by a succession of rulers, who commissioned ever grander towers as a sign of their power and devotion. The gopurasact as symbolic markers for the sacred space into which they lead and most are covered with a profusion of brightly painted stucco figures representing gods and demons.

The tallest gopura rises to approximately 170 feet and contains more than 1500 figures that are repaired and repainted every twelve years. This multitude of brightly-colored figures excites some visitors and repels others. It is likely that most Hindu temples (just like their ancient Greek and Egyptian counterparts) were painted in vibrant hues, and many are still today. 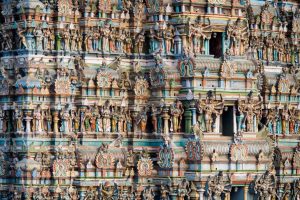 The heart of Madurai 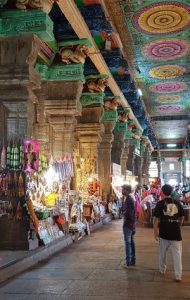 The Meenakshi Temple is in many ways a microcosm of the earthly and spiritual characteristics of Hindu India. It is bustling, crowded, and filled with people from all walks of life. As is true for many Hindu temples, one can find many small shops throughout the Meenakshi temple complex, selling fruits and flowers for offerings, guidebooks, small votive sculptures, jewelry, commemorative t-shirts, and other souvenirs.

The temple’s shrines, pillars, sculptures, and paintings are populated with a dazzling quantity of divine beings who engage in various activities, can manifest in multiple guises and places simultaneously, and are subject to dissolution and rebirth. On the famous gopuras, figures of gods and goddesses are repeated as though reincarnated many times over as they rise towards the heavens, symbolically preventing the defilements of the everyday world from polluting the sacred spaces within.

The Meenakshi Temple is the physical center of the city of Madurai as well as its economic, mythical, and spiritual heart. Its importance radiates outward from the central shines through Madurai to the entire Tamil-speaking region in south India, and beyond.

[1] Kumaraguruparar, “Meenakshiammai Pillaittamai,” translated by Kausalya Hart, in Project Madurai (University of California, Berkeley, 2011)[2] The targeted dismantling and re-use of important structures was a common practice in India both as a practical matter and as a means of expressing a change in royal authority.