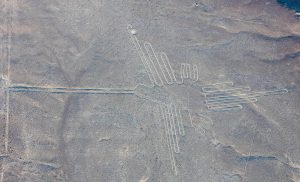 Located in the desert on the South Coast of Peru, the Nasca Geoglyphs are among the world’s largest drawings. Also referred to as the Nasca Lines, they are more accurately called geoglyphs, which are designs formed on the earth. Geoglyphs are usually constructed from strong natural material, such as stone, and are notably large in scale.

Imagine encountering such a drawing. The hummingbird measures over 300 feet in length, and is one of the most famous Nasca Geoglyphs. Among the other celebrated geoglyphs of mammals, birds and insects are a monkey, killer whale, spider, and condor. Various plants, geometric shapes (spirals, zigzag lines and trapezoids), abstract patterns, and intersecting lines fill the desert plain, known as the Pampa, an area covering approximately 200 square miles near the foothills of the Andes. The zoomorphic geoglyphs are the oldest and most esteemed. Each appears to have been made with a single continuous line.

Today it is believed that the geoglyphs were created by the Nasca people, whose culture which flourished in Peru sometime between 1-700 C.E. They inhabited the river valleys of the Rio Grande de Nasca and the Ica Valley in the southern region of Peru, where they were able to farm, despite the desert environment—one of the driest regions in the world. The high Andes Mountains to the east prevent moisture from the Amazon from reaching the coast, so there is very little rainfall; water that does arrive, comes from mountain runoff. 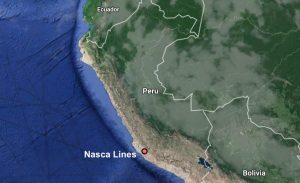 Map showing the location of the Nasca geoglyphs, map © Google

The Nasca people are also famous for their polychrome pottery, which shares some of the same subjects that appear in the Nasca Geoglyphs. Remains of Nasca pottery left as offerings have been found in and near the geoglyphs, cementing the connection between the geoglyphs and the Nasca people. Because the quality of the ceramics produced in Nasca is very high, archaeologists deduce that specialists shaped and painted the pottery vessels. This suggests a society that, at its height, had a degree of wealth and a division of labor. However, the Nasca people had no writing. In cultures without writing, images often assume an increased level of importance. This may help explain why the Nasca came together to create vast images on the desert floor. 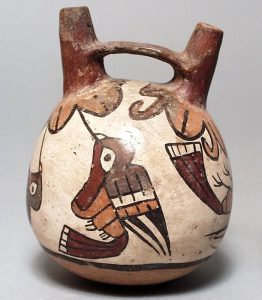 How were they made?

Since the Nasca geoglyphs are so large, it seems clear they were constructed by organized groups of people and that no single artist made them. The construction of the geoglyphs are thought to represent organized labor where a small group of individuals directed the design and creation of the lines, a process that may have strengthened the social unity of the community. Despite the impressive scale of the geoglyphs, these remarkable works did not require complex technology. Most geoglyphs were formed by removing weathered stones from the desert floor, stones that had developed a dark patina known as “desert varnish” on their surface. Once removed, the lighter stones below became visible, forming the famous Nasca Lines. The extracted darker stones were placed at the edges of the lines, forming a border that accented the lighter lines within. Straight lines could be created by extending cords, one on each side of the line, between two wooden stakes (some of which have been recovered) that guided workers and allowed for the creation of sight lines.

For larger geometric shapes, such as trapezoids, borders were marked and then all the stones on the interior were removed and placed along edges or heaped in piles at the edges of the geoglyph. Broken pottery has been found mixed with the piles of stones. Spirals and animal shapes were made in a similar manner. Spirals, for example, would be formed by releasing slack in a cord as workers moved around in a circular path, moving further and further from the center where the spiraling line begins. For animal forms, such as monkeys, whales, or hummingbirds, portions of the figures might be made in the same manner as the spiral in the monkey’s tail, or the image might be based on a gridded drawing or textile model that was enlarged on the desert floor where lines were staked out to create the figure.

When were they made?

The oldest of the Nasca Geoglyphs is more than 2000 years of old, but, as a group, the Nasca geoglyphs were created over several centuries, with some later lines or shapes intersecting or overlapping with previously created lines. This is just one of the unusual features of these geoglyphs. Even more curious, the drawings are best observed from the air, which is why they did not become widely known until the 1920s after the development of flight. Although it is possible to observe some of the lines from the adjacent Andean foothills or the modern mirador, the best way to see the lines today remains a flight in a small plane over the Pampa (lowlands). These amazing images are so large that they cannot be truly appreciated from the ground. This, of course, raises the question: for whom were the lines made? And, what was their purpose? 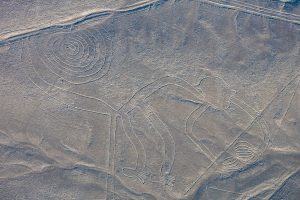 What was their purpose and meaning?

Archaeologists are not certain of the purpose of the lines, or even of the audience for whom the lines were intended since they can only be seen clearly from the air (This is now particularly true of the older animal designs). Were they made to be seen by deities looking down from the heavens or from distant mountain tops? Perhaps the numerous theories that have been proposed will eventually be clarified as our understanding of the cultures of ancient Peru increases.

Shortly after the geoglyphs were first investigated, researchers sought an astronomical interpretation, suggesting that the geoglyphs might be aligned with the heavens, and perhaps represented constellations or marked the solstices or planetary trajectories. While some geoglyphs seem connected to celestial events, such as marking the summer solstice (in December) when mountain waters flow to the coast, it is difficult to find celestial alignments for most of the geoglyphs. As far as we know, Andean peoples did not form pictures by connecting the stars in the night sky as we do; rather they looked at the black spaces between stars and saw shapes that they converted into their own reverse “constellations.” It is important to note that these constellations do not seem to match the Nasca geoglyphs.

Many other reasonable theories have been proposed. Some scholars have suggested that the geoglyphs represent Nasca deities, or formed a calendar for farming, or represented ceremonial walkways. Because some of the lines do seem to direct people to Cahuachi, a Nasca religious center and pilgrimage destination, it seems possible that ancient Nasca people walked the lines. It is also possible that Nasca people ritually danced on the lines, perhaps in connection with shamanism and the use of hallucinogens. The geoglyphs, particularly the early animals which are clearly spaced apart from each other, may also have strengthened group identity and reinforced social interaction patterns as individual groups of people may each have tended or “owned” one of the geoglyphs, perhaps ritually cleaning (sweeping) the pathways as part of the responsibility of ownership. 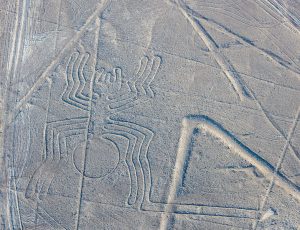 A discredited theory proposed that the geoglyphs are the result of alien contact. While this is sensationalist and helped to secure the popular fame of the Nasca geoglyphs, there is no evidence to support this assertion. Archaeologists and scientists have rejected this proposal and it is important to recognize the implication of this theory is that the Nasca people needed the influence of aliens peoples to create their geoglyphs. We know that the technology to manufacture the geoglyphs was available to the Nasca people and that they had a social system that was fully capable of organizing and producing large geoglyphs. We also know that the designs are consistent with other art forms native to Nasca culture.

Among the most promising recent theories, archaeologists have begun to secure a link between the geoglyphs and farming, which sustained the Nasca people. Some geoglyphs may deal with fertility for crops; others may be associated with the water needed to raise the crops. In a desert, water is the most important commodity. In Andean mythology the mountains are revered as the home of the gods. It has been suggested that the lines were intended to be visible to the gods in the mountains. Some lines also seem to point in the direction of the mountains—the origin of fresh water for the desert South Coast of Peru. Snow pack melts high in the mountains and becomes runoff and a vital source of water for the coast. In fact, ancient underground water channels are sometimes marked on the surface by Nasca geoglyphs, particularly at the points of intersection. These have been dubbed “ray centers,” spots where lines converge. Offerings have been found at these points, including conch shells. The spirals on the desert floor, in the monkey’s tail, and as independent abstract designs, may refer to the spirals found in conch shells and thus may reference water. This same shape appears in Nasca puquios—gradually descending tunnels that tap ancient subterranean aquifers and water channels. Puquios have been described as wells, and formed part of this ancient irrigation system. Puquios, found in Nasca (and elsewhere in Peru), allowed people to reach water in times of drought. Geoglyphs other than spirals may also be directly associated with water. 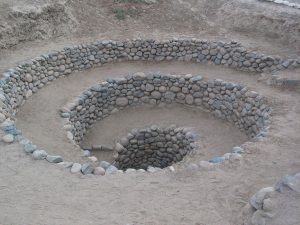 Because the Nasca Geoglyphs were made directly on the earth by rearranging stones on the desert floor, these giant images are actually quite vulnerable to damage. In time the lighter-colored stones exposed by the Nasca people may attain their own patina, making them less visible, but the designs face greater threats from vehicle and pedestrian traffic. Crossing the lines can damage their borders and make the images less distinct. Because of this, the Peruvian government has created a mirador (viewing platform) along the Pan American Highway where visitors can climb to view a few drawings without damaging the lines.

In the end, it is likely that the Nasca Geoglyphs served more than one purpose, and these purposes may have changed over the centuries, especially given that new lines often “erased” older ones by “drawing” over them. It does appear that many geoglyphs made reference to water and agricultural fertility, and were used to promote the welfare of the Nasca people. The geoglyphs were also a place where people gathered, perhaps for pilgrimage, perhaps to walk or dance on the lines in a ritual pattern. As a gathering place, the Nasca geoglyphs may additionally have turned the Pampa into a map of social divisions, where different families or clans tended different geoglyphs. Although we do not know exact details, we can surmise that the geoglyphs represent a community investment meant to serve this ancient people.

Anthony Aveni, Between the Lines (Austin: University of Texas Press, 2000).