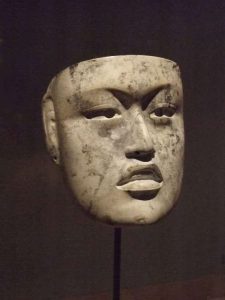 The Olmec civilization presents something of a mystery, indeed, we do not even know what they called themselves.

The mysterious Olmec civilization, located in ancient Mexico, prospered in Pre-Classical (Formative) Mesoamerica from c. 1200 BCE to c. 400 BCE and is generally considered the forerunner of all subsequent Mesoamerican cultures including the Maya and Aztecs. With their heartlands in the Gulf of Mexico (now the states of Veracruz and Tabasco), Olmec influence and trade activity spread from 1200 BCE, even reaching as far south as present-day Nicaragua. Monumental sacred complexes, massive stone sculptures, ball games, the drinking of chocolate, and animal gods were all features of Olmec culture which would be passed on to those peoples who followed this first great Mesoamerican civilization.

The Olmec civilization presents something of a mystery, indeed, we do not even know what they called themselves, as Olmec was their Aztec name and meant ‘rubber people’. Due to a lack of archaeological evidence their ethnic origins and the location and extent of many of their settlements are not known. The Olmecs did, however, codify and record their gods and religious practices using symbols. The precise significance of this record is much debated but, at the very least, its complexity does suggest some sort of organised religion involving a priesthood. The Olmec religious practices of sacrifice, cave rituals, pilgrimages, offerings, ball-courts, pyramids and a seeming awe of mirrors, was also passed on to all subsequent civilizations in Mesoamerica until the Spanish Conquest in the 16th century CE.

Olmec prosperity was initially based on exploiting the fertile and well-watered coastal areas of the Gulf of Mexico to grow such crops as corn and beans (often twice-yearly) which allowed for an agricultural surplus. They also, no doubt, gathered the plentiful local supply of plant food, palm nuts and sea-life, including turtles and clams. By c. 1200 BCE significant urban centres developed at San Lorenzo (the earliest), La Venta, Laguna de los Cerros, Tres Zapotes and Las Limas. San Lorenzo reached its peak of prosperity and influence between 1200 and 900 BCE when its strategic position safe from flooding allowed it to control local trade. Typical Olmec trade goods included obsidian, jade, serpentine, mica, rubber, pottery, feathers and polished mirrors of ilmenite and magnetite. 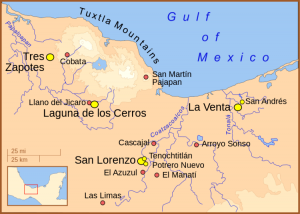 A map showing the principal settlements of the Olmec civilization in Mesoamerica (modern-day Mexico) which flourished from c. 1200-300 BCE. / Madman2001, Wikimedia Commons

Evidence of San Lorenzo’s high culture includes the presence of mound structures, possibly an early ball court, carved basalt drains through one of the man-made mounds and the Red Palace structure with painted red floors and workshops. Around 900 BCE the site of San Lorenzo displays evidence of systematic destruction whilst La Venta, conversely, began to flourish, and becoming the new capital, it eventually supported a population of some 18,000.

The three sites of San Lorenzo, La Venta and Laguna de los Cerros all had a bilateral symmetry in their planning and at La Venta the first pyramid in Mesoamerica was constructed. It is the pre-meditated architectural layout of the religious centres of these settlements that is most striking, for example, at La Venta the buildings are placed symmetrically along a north-south axis with four colossal heads facing outwards at key points, seemingly acting as guardians to the complex. A huge ceremonial step pyramid (now a shapeless mound), sunken plaza once lined with 2-metre high basalt columns, and two smaller pyramids/mounds provide features that would be copied time and again at the major sites of later Mesoamerican cultures with whom equal attention was paid to the precise alignment of buildings. La Venta, as with San Lorenzo, suffered systematic and deliberate destruction of its monuments sometime between 400 and 300 BCE. 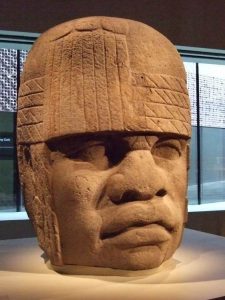 A basalt colossal head from the Olmec civilization of Mesoamerica. Provenance: Veracruz, Mexico, 1200-900 BCE. The significance of the heads is disputed but as no two heads are alike and each headdress has distinctive designs they may represent rulers. (de Young Fine Arts Museum, San Francisco). / Photo by Mary Harrsch, Flickr, Creative Commons

As with other areas of Olmec culture, details of their religion are sketchy. Nevertheless, with an ever-increasing body of archaeological evidence it is possible to piece together some of the most important features of Olmec religion. The Olmecs seem to have had a particular reverence for natural places which connected with the important junctions of sky, earth and the underworld. For example, caves could lead to the underworld and mountains which had both springs and caves could offer access to all three planes. Important Olmec mountain sites were El Manatί, Chalcatzingo and Oxtotitlan.

The names of the gods of the Olmec are not known other than that they often represented phenomena such as rain, the earth and especially maize. For this reason, identifiable gods from Olmec art have been given numbers instead of names (e.g. God VI). The Olmecs gave special significance to the animals present in their environment, especially those at the top of the food chain such as jaguars, eagles, caimans, snakes and even sharks, identifying them with divine beings and perhaps also believing that powerful rulers could transform themselves at will into such fearsome creatures. The Olmecs also liked to mix animals to create weird and wonderful creatures such as the were-jaguar, a cross between a human and a jaguar, which may have been their supreme deity. We also know that they worshipped a sky-dragon and that they believed four dwarves held up the sky, possibly representing the four cardinal directions which, along with other Olmec gods, became so important in later Mesoamerican religions.

The most striking legacy of the Olmec civilization must be the colossal stone heads they produced. These were carved in basalt and all display unique facial features so that they may be considered portraits of actual rulers. The heads can be nearly 3 m high and 8 tons in weight and the stone from which they were worked was, in some cases, transported 80 km or more, presumably using huge balsa river rafts. 17 have been discovered, 10 of which are from San Lorenzo. The ruler often wears a protective helmet (from war or the ballgame) and sometimes show the subject with jaguar paws hanging over the forehead, perhaps representing a jaguar pelt worn as a symbol of political and religious power. The fact that these giant sculptures depict only the head may be explained by the belief in Mesoamerican culture that it was the head alone which bore the soul. 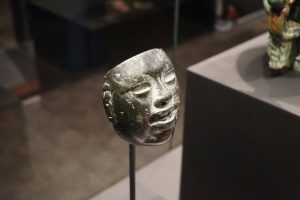 Olmec Mask. Greenstone, 900-400 BCE. Mexico.  This mask is too small to be worn on the face, therefore it could have been jewellery or part of a headdress. The Olmec ruled in Mexico from about 1400 to 400 BCE. They built the first cities in central America. / Photo by Jade KoeKoe, National Museum of Australia, Creative Commons

Another permanent record of the Olmecs is found in rock carvings and paintings. Often made around cave entrances they most typically depict seated rulers, as for example at Oxtotitlan, where a figure wears a green bird suit and at Chalcatzingo where another ruler sits on her throne surrounded by a maize landscape. At other sites there are also paintings of cave rituals, for example, at Cacahuazqui, Juxtlahuaca and Oxtotlan.

Jade and ceramic were other popular materials for sculpture and also wood, some examples of which were remarkably well preserved in the bogs of El Manati. One of the gods most commonly rendered in small sculpture was God IV, sometimes called the Rain Baby, who is a toothless human baby with an open-mouth, cleft head and headband, sometimes with the addition of strips of crinkled paper hanging at the side of his face (another feature seen in the gods of later cultures and representing the paper and rubber sap strips which were burnt during rites as the smoke was thought to propitiate rain).

Perhaps the most significant jade carving is the Kunz Axe, a ceremonial axe-head now in the American Museum of Natural History in New York. The jade has been worked to represent a were-jaguar creature using only jade tools and then polished, perhaps using a jade abrasive. Animals were a popular subject, especially those most powerful ones such as jaguars and eagles. Intriguingly, the Olmecs often buried their sculptures, even larger pieces, perhaps in a ritual act of memory.

The Olmecs influenced the civilizations they came into contact with across Mesoamerica, particularly in sculpture in ceramic and jade and objects featuring Olmec imagery have been found at Teopantecuanitlan, 650 km distant from the Olmec heartland. In addition, many deities featured in Olmec art and religion such as the sky-dragon (a sort of caiman creature with flaming eyebrows) and the feathered-snake god, would reappear in similar form in later religions. The snake-god especially, would be transformed into the major gods Kukulcan for the Maya and Quetzalcoatl for the Aztecs. This artistic and religious influence, along with the features of precisely aligned ceremonial precincts, monumental pyramids, sacrificial rituals and ball-courts, meant that all subsequent Mesoamerican cultures would owe a great deal to their mysterious forerunners, the Olmecs.