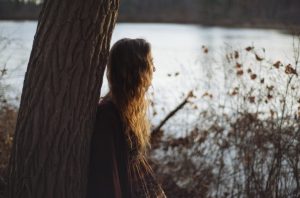 I remember it like it was yesterday. It was the middle of the night, and I was alone pacing across the lawn of my dad’s backyard lit by nothing but the moon. I’m not typically an insomniac, but my anxiety had made me into one, and this particular bout with it was undoubtedly one of the most exhausting I had ever endured.

It was the tenth straight day that severe anxiety refused to let up within me. I barely slept, had no appetite, and had no solution, despite the incredible love and support that I had from those close to me at the time.

I was fully convinced that I would be stuck either in an anxiety attack, or living in fear of the next one, for the rest of my life.

This night celebrated its three-year anniversary just last week, and I now write this article not only well-removed from that particular bout with anxiety, but over a year removed from anxiety even attempting to butt itself into my life.

Did things magically become so incredible that anxiety was pleasantly thrust into the back-burner of my mind? No. I simply flat out refused to accept that as my reality and I sought out everything that I could to put an end to this “shitty” experience.

The One Thought Fuelling It All

The deeper I dug into my anxiety, the simpler its main source presented itself to be. It wasn’t the circumstance, the environment, a physical feeling, or the actions of another that would feed the fire; these were simply the igniting trigger.

The one thought fuelling my anxiety more than anything else was the belief that it was stronger than me, and that I was therefore a victim to it.

If you’ve ever experienced anxiety, this thought likely seems completely logical. We both know that anxiety is capable of and has struck without a moment’s notice, and that when it does, it’s quite easy to feel like a helpless victim to it.

But no matter who you are, and how severe your struggle with anxiety is, I can promise you that this belief is just that… a belief!

It’s a Matter of Perspective

We are always in control of our reaction to things, and it is only when we inflate anxiety’s strength (by making it into a villain) and deflate our own (by making ourselves into a victim) that we fool ourselves into believing otherwise.

I’ve recently had the privilege of connecting with dozens of people who classify themselves as an “anxiety sufferer” — just as I once did. And in every single case, even those in which the person had been dealing with anxiety for decades, I’ve given them the exact same life-changing advice: Stop focusing on the times you’ve had an anxiety attack, and you’ll realize that you don’t really “suffer” from them.

It doesn’t matter who you are and how severe you believe your anxiety to be, I can guarantee if you were to count out the number of times in your life you’ve had an anxiety attack, it wouldn’t even come close to comparing to the number of experiences you’ve had without one.

It’s an act of unintentional self-sabotage. Rather than focusing on and developing belief systems about the things we have abundantly more evidence to prove, we all consciously choose to develop them about the few experiences that hurt or are more intense.

And this goes well beyond the realm of anxiety:

We all go through challenging experiences in life. It is up to us whether we want to form our belief systems around those isolated experiences, or the much larger pool of moments that reflect a much more positive experience.

How to Squash This Thought and Become Anxiety Free

Putting an end to this unhealthy thought pattern certainly requires persistence, but I’ve developed a simple activity to get you started:

1. On a white piece of paper, start by drawing a tick mark for every single experience you’ve had in your life thus far that you would classify as an “anxiety attack.”

2. Whether you come up with only a few ticks, or you manage to fill up quite a bit of space, take a deep breath and then remind yourself that all of the remaining white space symbolizes the moments where anxiety wasn’t present.

3. With many of your bouts with anxiety now fresh in your mind, challenge yourself to come up with an antonym to anxiety (common ones include: confident, strong, peaceful, calm)

4. Now on a different part of the piece of paper, draw a tick mark for every time in your life you’ve felt that antonym.

5. Look at your completed paper. Remind yourself that to this point you’ve simply chosen to create a belief system off of the first set of tick marks, but are now choosing to instead create one based on both the blank space and the second set of tick marks, knowing that it is by far the more logical, healthy, and well-supported belief.

This exercise may seem simplistic, but its potential impact is far from that. I’ve seen it perfectly set the stage for an anxiety-free life and that’s why I made it the introductory lesson in an online course I’ve developed to give you the tools to power past your anxiety and set yourself free to do everything you set your mind to.

The course features 17 lessons, including eight tried and tested tools designed to stop anxiety attacks in their tracks. For more information on this course, do not hesitate to contact me directly or visit hackanxietytoolbox.com.