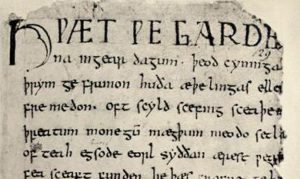 First lines of Beowulf from the damaged Nowell Codex

Old English arose from the set of varieties of West Germanic which the early settlers spoke.

The Germanic settlers, who according to the Venerable Bede arrived in England in 449, brought with them dialects of West Germanic which developed further in England into varieties which were later written down as dialects of Old English (from about 600 onwards). However, it is known that before that date there were incursions made by Germanic tribes along southern shore of England known as the Saxon Shore.

Old English arose from the set of varieties of West Germanic which the early settlers spoke. The three main groups of settlers were Angles, Saxons and Jutes. By and large, the Angles settled in the middle and north of England, the Saxon in the south and the Jutes in the area of present-day Kent. 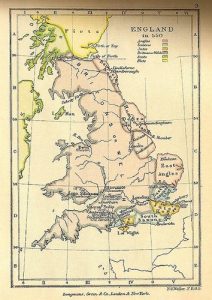 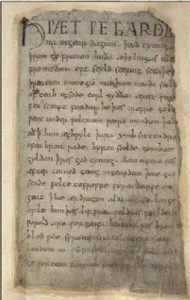 [LEFT]: Map of Britain around 550
[RIGHT]: Opening lines of the Beowulf manuscript

After the Anglo-Saxon invasion there was little awareness of England let alone of English. With the establishment of the West Saxon kingdom in later centuries and with the court which formed the pivot point of this kingdom a first inkling of the idea of English developed. With the invasion of England by the Danes (after 800) it became more clear that the Germanic tribes in England were separate from their fellows on the continent and in Scandinavia. 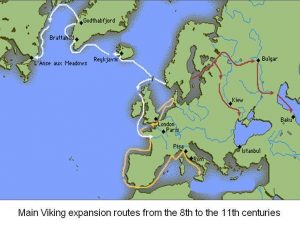 Among the different groupings in England in the Old English period different dialects (that is purely geographical variants) are recognizable: Northumbrian in the north, Anglian in the middle and West-Saxon in the south. Due to the political significance of West-Saxon in the late Old English period (after the 9th century) – it was this region which under King Alfred (c. 849-899) sucessfully resisted Viking expansion to the south – which the written form of this dialect developed into something like a standard. 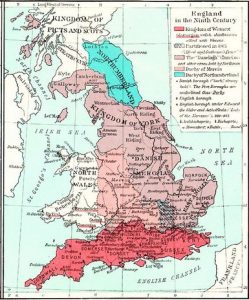 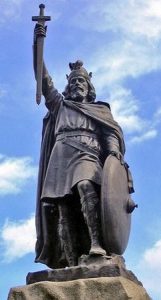 [LEFT]: Map of Britain in the 9th century
[RIGHT]: Statue of King Alfred in Winchester

At this time it was Winchester and not London which was the political centre of the country. The term used for the West Saxon ‘standard’ is koiné which derives from Greek and means a common dialect, that is a variety which was used in monastaries in parts of England outside of West Saxony for the purpose of writing.

It is common to divide England into four dialect areas for the Old English period. First of all note that by England that part of mainland Britain is meant which does not include Scotland, Wales and Cornwall. These three areas were Celtic from the time of the arrival of the Celts some number of centuries BC and remained so well into the Middle English period.

The dialect areas of England can be traced back quite clearly to the Germanic tribes which came and settled in Britain from the middle of the 5th century onwards. There were basically three tribal groups among the earlier settlers in England: the Angles, the Saxons and the Jutes. The Angles came from the area of Angeln (roughly the Schleswig-Holstein of today), the Saxons from the area of east and central Lower Saxony and the Jutes from the Jutland peninsula which forms west Denmark today. The correlation between original tribe and later English dialect is as follows:

Germanic tribes and regions in England where they mainly settled

Of these three groups the most important are the Saxons as they established themselves as the politically dominant force in the Old English period. A number of factors contributed to this not least the strong position of the West Saxon kings, chief among these being Alfred (late 9th century). The West Saxon dialect was also strongest in the scriptorias (i.e. those places where manuscripts were copied and/or written originally) so that for written communication West Saxon was the natural choice.

A variety of documents have nonetheless been handed down in the language of the remaining areas. Notably from Northumbria a number of documents are extant which offer us a fairly clear picture of this dialect area. At this point one should also note that the central and northern part of England is linguistically fairly homogeneous in the Old English period and is termed Anglia. To differentiate sections within this area one speaks of Mercia which is the central region and Northumbria which is the northern part (i.e. north of the river Humber).

A few documents are available to us in the dialect of Kent (notably a set of sermons). This offers us a brief glimpse at the characteristics of this dialect which in the Middle English period was of considerable significance. Notable in Kentish is the fact that Old English /y:/ was pronounced /e:/ thus giving us words like evil in Modern English where one would expect something like ivil.

In Irish monasteries, a form of the Latin alphabet (Uncial script) evolved which was later adapted and used in English monasteries for copying texts in Latin and later in English.

ORTHOGRAPHY There are a number of letters used in Old English which were later discontinued; of these the following are the main ones: Þ ‘thorn’ and ð ‘eth’ (later replaced by th indicating the voiced and voiceless ambidental fricatives), ʒ ‘yogh’ used for g, ‘wynn’, i.e. ‘joy’, was a form of the letter w used in early texts, æ ‘ash’ a ligature (two letters in one form) composed of a and e and representing a sound intermediate between /a/ and /e/.

PHONOLOGY The writing system of Old English is by and large phonological, i.e. every letter represents a phoneme. This applies above all to fricatives though diphthongs, the affricate /dʒ/ and the fricative /ʃ/ used more than one letter.

ALLOPHONY OF /g/ Before back vowels [g] is found, [ɣ] between back vowels and [j] before and between high vowels. There were two affricates /tʃ/ and /dʒ/, the first deriving from palatalisation in early Old English and the second inherited from pre-Old English.

The fricatives /f, θ, s/ had two main allophones, a voiceless one at the beginning or end of a word or in the environment of a voiceless segment and a voiced one when found intervocalically. This alternation can be seen to this day and is responsible for present-day alternations like wife : wives.

Old English had both long vowels and long consonants. This was an inherited feature of Germanic and has only been maintained in the present-day Scandinavian languages (bar Danish). Examples of long consonants are cyssan ‘kiss’, settan ‘set’, siþþan ‘since’.

Clusters existed in Old English which are not permissible today. These were simplified in the Middle English period chiefly by the reduction of clusters of /h/ or /w/ and a following sonorant: hlāf ‘loaf’, wrītan ‘write’. The other major phonotactic change is the simplification of onsets consisting of a velar stop followed by an alveolar nasal (permissible in German) gnagan ‘gnaw’, cnēo ‘knee’. In nearly all these cases present-day orthography indicates the former phonetic realisation.

Note the distinction between two types of low vowels, front and back. Moreover, there are four diphthongs in later Old English ea, æa [æa, æ:a] and eo, ēo [eə, e:ə] which were sensitive to the consonants which followed them. Examples for the contrast in length are listed in the columns below.

This rested on the lexical root of a word. At this stage the language had long since developed the type of stress accent — stressed syllables are longer and louder than unstressed ones — which is still typical of English and other Germanic languages. Prefixes with nouns could also take stress as in ˡandswaru (answer) but verbs always have root stress as in forˡgiefan (forgive).

With the influx of Romance words in the Middle English period alternative stress pattern arise. By and large a system begins to emerge in late Middle English for foreign words which demands stress on the first heavy syllable starting from the penultimate syllable of a word and moving leftwards, i.e. towards the beginning of the word. This system — although it shows many exceptions in Modern English — would appear to have replaced the Germanic pattern because it resulted in the right stress pattern when applied to inherited native words as well.

Originally published by Raymond Hickey at Studying the History of English, Universität Duisburg-Essen, as an open-access educational resource.