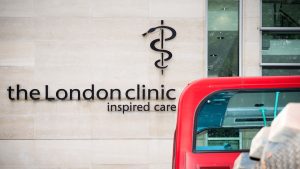 What have snakes, unicorns and crocodiles got to do with pharmacies? Modern pharmaceutical signs have a long history going back to the Greek gods.

While alchemists used secret symbols to disguise their chemical formulations, pharmacists used the tools of their trade – medical ingredients, pestle and mortar, and carboys (pharmaceutical vessels) – to advertise on shop signs and in trade publications. And though their origins may be forgotten, many of the visual markers are still used in drug packaging, in pharmacies and on medical buildings. 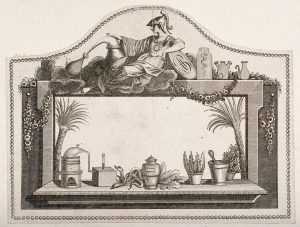 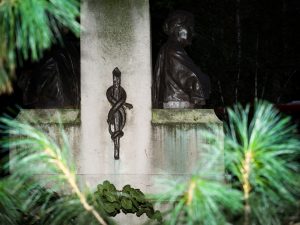 Slithering their way through the iconography of pharmaceutical history, snakes appear, often wrapped around a staff, wherever you find apothecaries. Asclepius, the Greek god of medicine, carried a rod with a single snake, which became a medical symbol from the fifth century BCE.

The messenger of the gods, Hermes (the Roman god Mercury), acquired an extra snake on his staff, known as a caduceus. It’s perhaps not a coincidence, then, that the element mercury was a major chemical agent in the history of medicine and alchemy. For example, the evaporated vapour of mercury combined with snake venom was injected through the centre of the scalp as an antidote to snake bite and epilepsy. Both Hermes, the god of commerce, and Mercury, the god of trade, are a good fit for retail pharmacy.

The symmetrical proportions of the caduceus lend themselves to design. It was first used as a printer’s mark (colophon) by a 15th-century book publisher, and its association with medicine was revived in the early 19th century when a medical publisher adopted it. In France, snakes might also be found entwined around palm trees on 19th-century pharmaceutical labels. Perhaps this is a reminder of the exotic origins of many drugs? 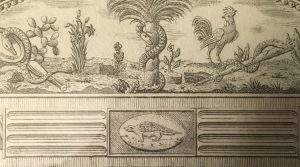 Possibly a French pharmaceutical label with a snake wrapped around a palm tree, and what may be a crocodile underneath / Wellcome Collection, Creative Commons

The Bowl of Hygeia is another mythological symbol associated with medicine. As the daughter and assistant of Asclepius, Hygeia tended to her father’s temples with a bowl of medicinal potion from which the serpent of wisdom drank, according to ancient Greek mythology. 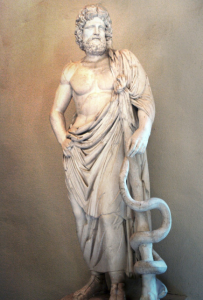 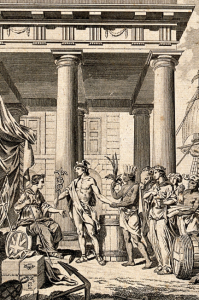 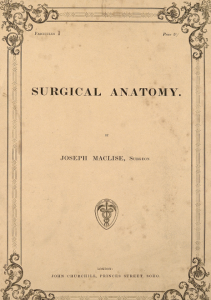 Title page of ‘Surgical Anatomy’ by Joseph Maclise, 1851. Hermes’s caduceus – a winged staff entwined by two snakes – is transformed into a printer’s mark, with the Latin inscription: “It holds with an unbroken union: medicine [and] literature.” The left snake represents medicine and the right one represents literature. / Wellcome Collection, Creative Commons

This hospital label from around 1758 features both the staff of Asclepius (right) and Hermes’s caduceus (left). / Wellcome Collection, Creative Commons 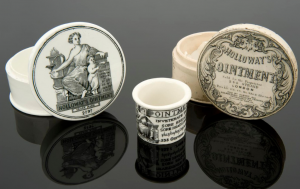 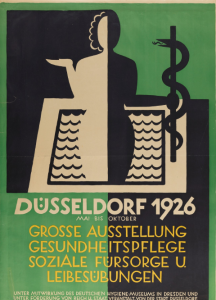 Possibly a more modern interpretation of Hygeia for a health exhibition in Düsseldorf in 1926. The female figure holds the staff of Asclepius in one hand. / Wellcome Collection, Creative Commons 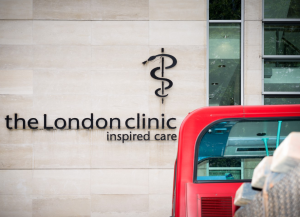 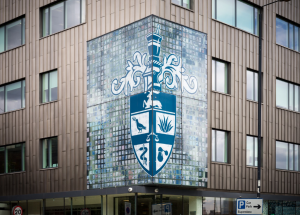 The coat of arms on the Royal Pharmaceutical Society building features Asclepius’s staff, along with other historical references / Photo by Ben Gilbert, Wellcome Collection, Creative Commons 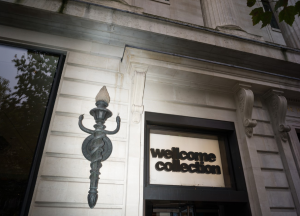 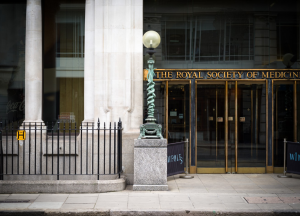 The lamps outside the Royal College of Medicine in London are entwined with two snakes to suggest a caduceus / Photo by Ben Gilbert, Wellcome Collection, Creative Commons

Another animal symbol commonly seen in pharmaceutical branding is the unicorn. It was first mentioned by the ancient Greeks as a symbol of purity and grace, whose spiralling horn had the power to heal, especially as an antidote to poisons. Often narwhal horns would wash up on beaches and be mistaken for the mystical unicorn’s horn and, like other animal horns and bones, be ground up for medical use. Along with the lion, the unicorn is the symbol of the British monarchy, and it was King James I who granted the Society of Apothecaries their charter in 1617 and their coat of arms with the two unicorns. 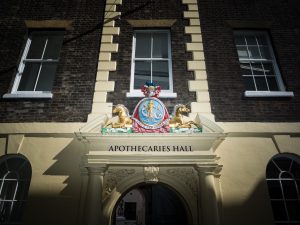 The coat of arms of the Society of Apothecaries above Apothecaries Hall in London / Photo by Ben Gilbert, Wellcome Collection, Creative Commons

The unicorn was also the logo for Burroughs Wellcome & Co. and then the Wellcome Foundation from 1908 to 1995. It’s likely that Henry Wellcome was influenced in his choice of trademark by the myth of the unicorn’s horn. According to historians Roy Church and E M Tansey, Wellcome gave clear instructions to the designers that he wanted “delicacy, and refinement, and grace with virility and verve” in his unicorn. 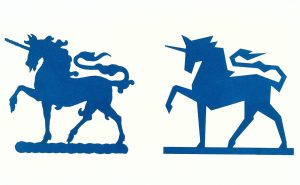 The unicorn trademark for Burroughs Wellcome and the Wellcome Foundation. The original version is on the left; it was later given a modern makeover / Wellcome Collection, Creative Commons 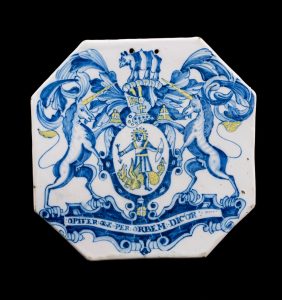 A 17th-century pill tile, used for preparing pills. The coat of arms suggests that the original owner was a member of the Society of Apothecaries. The coat of arms features the god of healing, Apollo, killing a wyvern, with a unicorn on either side and a rhinoceros above the central scene. / Wellcome Collection, Creative Commons

The crocodile or alligator was associated with alchemy, and then with apothecary and chemist shops, though the reason for this association is unclear. It may simply have been a way of showing that the chemist had access to the rarest and most exotic ingredients, or, as nature writer Hannah Velten suggests, it may have been the reptiles’ similarity to another mythical creature, the wyvern, a sort of dragon. In the coat of arms of the Society of Apothecaries, the god Apollo stands over a two-legged wyvern, which represents disease. 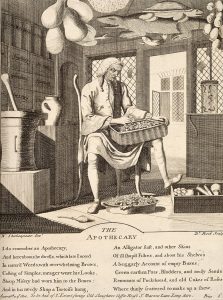 In Romeo and Juliet, Shakespeare describes an apothecary in which hangs “An alligator stuff’d, and other skins of ill-shaped fishes”. / Wellcome Collection, Creative Commons

Nowadays pharmacies display the green cross outside their shops. The green cross was first introduced as a pharmaceutical sign in continental Europe in the early 20th century as a replacement for the red cross, which was adopted by the International Red Cross in 1863. The green cross was not used in Britain until 1984, when the Royal Pharmaceutical Society of Great Britain chose it as the standard symbol for pharmacy. The society stipulated that it should be produced in a specified shade of green, or in black and white, and that the word ‘pharmacy’ or ‘pharmacist’ should appear with it. 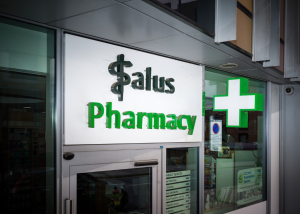 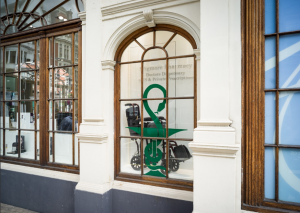 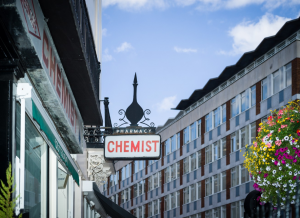 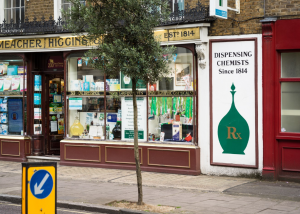 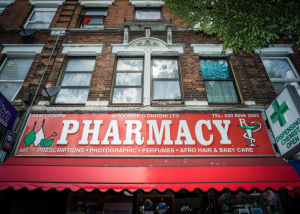 The Woodside Pharmacy sign includes several traditional and modern pharmaceutical signs, including a snake, a pestle and mortar and the green cross / Photo by Ben Gilbert, Wellcome Collection, Creative Commons

Another graphic symbol closely related to pharmacy is Rx. It derives from the Latin verb recipere, meaning ‘to take back’ or ‘to receive’, and first appeared on doctors’ notes to chemists. In America, pharmaceutical products still bear the symbol to mark the authority of prescriptions. Modern pharmaceutical symbols may be much more mundane than their predecessors, but they are still essential as marks of authority and reliability.