Almanacs have a long association with medicine. Potted health advice lent itself to inclusion in the sort of cheap booklets for a mass market that proliferated under the name ‘Almanack’ from the 16th century onwards. But what exactly is an almanac? The origins of the term are obscure, and in an age when it is appended to publications as diverse as ‘Whitaker’s Almanack’ and ‘Wisden Cricketers’ Almanack’ – both preferring to retain the old spelling of the word, with its suggestion of arcane knowledge – one could be forgiven for being a little confused.

In essence an almanac is a register of the coming year. Its most important component is therefore an annual calendar, showing the days and months of the year and when the important Christian festivals will fall. Around this core other elements gradually accreted until at the present day we have almanacs like those mentioned above which are almost entirely retrospective in their focus.

The great age of English almanacs was the period 1550–1700, explored by Louise Curth in her seminal work on the subject. It was at this time that almanacs acquired their characteristic booklet format and most elements of the standard suite of non-calendrical components – prognostications (foretelling events of the coming year), medical advice (often accompanied by a zodiac man), tide tables, meteorological guidance, details of legal terms, lists of fairs, weights and measures, and so on. 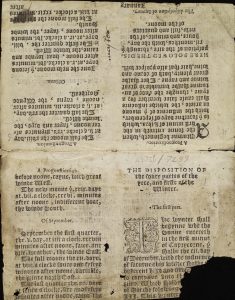 As with most printed genres, almanacs were produced on the Continent long before they emerged in England, and it is clear that the various English authors of almanacs of the 16th and 17th centuries were following Continental models. There was however a manuscript tradition of almanacs in England in the late medieval period that is attested by more than one example in the Wellcome Library. Historians of medieval medicine are familiar with physicians’ calendars, sometimes in the form of folding booklets, apparently designed to hang from the waist. These are a species of almanac, but they contain little extraneous non medically-related content and were no doubt intended for use by medical practitioners.

The antecedents of the characteristic English printed almanac of the early modern period are however more clearly seen in the so-called ‘Physician’s Handbook’ (MS. 8004), with its addition of much non-medical content, including verse and a pilgrimage guide, and more particularly in MS. 41. The latter is a mid-15th century compilation that combines a calendar, medical advice, astronomical tables and astrological guidance, financial information, data on weights and measures, instructions for surveying land, and lists of English castles and bishoprics.  If it is unlikely that the ‘Physician’s Handbook’ was written by or for a practising physician in view of its contents, it is inconceivable that MS. 41 was: the manuscript bears all the hallmarks of a handy guide for practical business and living – in other words an almanac.

There is though one aspect of MS. 41 that differs markedly from the typical early modern printed almanac: it is multilingual. The calendar and astronomical tables are in Latin, as are the lists of castles and bishoprics, the surveying instructions and the financial information; the data on weights and measures is in French; the medical advice and astrological guidance are in English. Clearly then this was not a compilation intended for everyman; its contents would have been accessible to relatively few 15th century English people. Perhaps it was owned by a churchman, maybe an abbot or bishop used to moving round the country, attending church councils and visiting estates. 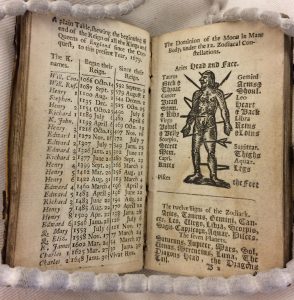 One ubiquitous feature of later English printed almanacs is conspicuous by its absence from MS. 41 – zodiac man. Indeed a crude woodcut of a zodiac man was often the only illustration included in the cheap prints. Zodiac man – a human figure decorated with pictures of the 12 constellations governing various parts of the body – served little practical purpose for either practitioner or patient, even though the figure is often found in later medieval medical books.

Rather than including a stylised astrological figure the compiler of MS. 41 has added two realistic line drawings, one of money changers or merchants, the other of bishops in conclave – which again suggest a commission for an unusual owner. Astral medicine was undoubtedly very much part of this owner’s world, but the contents of the volume speak of a range of interests rooted in the hard-headed everyday world of business and politics.