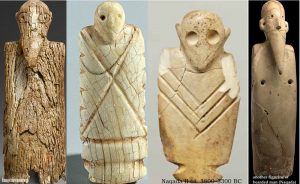 The rise of the city as an important institution can perhaps more confidently be identified as an aspect of ancient Egyptian civilization. 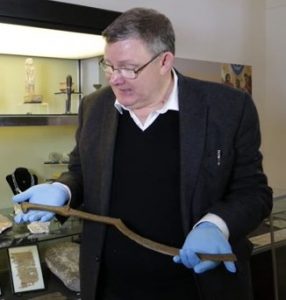 Like the term ‘city’, ‘urbanism’ and ‘urbanization’ are not words that are easy to define in very strict terms. The classic definition of urbanization was proposed in 1942 by American demographer Hope Tisdale as

‘… a process of population concentration. It proceeds in two ways: the multiplication of points of concentration and the increase in size of individual concentrations.’

In 1965 the American sociologist Philip Hauser added to this definition the concept that as a result of this process the ‘proportion of the population living in urban places increases’, to avoid the definition covering a situation where the non-urban population grows even faster than the urban population – not what most people think of as the process of urbanization. For ancient Egypt the question of what proportion of the population were city- or town-dwellers at any given period of history is not easy to answer. However, the rise of the city as an important institution can perhaps more confidently be identified as an aspect of ancient Egyptian civilization.

The first cities in Egypt came out of a background of increasing state formation in the Late Predynastic Period (3500–3000 BC). The best examples of this are in Upper (southern) Egypt and these are also the best-known cities from the period (although Lower (northern) Egypt also had important centres of population before unification). Archaeologically, the settlements at Nagada and Hierakonpolis are the best preserved from this period and other aspects of the archaeology of these sites – the increasingly rank-differentiated cemeteries containing specialist products of an elite, economically vibrant, politically centralized culture – provide rich evidence for the development of urbanism, state formation and ancient Egyptian ‘civilization’ in this relatively limited part of the Nile Valley. It must also be noted that it was this region that was the successful competitor for the control of the whole of Egypt around 3000 BC and, presumably, its vision of urbanism and what constituted a suitable basis for a centralized, agrarian state was what informed the creation of the new capital at Memphis at this time.

Nagada (often spelled Naqada), located 30 km (18½ miles) north of Thebes, was clearly one of the most important regional centres of the predynastic period. Its rich cemeteries provided the data that allowed Flinders Petrie in the final years of the 19th century to undertake the first systematic study of the material culture of the predynastic, allowing him to identify a series of distinct phases, which he named after the site: Nagada I–III. Settlement at Nagada in the Nagada II phase was identified by Petrie in two distinct areas, named by him the ‘North Town’ and the ‘South Town’. The exact nature of these areas – whether they were used for domestic occupation, industrial/agricultural production or the dumping of rubbish – is still not agreed, although the South Town did produce a series of rectangular mudbrick structures that have been identified as houses.

The most important early ‘urban’ site in Egypt is undoubtedly the ancient Nekhen, modern Kom el-Ahmar (‘Red Mound’), best known by its Classical name Hierakonpolis, located 80 km (50 miles) south of Thebes on the west bank of the Nile. The Predynastic and Early Dynastic city was spread out over an area running 2.5 km (1½ miles) from north to south along the Nile and, more remarkably, over 3 km (almost 2 miles) from east to west. Within this extensive zone, different clusters of structures developed with their own individual character.

The site was first excavated in a systematic way by the British archaeologists James Quibell and Frederick Green in 1897–99. They were lucky enough to discover a major early temple, which is most famous for the ‘Main Deposit’, an extraordinary cache of votive material that contained the most important objects for the unification period found anywhere in Egypt. The most famous of these objects are the Narmer Palette and the Narmer and ‘Scorpion’ maceheads. These over-sized ceremonial objects are covered with relief decoration of two individuals – to whom we refer as Narmer and ‘Scorpion’ – depicted wearing regalia and behaving in ways (smiting enemies, initiating major communal projects) that in later periods were used as motifs designating royal activity. Therefore these objects support the view that Hierakonpolis was not only a major settlement site of Upper Egypt at the time of the unification, but that it was also a political centre – perhaps the capital of a southern kingdom – which produced the leaders who would become kings of a unified Egypt around 3050 BC. 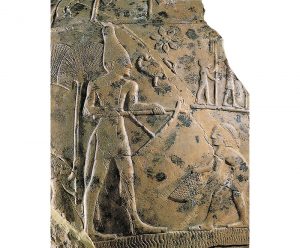 In an early example of royal sponsorship of agricultural projects, King ‘Scorpion’ wields a hoe on this important ceremonial object from Hierakonpolis, the ‘Scorpion’ Macehead. Ashmolean Museum, University of Oxford.

Excavations at Hierakonpolis from 1967 onwards by the American archaeologists Walter Fairservis, Michael Hoffman and Renée Friedman have done much to clarify the extent of early urbanism at Hierakonpolis. The main centre of the city is now referred to as HK 29. It has monumental elements, including a large temple and palace, that would be familiar in general terms, if not in architectural detail, to an Egyptian of the dynastic period. Other parts of the city, located away from HK 29, were specialist centres for industrial production, including kilns for the production of distinctive black-topped pottery and a large brewery. The most visibly impressive monument at Hierakonpolis today is the ‘Fort’, a huge rectangular enclosure built by King Khasekhemwy of the 2nd Dynasty, sometimes described as the oldest standing mudbrick building in the world, which despite its name is of unknown function. 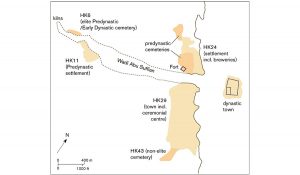 Plan of Hierakonpolis (ancient Nekhen). The extent of the Predynastic and Early Dynastic town (HK 11, 24 and 29) is markedly larger than the later dynastic settlement in the Nile floodplain (middle right). Steven Snape. 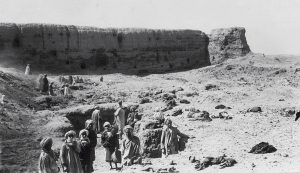 The 2nd Dynasty ‘Fort’ at Hierakonpolis was partly built over a Predynastic cemetery, excavated by John Garstang in 1905–6. Garstang Museum of Archaeology, Liverpool University.

The establishment of Memphis as a national capital at the time of the unification of Egypt brought an end to Hierakonpolis’ role as a major royal power-base and, despite some evidence of royal interest in the cult of Horus at the site, the Old Kingdom and later was a time of decline for this important early city.

Given the concentration of well-preserved archaeological sites, and especially settlement sites, in Upper Egypt, it is something of a surprise to note that the earliest site in the whole of Egypt that can be properly recognized as a town is the Western Delta site of Merimde Beni Salama, excavated by German archaeologist Hermann Junker from 1929 to 1938. This Neolithic town, which was abandoned by 4000 BC, was well placed to take advantage of the contemporary climatic conditions, with the savannah plains that predated the Sahara Desert we know today to the west and the Nilotic Delta to the east. The houses of the latter phase of occupation are substantial, partly subterranean, mud huts, some with door thresholds made from hippopotamus tibia – a resource presumably available from the Delta marshes. Human burials between the houses indicate one way in which Merimde was distinctly different from the usual urban pattern, where settlement and cemetery in Upper (southern) Egypt were separated.

Indeed the heavy dependence Egyptian archaeology has traditionally had on cemeteries as a source of evidence is especially true for the millennia before the unification of Egypt. With a few exceptions – Hierakonpolis the most notable – the predynastic period in Upper Egypt is mainly known from the relatively rich and culturally distinctive burials of the Nagada I–III phases, especially their distinctive ceramic tradition. By contrast, Predynastic burials of Lower (northern) Egypt, which are in any case much less well-preserved than the desert-edge cemeteries of Upper Egypt, have provided a much more dour set of grave goods, which are culturally distinct from those of the southern sites. Much of this northern material comes from a series of cemetery sites around Cairo: Wadi Digla, Heliopolis and, especially, Maadi. The last site, together with the northwestern Delta site of Buto, gave its name to a cultural phase (the Maadi-Buto culture), which was contemporary with Nagada I–II in Upper Egypt. Importantly, as well as burial evidence, there was also a settlement site at Maadi, which was explored between 1930 and 1948. It sits on a natural terrace overlooking the valley below and consists mainly of a narrow strip of simple huts and storage pits. 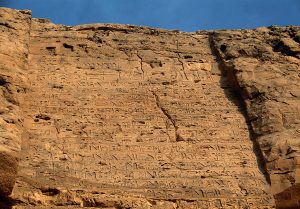 The text of the rock-cut boundary stelae of Akhenaten at Amarna provides one of the clearest statements of royal intentions for the foundation of a city. Kenneth Garrett/National Geographic Creative.

More recent attention in the search for Predynastic settlement in Lower Egypt has concentrated on a number of sites located on geziras (naturally occurring sand-islands) in the Eastern Nile Delta, where work at Tell Ibrahim Awad, Tell el-Issuwid and Tell el-Farkha has produced sites that are essentially similar to existing Maadi-Buto sites with an emphasis on simple huts (as attested by post-holes) and a significant number of storage pits for agricultural products. A renewed interest recently in the archaeology of Buto has produced evidence for long-distance contacts with the Uruk culture of Mesopotamia; as is also the case at Hierakonpolis, evidence of long-distance contacts has stimulated discussion, although little agreement, on how contact with traders from the early cities of Mesopotamia might have influenced urban development in Egypt itself. Certainly, rapid expansion of many of these settlements at and after the unification, and the extensive use of more substantial mudbrick structures, is striking and may be a development inspired by news of Mesopotamian urban sites from traders.