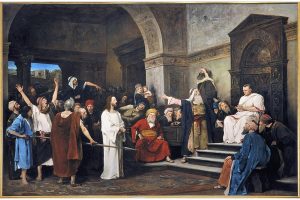 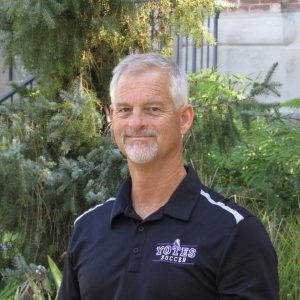 Pontius Pilate, and the infamous trial he presided over, have become the stuff not only of legend, but of historical reconstructions and speculations ranging from the ingenious to the absurd, but for the most part, they have been confused. Was Pilate an angry thug, agent of an oppressive empire, just waiting for the opportunity to crucify anyone who might dare to challenge Rome’s authority? Or was he a victim of circumstances, haplessly manipulated by Jews who demanded the blood of a blasphemer? Both of these unfortunately common interpretations are demonstrably false. On a superficial reading, our Jewish sources, Philo and Josephus, seem to treat Pilate as an irritable agent provocateur, characterized by arrogance, violence, stubbornness and cruelty, while the New Testament portrays a kinder, gentler Pilate. Both of these readings are misleading, failing to do justice to the more complex portrayal of Pilate’s actions and probable motives in those same sources. 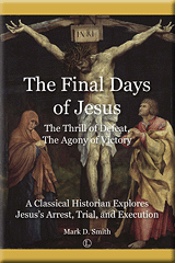 The abstract, negative language Philo and Josephus utilize to refer to Pilate is an example of the stereotypical bombast they use to characterize anyone they don’t like (and for both, this bombast serves larger thematic purposes). When they describe the actionsof Pilate as prefect, however, a very different picture emerges.

Beyond the trial of Jesus, Philo and Josephus provide accounts of four other controversies which Pilate presided over. In the first, the Affair of the Standards (26 AD), Pilate moved one of his military cohorts to the fortress adjacent to the Temple in Jerusalem. The standards of this cohort included the image of the emperor, a violation of the Jewish prohibition of graven images. Many Jews, upon discovering this profanation, marched off to the provincial capital to form an “Occupy Caesarea” movement, seeking the removal of those standards. When Pilate’s patience wore thin after five days, he surrounded the crowd with guards, ordered them to draw their swords, and threatened death to any who persisted in their protest. One by one, Jewish men lay down and bared their throats, calling Pilate’s bluff. Pilate’s response is instructive: he relented and removed the offending cohort, thus choosing to uphold the pax Romana and demonstrating an unwillingness to inaugurate his administration in blood.

Perhaps a year later, Pilate faced another protest in Jerusalem over his use of Temple funds to finance the building of an aqueduct. In this case, when the crowd became increasingly virulent and violent, Pilate gave the order for his troops to surround the protesters, but he also instructed that they use clubs, not swords, for crowd control. This act was not kind or gentle, but it does demonstrate significant restraint under the circumstances. In this case, Pilate was not able to keep the peace when a riot erupted. Even his restraint did not prevent some Jewish deaths from some combination of Roman clubs and trampling.

The Affair of the Shields probably happened in 31 or 32, about a year before the trial of Jesus. In this case, Pilate commissioned some golden shields in honor of his benefactor, Tiberius, hanging them inside the courtyard of his palace in Jerusalem. Pilate had learned from experience: he did not include a graven image of the emperor, but he did include an honorary inscription, probably utilizing the standard imperial language of “son of god” for Tiberius. In response, a number of Jews took offense and sent some Herodian princes to request the shields’ removal. When Pilate refused, probably because he feared offending Tiberius at a very delicate time in Rome, the Herodians sent off a letter of protest, to which Tiberius responded with frustration, ordering Pilate to move the shields to the imperial temple in Caesarea.

The final case ended the prefecture of Pilate. He heard of a group of Samaritans gathering in Mt. Gerizim. Fearing a potential insurrection, he ordered his soldiers break up the group, and upon further examination, executed the ring-leaders. Samaritans in turn complained to the senior governor of Syria, who sent Pilate off to Rome to answer charges before the emperor. By the time Pilate arrived, Tiberius was dead, and Pilate disappears from history.

The Pilate portrayed by Philo and Josephus is anything but the angry, cruel, violent tyrant their stereotypical language might suggest. He is ignorant, foolish, short-sighted, arrogant, stubborn, and not terribly competent. He is neither kind nor gentle, not at all reluctant to execute subjects who pose potential threats. On the whole, however, he knows that his primary job is to keep the peace, and acts accordingly.

The Pilate who emerges from the pages of the New Testament, in particular, the Gospel of Mark (probably the oldest), is consistent with the portrayal of Philo and Josephus, minus the stereotypical epithets. Roman provincial governance was, at its heart, personal and elitist. Governors ruled their provinces in collaboration with personally appointed local elites. In the case of Roman Judaea, the local elite collaborators were the high priest, personally appointed by the governor, and his extended family, all from the house of Annas.

The trial of Jesus followed the standard procedures of Roman provincial trials (cognitio extra ordinem). The high-priestly family requested the trial and presented the charges: Jesus claimed to be “King of the Jews.” When Pilate turned to Jesus to present a defense, his reply did not contest the charges. At that point, the trial was essentially over. Jesus was guilty, but guilty of what? And what is the appropriate penalty for a “King of the Jews” who showed no penchant for violence or rebellion? The remaining acts of Pilate are not protestations of Jesus’s innocence, but posturing, determining penalty, and wrestling with elite collaborators over who would be responsible for any uprising that might follow. Pilate was neither kind nor gentle. In the end, he ordered Jesus’s crucifixion and his soldiers carried it out.

In sum, the Pilate who emerges from a nuanced consideration of the evidence is more an oaf than an ogre.