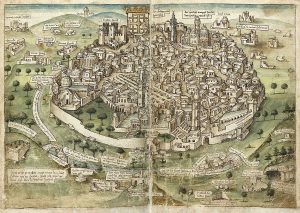 The Kingdom of Israel was created after the capture of the city of Jerusalem by the Crusaders in 1099.

Creation of the Kingdom

The Kingdom was created after the capture of the city of Jerusalem by the Crusaders in 1099. One of the leaders Gottfried Bouillon was elected the first king. He refused to accept this title, not wanting to wear a royal crown because the Savior wore thorns, instead, he took the title of Defender of the Holy Sepulcher. Unfortunately he died the following year and his brother Baldwin I who was not so pious took the title of “King of Jerusalem.”

Baldwin successfully expanded the kingdom, seizing the port cities of Aqrah , Sidon and Beirut, and also establishing his dominion over the Crusader states in the North – the county of Edessa, the principality of Antioch and the county of Tripoli.  Italian city-states like Venice, Pisa and Genoa, began to play an important role in the kingdom. Their fleet participated in the seizure of ports, where they received their quarters for trade. Around 1080 in Jerusalem, the Order of the Hospitallers founded a hospital for pilgrims and another monk order, the Templars , settled in a temple converted from the Al-Aqsa Mosque. 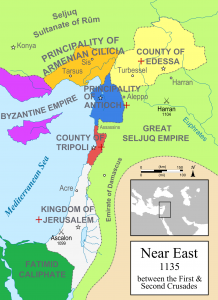 A political map of the Near East in 1135 CE. Crusader states are marked with a red cross. / Image by MapMaster, Wikimedia Commons

Baldwin died in 1118, leaving no heirs. His successor was his cousin Baldwin de Burg, Earl of Edessa. Baldwin II was also a capable ruler.

A new generation, born and raised in the Levant, considered the Holy Land to be its homeland and had a negative attitude towards the newly arrived crusaders.

The device was largely based on the feudal orders of the then Western Europe , but with many important differences. The Kingdom was located on a small territory, there were not enough land suitable for agriculture. The feudal lords, who owned the lands, nevertheless preferred to live in Jerusalem and other cities. As in Europe, the barons had vassals, while being vassals of the king.Agriculture was based on the Muslim version of the feudal system – iqta and this order was not changed.

The Italian merchants led to the development of an economy that was more commercial than agricultural. Palestine has always been the intersection of trade routes; now trade has spread to Europe. European goods – for example, textiles from Northern Europe – appeared in the Middle East and Asia, while Asian goods were sent to Europe. Italian city-states received huge profits, which influenced their flourishing in the following centuries.

Since the noble lords lived more in Jerusalem than in the provinces, they had much more influence over the king than it did in Europe. The noble barons constituted the Supreme Council.The council consisted of bishops and influential barons, and was responsible for the election of the king, the provision of money to the king, and the convening of troops.

The shortage of troops was largely reimbursed by the creation of spiritual and knightly orders.The orders of the Templars and Hospitallers were created in the early years of the kingdom and often replaced the barons in the province. The orders were directly under the papal administration, and not royal; they were largely independent and did not have to bear military service, however, in fact, participated in all major battles.

Baldwin II was succeeded by his daughter Melisenda of Jerusalem, who ruled with her husband Fulk Anjou. During their reign, the greatest cultural and economic development was achieved. Fulk, the famous military commander, faced a new dangerous enemy – Atabek Mosul Zangi.When Fulk died hunting in 1143. Zangi took advantage of this and captured the county of Edessa in 1146 . Queen Melisande, who became regent with her son Baldwin III. In 1147 , members of the Second Crusade arrived in the kingdom.

Having met in Tripoli , the leaders of the Crusaders, the King of France, Louis VII the Young and the King of Germany, Conrad III Staufen , decided to attack the friendly Emir of Damascus as the most vulnerable enemy. The crusade ended in 1148, a complete failure. Melisande ruled the country as a regent until Baldwin III overthrew her government in 1153. Baldwin III took Askalon from the Fatimids , the last Egyptian fortress on the Palestinian coast. At the same time, the general situation of the crusading states deteriorated, as Nur ad-Din seized Damascus and united Muslim Syria under his authority.

Baldwin III died in 1162 , a year after his mother, he was succeeded by his brother, Amory . His reign was accompanied by confrontation with Nur-Ad-Din and insidious attempts to prevent the capture of Egypt by Saladin . Although with the support of the Byzantine emperor , Manuel Comnenus, Amory failed a military campaign against Egypt. Amory and Nur-Ad-Din died in 1174.

Amory I was succeeded by his young son, Baldwin IV . From an early age, he learned that he had leprosy, but that did not stop him from proving that he was an active and strong ruler and a good military leader. His illness and early death brought new feuds and destroyed the kingdom.Baldwin IV died in the spring of 1185, the title of king passed to his nephew, young Baldwin V who died in the summer of 1186.

The Loss of Jerusalem

The fall of Jerusalem that followed in 1187 essentially completed the first Kingdom of Jerusalem.The seizure of the city shocked Europe and led to the Third Crusade, which began in 1189. They were led by Richard I the Lionheart and Philippe Augustus. The army of the Crusaders twice approached Jerusalem, but never dared attack the city.

Map of routes during the First Crusade / Creative Commons

In 1192, Richard the Lionheart spoke as a mediator in the negotiations, after which Margrave Conrad of Montferrat became King of Jerusalem and Guy de Lusignan was granted Cyprus. When King Frederick II of Staufen became King of Jerusalem in 1225, he managed to temporarily return Jerusalem to Christians, taking advantage of the contradictions between the Muslim rulers. The capture of Jerusalem in 1244 by the Khwarizmians, called by the Ayyubid sultan of Egypt, marked the end of Christian dominion over this ancient city. Although at that time the king of Jerusalem was Konrad II Hohenstaufen, the actual power in the kingdom passed into the hands of the kings of Cyprus from the Lusignan dynasty.

Originally published by About History under a Creative Commons Attribution-ShareAlike 3.0 Unported license.