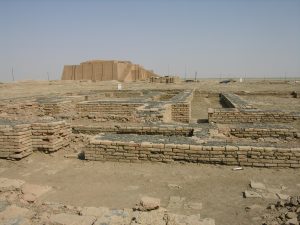 Ruins in the Town of Ur, Southern Iraq / Photo by M.Lubinski, Flickr, Creative Commons

Ur was an established city by 3800 BCE continually inhabited until 450 BCE.

Ur was a city in the region of Sumer, southern Mesopotamia, in what is modern-day Iraq. According to biblical tradition, the city is named after the man who founded the first settlement there, Ur, though this has been disputed. The city’s other biblical link is to the patriarch Abraham who left Ur to settle in the land of Canaan. This claim has also been contested by scholars who believe that Abraham’s home was further north in Mesopotamia in a place called Ura, near the city of Harran, and that the writers of the biblical narrative in the Book of Genesis confused the two. Whatever its biblical connections may have been, Ur was a significant port city on the Persian Gulf which began, most likely, as a small village in the Ubaid Period of Mesopotamian history (5000-4100 BCE) and was an established city by 3800 BCE continually inhabited until 450 BCE.

The Early Period and Excavation

The site became famous in 1922 CE when Sir Leonard Wooley excavated the ruins and discovered what he called The Great Death Pit (an elaborate grave complex), the Royal Tombs, and, more significantly to him, claimed to have found evidence of the Flood described in the Book of Genesis (this claim was later discredited but continues to find supporters). In its time, Ur was a city of enormous size, scope, and opulence which drew its vast wealth from its position on the Persian Gulf and the trade this allowed with countries as far away as India. The present site of the ruins of Ur are much further inland than they were at the time when the city flourished owing to silting of the Tigris and Euphrates rivers.

‘From the beginning, Ur was an important trade center owing to its location at a pivotal point where the Tigris and Euphrates run into the Persian Gulf. Archaeological excavations have substantiated that, early on, Ur possessed great wealth and the citizens enjoyed a level of comfort unknown in other Mesopotamian cities. As with other great urban complexes in the region, the city began as a small village which was most likely led by a priest or priest-king. The king of the First Dynasty, Mesannepadda, is only known through the Sumerian King List and from inscriptions on artifacts found in the graves of Ur. The Second Dynasty is known to have had four kings but about them, their accomplishments, or the history during this time, nothing is known. The early Mesopotamian writers did not consider it worthwhile to record the deeds of mortals and preferred to link human achievements to the work and will of the gods. Ancient hero-kings such as Gilgamesh or those who performed amazing feats such as Etana were worthy of record but mortal kings were not afforded that same level of concern.

This changed with the rise of Sargon of Akkad and his Akkadian Empire which ruled over the diverse regions of Mesopotamia between 2334-2218 BCE. Sargon the Great claimed to have been born of a priestess and a god, floated down the river in a basket of bulrushes to be found by the servant of the king of the city of Lagash, and rose from obscurity – through the will of the goddess Inanna – to rule all of Mesopotamia. The inscriptions he left dare those who follow him to do the deeds he did if they hope to call themselves a king and his life was worthy of the efforts of the scribes of the region for centuries after his death.  His grandson, Naram-Sin, learning well the lessons of the importance of personal propaganda, claimed he had gone further than his grandfather and had himself deified during his reign. In doing so, he provided a model for those kings who would follow him. Sargon the Great and Naram-Sin were the most powerful rulers of the Akkadian Empire and, once it fell, their names became legend and their deeds worth emulating.

At Ur, the heroes of Akkad were most closely emulated by the rulers of the Third Dynasty. This period in the history of Sumer is known as the Ur III Period (2047-1750 BCE) and was the age in which the city of Ur reached its height. The great ziggurat of Ur, which can still be visited in modern times, dates from this period as do most of the ruins of the city and the cuneiform tablets discovered there. The two greatest kings of the Third Dynasty were Ur-Nammu and his son Shulgi who created an urban community devoted to cultural progress and excellence and, in doing so, gave birth to what is known as the Sumerian Renaissance.

Ur-Nammu and Shulgi: The Sumerian Renaissance 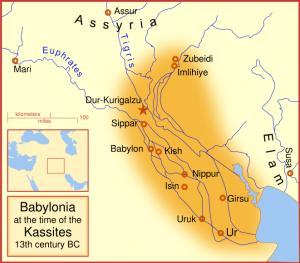 A map of the Babylonian Empire during the time of the Kassites, roughly the 13th century BC. This map shows the probable river courses and coastline at that time. / Image by MapMaster, Creative Commons

Ur-Nammu wrote down the first codified law system of the land, some three hundred years before Hammurabi of Babylon would write his, and governed his realm in accordance with a patriarchal hierarchy in which he was the father guiding his children to prosperity and continued health. Under Ur-Nammu the great ziggurat was built and trade flourished. The arts and technology for which the Sumerians are most famous were all encouraged in Ur during this time. The historian Paul Kriwaczek observes that, in order for such a patriarchal system of government to succeed, the people must believe that their ruler is greater, more powerful, than they are in the same way that children regard their father. To this end, it seems, Ur-Nammu presented himself to his subjects in line with the hero-kings Sargon and Naram-Sin in order to encourage the populace to follow him in the pursuit of excellence.

His son Shulgi, in an effort to surpass the achievements of his father, went even further. One example of this is his famous run when, to impress his people and distinguish himself from his father, Shulgi ran 100 miles (160.9 kilometres) between the religious centre of Nippur and the capital city of Ur and back again – in one day – in order to officiate at the festivals in both cities. Shulgi continued his father’s policies, bettering them when he saw fit, and is considered the greatest king of the Third Dynasty of Ur for the heights civilization reached under his reign. Among his many building projects was a wall which ran 155 miles (250 kilometres) along the border of the region of Sumer to keep out the barbarian tribes known as the Martu (also as the Tidnum) who are most recognizable to modern readers from their biblical designation as Amorites. Shulgi’s wall was maintained by his son, grandson, and great grandson but could not hold back the tribes on the borders. The wall was too long to be properly manned and, since it was not anchored at either end, invaders could by-pass the obstacle simply by marching around it. In 1750 BCE the neighboring kingdom of Elam breached the wall, sacked Ur and carried away the last king as a prisoner. The Amorites, who had already found their way around the wall, merged with the Sumerian populace and, in this way, Sumerian culture came to an end with the fall of Ur.

The Decline of Ur and Excavation 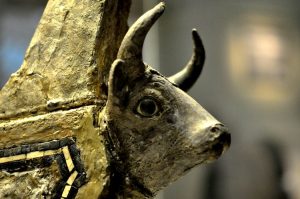 The silver cow’s head decorating the front has inlaid eyes of shell and lapis lazuli. This lyrewas found in the ‘Great Death-Pit’, one of the graves in the Royal Cemetery at Ur. From Ur, southern Mesopotamia, Iraq. Early dynastic period, 2600-2400 BCE. (The British Museum, London) / Photo by Osama Shukir Muhammed Amin, Creative Commons

In the Old Babylonian Period (c. 2000-1600 BCE) Ur remained a city of importance and was considered a centre of learning and culture. According to the historian Gwendolyn Leick, “The `heirs’ of Ur, the kings of Isin and Larsa, were keen to show their respect to the gods of Ur by repairing the devastated temples” (180) and the Kassite kings, who later conquered the region, did the same as would the Assyrian rulers who followed them. The city continued to be inhabited through the early part of the Achaemenid Period (550-330 BCE) but, due to climate change and an overuse of the land, more and more people migrated to the northern regions of Mesopotamia or south toward the land of Canaan (the patriarch Abraham, some claim, among them, as previously noted).  Ur slowly dwindled in importance as the Persian Gulf receded further and further south from the city and eventually fell into ruin around 450 BCE.

The area was buried under the sands until it was visited by Pietro della Valle in 1625 CE who noted strange inscriptions on bricks (later identified as cuneiform script) and images on artifacts which were later recognized as cylinder seals used to identify property or sign letters. In 1853 -1854 CE the first excavation of the site was made by John George Taylor in the interests of the British Museum who noted multiple grave complexes and concluded the site may have been a Babylonian necropolis.

The definitive excavation of the ruins of Ur was conducted between 1922-1934 CE by Sir Leonard Wooley, working on behalf of the British Museum and the University of Pennsylvania. The famous Tomb of Tutankhamun had been discovered by Howard Carter in 1922 CE and Wooley was hoping for an equally impressive find. At Ur he uncovered the graves of sixteen kings and queens, including that of the Queen Puabi (also known as Shub-ad) and her treasures. The Great Death Pit, as Wooley named it, was the largest of those uncovered and, in it, “Wooley found six armed guards and 68 serving women. They wore ribbons of gold and silver in their hair, except one woman who still held in her hand the coiled-up silver ribbon she was unable to fasten before the sleeping potion took hold that painlessly carried her away to the afterworld with her master” (Bertman, 36). Wooley also uncovered the Royal Standard of Ur which celebrated the city’s triumph over her enemies in war and the festivities which the people enjoyed in peace. In an effort to out-do Carter’s triumph in the discovery of Tutankhamun’s tomb, Wooley claimed that he had found evidence at Ur of the biblical Flood but notes taken by his assistant, Max Mallowan, later showed that the flood record at the site in no way supported a world-wide deluge and was more in keeping with the regular flooding caused by the Tigris and Euphrates rivers. Further excavations at Ur since Wooley’s time have corroborated Mallowan’s notes and, in spite of persistent beliefs to the contrary, no evidence supporting the Flood story from the Bible has been found at Ur nor anywhere else in Mesopotamia.