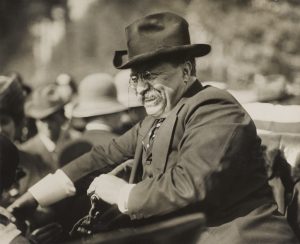 1912 was a very unusual election year.

Although William Howard Taft was running for reelection, the Republican party had been badly split between the conservative faction backing Taft and the reform faction that had supported former president Theodore Roosevelt.  After an acrimonious Republican Convention, Taft had been renominated and Roosevelt broke away from his party completely.  Leading a large contingent of disgruntled Republicans, Roosevelt launched the Progressive Party (more popularly nicknamed the “Bullmoose Party”) and announced that he would run for an unprecedented third term as President.   While Taft and his supporters denounced Teddy Roosevelt as being power-hungry,  the presidential campaign quickly became a three-way race between Taft, Roosevelt, and Democratic candidate Woodrow Wilson.

Despite tensions running high, nobody was expecting what happened on October 14, 1912 while Theodore Roosevelt was campaigning in Milwaukee, Wisconsin.

After attending a dinner at Milwaukee’s Gilpatrick Hotel, President Roosevelt prepared to leave for a speech to be given at the Milwaukee Auditorium.  Just as he  was entering his car however, a nondescript man approached and shot Roosevelt at close range.  Fortunately, the bullet’s momentum was slowed by passing through Roosevelt’s spectacles case and all fifty pages of the prepared speech in his jacket pocket (long speeches can be useful).   While the bullet lodged in his chest, Roosevelt decided that he wasn’t that seriously injured since he could still breathe normally (although  he was clearly bleeding).  Turning down suggestions that he go to hospital, he insisted on giving his speech as planned.   The shooter, a 36-year old Bavarian immigrant named John Flammang Schrank, was taken into custody.

Roosevelt still refused to go to hospital even though his aides noticed that blood was pooling around his feet in the car as they were driving to the auditorium.   Ever the showman, Roosevelt worked the shooting into his speech by showing the audience his bloody shirt and the bullet hole in his speech.  He also quipped that “it takes more than that to kill a Bullmoose”.  Ben Hecht was covering the speech for the Chicago Journal and later described it in his autobiography A Child of the Century:

Surgical bandages wrapped the thick torso under his short cut-away coat.  Teddy’s voice was fainter and squeakier than I had ever heard it.  He held up his hand for silence…and we gave him the auditorium.  He looked as if he might topple over, if he kept standing too long.

The audience was completely riveted by the speech and Roosevelt’s bravery.  After the speech, he was rushed to hospital where doctors determined that he wasn’t seriously wounded.  The position of the bullet in his chest was considered too dangerous to remove by surgery and the doctors decided just to leave it in place.  He would carry the bullet for the rest of his life. 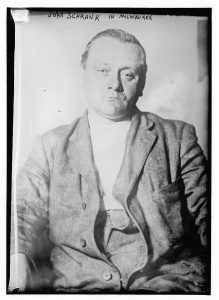 As for John Flammang Schrank, the doctors examining him were left to learn about him and his reasons for shooting Theodore Roosevelt.  They learned that he was born in Bavaria (now part of Germany) in 1876 and emigrated to the United States with his family when he was nine years old.  Largely raised by his aunt and uncle,  he inherited an estate worth approximately $25,000 on their deaths.  While not a fortune even in those days, it was enough to make him comfortable.   After their deaths, and the death of his fiancee, he sold off all of his property and drifted around the East Coast working odd jobs as a bartender and reading the Bible.  He developed a local reputation for hanging around bars and public parks and mainly stayed out of trouble.   As to his reason for the shooting, Schrank would admit that he had no personal animosity towards his intended victim.

According to Schrank, he had been visited one night by the ghost of assassinated President William McKinley who had told him that Theodore Roosevelt (his vice-president at the time) had mastermined the assassination.    Schrank claimed that McKinley’s ghost had visited him more than once and, on the most recent haunting, had told him to stop Roosevelt from winning his third term.  Schrank then bought a gun and began following Roosevelt on his presidential tour.   Among Schrank’s papers was a journal that he had kept which described his obsession with Roosevelt.  After passing up another opportunity in New Orleans, Schrank followed Roosevelt to Minneapolis and shot him after hearing that he was at the Gilpatrick Hotel.   When he was arraigned in court in Milwaukee on November 12, 1912, he pled guilty to the shooting stating that “I did not mean to kill a citizen, Judge.  I shot Roosevelt because he was a menace to the country.  He should not have a third term.  I did not want him to have one.  I shot him as a warning that men must not try to have more than two terms as President”.   The court appointed a committee of five doctors to examine Schrank and they concluded that he was certifiably insane and suffering from “insane delusions, grandiose in character”.

While Theodore Roosevelt was recovering from his gunshot wound, his two opponents actually halted their own campaigns to give him a chance to recover (modern American politicians could take a lesson from that).   Although he was able to make two more speeches, Theodore Roosevelt’s campaign was effectively over.  In the election that followed,  Woodrow Wilson won with 6,293,000 votes and 435 electoral college votes.   Roosevelt came in second with 4,200,000 votes and 88 electoral college votes.  Taft received 3,485,000 votes and only 8 electoral college votes.  We’ll likely never know how Schrank’s assassination attempt influenced the election and its outcome.   Although Theodore Roosevelt’s public life essentially ended after the election, he took the shooting in stride stating that “I did not care a rap for being shot.  It is a trade risk which every prominent public man ought to accept as a matter of course.  For eleven years, I have been prepared any day to be shot”.

In 1914, John Flammang Schrank was sentenced to the Central State Mental Hospital in Waupun, Wisconsin where he would remain until his death in 1943.  He continued to insist that he had no animosity towards the “citizen Roosevelt” and seemed genuinely moved to hear of his death in 1919.   According to his obituary, Schrank had been diagnosed with “dementia praecox paranoia” and had been a model prisoner during his time in the hospital despite not associating with the other inmates.  He had no visitors during his entire 31-year hospital stay and no living relatives at the time of his death.  After Schrank died of bronchial pneumonia on September 16, 1943, his body was donated the the Marquette University Medical School for dissection.  Many of the letters that he wrote to his doctor at the hospital are still part of the permanent collection at the University of North Carolina at Wilmington.

It seems fitting perhaps that Schrank should have the final word in describing his motives for the shooting.  According to one story, the guards assigned to transfer Schrank to Central State Hospital commented that the surrounding countryside was good for hunting and fishing.   After one of them asked Schrank if he ever hunted, his simple reply was:  “I only hunt Bull Moose”.