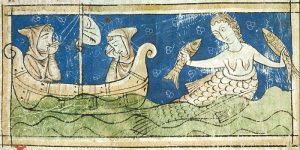 Tracing the sad medieval history of the siren and trying to understand where it all went wrong. 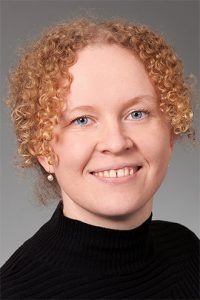 Ah, sirens. Fishy ladies with nice voices who like to eat Greek sailors, or the strident sound and strobe of emergency services: two associations that are equally familiar to those of us who have grown up with Western culture. Your choice of either may depend on your recent reading, or slight recent deafness, but you know that both mean trouble. In the pithy words of Dizzee Rascal,

The canny Rascal doesn’t mean the mythological siren, of course. He has read its autobiography and knows that it’s a nervous wreck. As time has gone on, this siren has increasingly lost confidence. Never entirely sure whether it was male or female – though gender-binary normativity was a harsh mistress in the ancient world – in the middle ages it stopped knowing whether its human bits went with bird, dragon, snake or fish bits. This triggered a slow decline into confusion with mermaids and sea-monsters. In this post we trace the sad medieval history of the siren for the first time, and try to understand where it all went wrong.

We first meet the siren early in Greek mythology, where it is a flesh-eating part-bird, part-human demon. It happily ignores the question of which bit is which, and what gender the whole should be called. In slightly later stories it’s persuaded to be a beautiful woman with the body of a bird from the waist down. This allows it to make sweet music and lure in handsome men sailing by. Life is good, especially since, as we hear from Vergil and Ovid, it gets to live on Anthemoessa, an island whose name means ‘flowery’. The siren and its sisters are either the daughters of the river god Achelous or the sea god Phorcys, and are well-established in Greek literary monuments such as the Odyssey in the eighth century B.C. and the Argonautica in the third century B.C. No problems there so far. Admittedly all the sirens commit suicide in despair at failing to trap either Odysseus or Jason of the Argonauts, but let’s not talk about that.

With the advent of Christianity, our siren enters adolescence, starts wearing metaphorical black and discovers evil. In the second-century Greek translation of the Bible it comes to represent the desolation of Babylon:

Now beasts make their home there
and an empty echo is heard in the houses.
Sirens have their habitation there
and demons dance.
Onocentaurs dwell there
and hedgehogs breed in the halls.

In the fourth century, Saint Jerome tarred the siren even further in the same passage when he translated the whole bible into Latin, by declaring that it lives in temples of pleasure. This sounds nice but was a bad thing by that point in history:

But wild beasts shall rest there, and their houses shall be filled with serpents, and ostriches shall dwell there, and the hairy ones shall dance there: and owls shall answer one another there, in the houses thereof, and sirens in the temples of pleasure.[1]

Essentially, in Jerome’s translation, sirens ‘desecrate the very idea of worship.’[2] Jerome makes this idea more explicit in his commentary on the biblical book of Isaiah, in which he translates the Hebrew word thennim, ‘jackal’, as ‘siren’:

Moreover, sirens are called thennim (תנים), which we interpret as either demons, or some kind of monsters, or indeed great dragons, who are crested and fly.[3]

Oh hi, dragon-siren! There is no doubt that it is evil – as evil as huge flying snakes, which is what dragons were thought to be in Christian late antiquity and the early middle ages. We have an indication of this from the influential seventh-century encyclopedia of Isidore, Archbishop of Seville and patron saint of the internet, in which he lists dragons as members of the snake family along with basilisks, vipers, asps and lizards.[4] This encyclopedia is in fact well worth reading for its sage observations, such as: ‘Ships go more slowly if they carry a tortoise’s right foot’ and ‚people advise pregnant women not to gaze at repulsive animal faces… lest they should bear offspring resembling what they have seen.‘[5]

But we digress. By associating sirens with snakes, Jerome compares them to Satan, who as the serpent in the Garden of Eden seduced Eve with his siren-like voice and words into eating the forbidden fruit.[6] Could this association explain images of the siren with a snake tail, such as this one from a ninth-century manuscript made near Rheims (now in Bern)? It appears in the Physiologus, a text that describes the habits of various kinds of animals: 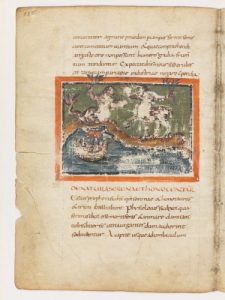 The siren has changed again, we note, this time from dragon to snake-woman. Although this drawing is usually thought to be the first known image of a siren with a fish tail, its coils actually resemble the tail of the snaky salamander, as shown in another image from the same Bern manuscript (underneath the distressed devil in a tub, to which we will come shortly): 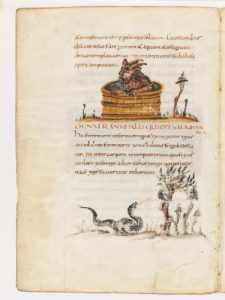 Devil in a tub and salamander. Bern, Burgerbibliothek, MS 318, fol. 13v, at www.e-codices.unifr.ch

Whether the ninth-century artist thought he was drawing a snake or a fish, he was making a conscious or unconscious mistake: the corresponding Latin text clearly describes the siren as being a bird-woman. Was this an educated artist who tried to correct the text via the image, to match Jerome’s commentary? Or was he simply copying the picture from an earlier manuscript, and so repeating an earlier mistake? We may never know, though the eighth and ninth-century renaissance of Latin and bible study under Emperor Charlemagne makes attempts at correction not only possible but likely in many manuscripts.

Interestingly, the drawing of the devil in a bath-tub above the salamander could illustrate either the salamander’s story below or the story of the stag above.[7] The stag, we are told, spits water at its enemy, the dragon, to make it come out of its cave. When it does, the stag swallows it whole: an action the Physiologus interprets as the drowning of the devil’s works in the bath of rebirth or baptism. The dragon and the devil are linked again! The salamander, on the other hand, is said to put out the fire in an oven, and make a hot bath go cold, if it crawls in. So our little mournful devil is either in the process of being drowned, or sitting in chilly water, or both: good reasons not to enjoy your bath.

But we digress again. The siren in the Bern Physiologus, whether fish-woman or snake-woman, is not the earliest known fishy lady. One famous and earlier fish-woman is to be found in the Gellone Sacramentary, a manuscript made around 780 near Meaux or Cambrai, France: 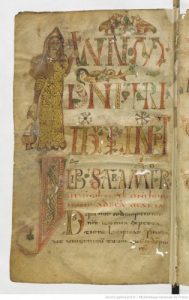 Strictly speaking, however, there is no indication that this figure was thought to be a siren. The very earliest known fish-siren is to be found as a description in the seventh-century Liber monstrorum or Book of Monsters, in which the storyteller paints ‘a little picture of a sea-girl or siren, which if it has a head of reason is followed by all kinds of shaggy and scaly tales.’[8] Where does the Liber monstrorum get its fish-siren? To try to answer this question, we must look back to the misty strangeness of years B.C.

There were plenty of fish-bodied beings in the ancient world, among them the Mesopotamian god Dagon; a fish-bodied goddess from Israel, thought to be the Syrian deity Derketo or Atargatis; and Oannes, a mythical teacher of wisdom in third-century B.C. Babylon. Stones from as far back as 6500–5500 B.C. representing fish goddesses with breasts, vulvae and bird-claws have been found at Lepenski Vir in Serbia. The sides of the second-century statue of the goddess Artemis Ephesia at Caesaria in Israel are covered in mermaids holding their tails. Most of these representations were associated with the great Mother Goddess, with fertility and femininity.

So by the time Pliny the Elder came on the scene in the first century A.D., fish-beings were old news. In his Natural History, the model of present-day encyclopedias, tritons or male mermaids were ‘known by their form’ and scaly fish-tailed nereids or sea-nymphs were expiring in great numbers on the beach.[9] In fact Pliny’s sea tended to leave a debris of the fantastic strewn across ancient beaches, including, he says, huge fish-monsters and hundreds of enormous rams and elephants. The nereids never had a chance.

But there is no easy inheritance left by Pliny to the Liber monstrorum. In the section of the Natural History dedicated to birds, he casts doubt on the existence of sweet-singing, flesh-eating bird-sirens from India.[10] Already by Pliny’s time, then, there was a sharp distinction between piscine nereids and avian sirens, and how these came down as one to the Liber monstrorum is unclear.

It is likely, though unproven, that such cultural mixtures come about partly because different kinds of texts can bleed into each other quite easily. We see this in Isidore of Seville’s encyclopedia, in which he first describes bird-sirens as follows: ‘people imagine three Sirens who were part maidens, part birds, having wings and talons…’;[11] and yet only a few paragraphs later, tells us: ‘also in Arabia there are snakes with wings, called sirens (sirenae)…’[12] This contradiction is probably a result of Isidore’s use of different sources: one influenced by classical mythology, the other influenced or written by Jerome.

The siren has come a long way, suffering many a sea-change: from bird, to dragon, to snake, to fish. Its identity crisis remains sadly unresolved. This did not stop one medieval artist, however: in this final image of our confused subject, from a ninth-century copy of the Brussels Physiologus, the siren is both fish and bird.

Originally published by Mittelalter under the terms of a Creative Commons Attribution-ShareAlike 3.0 United States license.