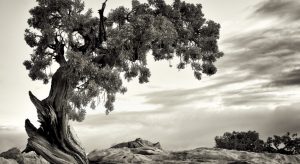 In the American Southwest, the loss of juniper trees at the hands of mining and development could cost the Hopi a crucial part of their heritage.

By Stewart B. Koyiyumptewa (left) and Dr. Chip Colwell (right) / 08.31.2017
Koyiyumptewa:  Archivist and ethnohistorian for the Hopi Tribe’s Cultural Preservation Office
Colwell:  Sapiens editor-in-chief, Senior Curator of Anthropology at the Denver Museum of Nature and Science

A rumbling, low boom unfurled over the land like a current of thunder. But it was a clear, cloudless day in northern Arizona. We realized the reverberation was the echo of an explosion—dynamite loosening the earth—and that the strip mine was finding its way toward a colossal seam of coal.

It was the fall of 2015, and the Kayenta Mine’s owners, Peabody Energy, the world’s largest coal company, had proposed to expand the mine into neighboring areas. If that were to happen, then the place we were standing on would one day be peeled open like a can of sardines to reveal the prize of shiny, midnight-black coal.

The Kayenta Mine has long been a source of controversy. Every year it ships millions of tons of coal by rail to the Navajo Generating Station northeast of the Grand Canyon. The power plant keeps air conditioners humming in Phoenix and Los Angeles, and lights shimmering in Las Vegas and beyond. 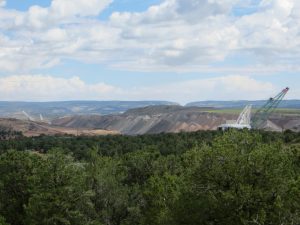 Stripping the earth’s top layer to excavate enormous seams of coal, the Kayenta Mine has obliterated a forest of juniper trees. / Photo by T.J. Ferguson

We were there as anthropologists with a team of researchers and Hopi elders to study the project’s potential impact on religious sites, archaeological remains, springs, and more. But at every stop, the elders talked about the juniper tree. The trees were so abundant—blanketing every hill that hasn’t been mined—that at first it seemed strange to be concerned about the potential loss of this plant. There were ancient Pueblo villages and graveyards to worry about. There were precious springs and rare songbirds.

But the elders kept returning to their fears for the junipers.

“We’re always going to be here,” said Bill Preston, a soft-spoken Hopi traditionalist from the village of Walpi. “This is our home. All these plants have life. What will happen when they blow it up? What for? Money. But it will be gone by the time our children grow up.”

The one-seed juniper is the most humble of trees. It grows leisurely, each year lucky to reach some 6 inches closer to the sky. A mature plant, a survivor of centuries of droughts and storms, may stand no taller than you or I. The bark, a coarse calico of grays, sheds from the trunk in long strips like peeling skin. The tree is just common enough to easily fade into the dusty landscape in which it grows—a range that extends from Arizona to the western regions of Texas and Oklahoma, from southern Colorado to perhaps as far south as Mexico. It is an evergreen, but its leaves typically feel sharp and look burned. Few would say it is beautiful.

And yet, the juniper’s ordinariness masks an array of remarkable gifts. It is an oyster of the high desert that hides many pearls inside. To the Hopi people, the juniper is a vital part of their traditional way of life. 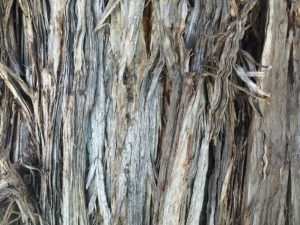 Hopis use the juniper’s coarse bark to start fires, and they bundle it to make ceremonial torches. / Photo by Chip Colwell

That Hopis ascertained the tree’s extraordinary endowments is unsurprising given their dependence on wild plants for their survival. With cultural origins that stretch back thousands of years in the Southwest, the Hopi Tribe now numbers about 14,000 members who live in rural isolation. The heartland of the tribe is in northern Arizona, on a stark, high plateau that receives about 10 inches of rain a year. Hopis must make use of every possible thing. They are traditionally farmers of corn, beans, squash, and other vegetables. But their livelihood also depends on gathering a range of wild resources—animals, minerals, and especially plants. Some travel up to 200 miles away from home to gather them. These collected plants are a part of everyday Hopi life. They are used for food, housing, tools, decoration, medicine, ceremonies, and magic. Many Hopi traditionalists could name without hesitation such plants as nanakopsi (bee balm), mö’öngtorhavu (bush mint), wùusi (sand muhly), hunvi (cliffrose), and hoongavi (arrowweed).

When we directed a research project in 2006 to evaluate Hopi cultural resources in the path of a new power line that stretches from New Mexico to Nevada, we discovered that Hopis depend on more than 200 plant species for their cultural practices.

Consider that. How many wild plant species and their uses can you name?

The juniper provides Hopis the basics of warmth, shelter, tools, and food. Hopis do not cut down junipers but rather collect deadwood for winter fires and for building houses, corrals, and fences. Juniper roots, which can stretch downward 200 feet, are carved into cradleboards, bows and arrows, and hairpieces that are used for the famous squash-blossom hairdo of Hopi maidens. The bark—làapu—is a fire starter, and can be rolled into a ceremonial torch called a kopitsoki. Collected deadwood is often the fuel used to cook piiki—a paper-thin rolled wafer bread made of ground blue corn.

The juniper tree’s berries are considered a “starvation food” for when the tribe’s crops fail. The berries are still eaten, but just as significantly, they recall Hopi history—all the hard times their ancestors endured. “Just because people are living an easy life now, it hasn’t always been that way,” Owen Numkena, a Hopi elder, told us during a related project. “It’s important to remember.” 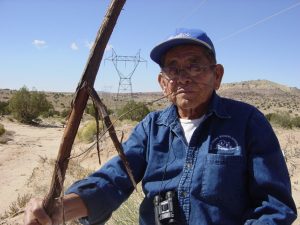 The juniper’s deeper value to the Hopi lies in its powers to purify and protect. “It’s a tree with a lot of medicine,” Preston said. Boiled as a tea, the leaves are a medicine; the sap can be consumed to clean people’s intestines out. Newborn children are rubbed with juniper ash, while their mothers, who veered toward death during childbirth, are bathed in juniper-infused water. Berries ground to a paste are used to clean new mothers further. Even misbehaving youth are held to the smoke of a smoldering juniper fire to purge them of mischief. Juniper smoke also cleanses Hopis who have encountered the dead.

Hopis see the forests of juniper as interconnected to the entire natural world, a thread woven into the tapestry of life. Junipers provide shade to other plants; they give shelter and food to wildlife; their roots retain the soil, keeping erosion at bay.

In the dry, high desert of northern Arizona, the juniper contributes further to Hopi life by bringing the most precious resource of all: water. “These trees trap the clouds and bring the rain,” Lyman Polacca, an elder from the village of Sitsomovi, said. “They’re like our rainforest.”

This is good news for the juniper stands we saw as we stood near the mine back in 2015. And some people welcome the energy project’s demise for other reasons too. The power station has degraded air quality. Peabody’s mining operations have destroyed hundreds of Hopi ancestral sites. And since the company began mining the area in the 1970s, it has used billions of gallons of pristine drinking water.

But others fear what will become of the region’s precarious economy. Peabody claims that 99 percent of its workers are Native American. The Hopi Tribe depends on royalties from the mine for upward of 85 percent of its annual budget. But while the economic costs of the plant shutting down would be steep for the Hopi and others in the region, there would also be substantial and important benefits, such as cleaner air and water, the restoration of harmony in the ecosystem, and a return to a more respectful and mindful way of life on Hopi lands. 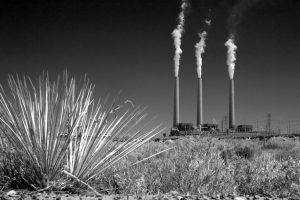 The Navajo Generating Station in Arizona may close, along with the Kayenta Mine, but the many threats to junipers and other plants that Hopis traditionally use will continue. / Photo by Nathan Rupert, Flickr

The Dakota Access pipeline, which carries oil nearly 1,200 miles from North Dakota to Illinois, has made headlines over the last year for threatening traditional sites and waterways. But across the United States, countless development projects threaten resources that Native Americans depend on for their cultural survival. As anthropologists, we’ve worked with the Hopi Tribe’s Cultural Preservation Office for years to document the natural and cultural resources that are in the path of many new pipelines, power plants, mines, and roads.

Pinyon-juniper vegetation still covers about 100 million acres across the American West. But these ecosystems have declined over the last century. Since the 1800s, pinyon-juniper forests in the Southwest have been dramatically reduced by livestock grazing, landscape fragmentation, the timber industry, wildfire-control techniques, invasive plant species, and development projects. Hopis have agonized over these changes. Because Hopis do not cut down junipers, they must find healthy forests that produce deadwood they can collect. They have already lost easy access to junipers in their immediate homeland. When juniper forests are cleared, Hopis lose a resource that is at the heart of their way of life.

Preston told us that after witnessing the mined and reclaimed areas, he became consumed with thoughts about the survival of the Hopi homeland. “These places were put here for us, and it is our responsibility to preserve them for the future,” he said.

Hopis are further troubled by the decline in juniper forests because the tree is not merely a tool for their culture. It is a living testimony to sacred practices. “People have come here for centuries, and there are offerings everywhere,” Preston said. “The whole landscape is filled with offerings.” When the juniper is gathered for its many uses, Hopis leave offerings of corn meal at the base of each tree to feed the spirits—and as a sign of respect for the tree’s gift and a prayer that the tree continues to grow strong.

Each juniper thus becomes a shrine, an offering place. The hills and plateaus of the northern Southwest are not just forests of junipers. They are forests filled with living shrines.