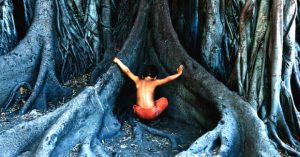 The Link Between Humans and Trees

Trees are considered sacred in many cultures. Tree worship, in one form or another, has been practiced, almost universally, by ancient peoples in every corner of the globe.

It is no wonder that trees have captured the human imagination since the beginning of time. Their strength, deeply rooted in the Earth, is an inspiration. Their trunk and branches are a wonder of nature because they stand sturdy and impenetrable most of the time, yet they can flex and sway with the wind when needed.

The whisper of a breeze in their leaves, or the sight of ants marching in a straight line up or down their trunks, remind us of the magic of nature that trees embody. They live for hundreds or even thousands of years, and so we revere them as keepers of past secrets and sentinels of the future.

Watching their cycles of growth–shedding of leaves, and re-flowering in the spring–people have long perceived trees as powerful symbols of life, death, and renewal. Since the beginning of time, humans have had a sense that trees are sentient beings, just like us; that they can feel pain, that they bleed when they are hurt. Trees even look like us. People have a trunk; trees have arms. And so we innately feel a deep connection to them. 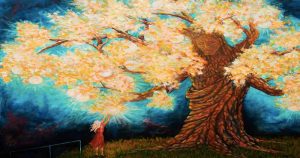 Some humans have a sense that trees are sentient beings, just like us.

Many people say they can feel a tree’s vibrational energy when placing their hand upon its bark. With their deep roots, trees carry significant grounding energy. We naturally feel peace and serenity when walking in the shade of trees or on a forest trail.

Trees Help Us Every Day

A recent study shows that trees remove so much pollution from the air that they “prevented 850 human deaths and 670,000 cases of acute respiratory symptoms in 2010 alone.” When an insect called the Emerald Ash Borer killed off a significant number of trees in the American Midwest in the 1990s and 2000s, rates of human death from cardiovascular and respiratory illness increased.

More difficult to quantify is the psychological effect that trees have on people. People who spend time outdoors, or even those who have access to windows looking out at trees, have been shown to have better health than those who do not.

The Universal Tree of Life: Both Ancient and Modern

The concept of a Tree of Life, often symbolizing the connections between all life forms, is found in many religions and philosophies, dating back as early as ancient Egypt. The Egyptian tree of life symbolized creation and represented the chain of events that brought everything into existence.

Fast forward to modern science. The tree has become the quintessential symbol of biological evolution, as its ever-branching image poignantly depicts the unmistakable interconnections between all living species on the Earth. 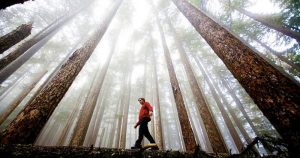 People who spend time outdoors have been shown to have better health.

The Tree Leaf and Eternal Life

Consider this beautiful commentary from Thich Nhat Hanh reflecting on a tree leaf:

I asked the leaf whether it was frightened because it was autumn and the other leaves were falling. The leaf told me, “No. During the whole spring and summer I was completely alive. I worked hard to help nourish the tree, and now much of me is in the tree. I am not limited by this form. I am also the whole tree, and when I go back to the soil, I will continue to nourish the tree. So I don’t worry at all. As I leave this branch and float to the ground, I will wave to the tree and tell her, ‘I will see you again very soon.’ “…That day there was a wind blowing and, after a while, I saw the leaf leave the branch and float down to the soil, dancing joyfully, because as it floated it saw itself already there in the tree. It was so happy. I bowed my head, knowing that I have a lot to learn from the leaf because it is not afraid–it knew nothing can be born and nothing can die.

Trees are considered sacred in virtually every place where humans have settled. There are many profound beliefs surrounding trees that people have held for millennia. Here are some interesting and touching examples:

For the Sng’oi people of Malaysia, a person and a tree can belong with each other, and this relationship is maintained for life. Certain trees and certain people belong together. When a person belongs with a tree, they also belong with its offspring: any trees that grow from the seeds of the first tree, no matter how far the seeds may scatter. The Sng’oi people call upon their intuition to know which child trees have sprung from which parent trees.

The World Tree is said to dwell in three worlds: Its roots reach down to the underworld, its trunk sits on the Earth, and its branches extend up to the heavens. Many cultures share a belief that this tree is the Axis Mundi or World Axis which supports or holds up the cosmos. For the Mayan peoples, the Axis Mundi was a massive Ceiba (in other cultures, it is called Kapok) tree that stands at the center of the world. The Mayan beliefs reflect that human souls first came into being as the sacred white flowers on the branches of the Ceiba tree. Souls of the dead Mayan ancestors rose from the roots of the Axis Mundi, up through its branches and into the celestial realms. 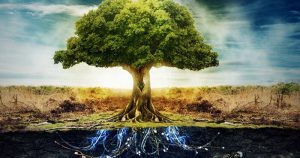 Trees literally and metaphorically represent connection and the cycles of life.

In Germanic regions, it was believed that mankind was created from tree trunks, echoing the perception that people and trees have much in common.

In Sweden, some trees were considered ‘wardens’ and could guard a home from bad luck. The warden was usually a very old tree growing on the lot near the home. The family living there had such great respect for the tree that they would often adopt a surname related to the name of the tree.

A well-known sacred tree in Norse mythology was Yggdrasil, a giant ash tree that was said to link and shelter the nine worlds that were believed to exist.

In Irish and English folklore, fairies would be found wherever Ash, Oak, and Hawthorne trees grew together. Hawthorn trees were regarded as a powerful symbol of protection, and were often planted near houses to ward off lightning, as well as evil spirits. On the dawn of Beltane, it was believed that women who bathed in the dew from a Hawthorne blossom would become beautiful, and men who washed their hands in the dew would become skilled craftsmen.

Buddhists have a deep reverence for the Bodhi tree–a type of fig tree with heart-shaped leaves–beneath which the Buddha is said to have meditated for 49 days; trying to reconcile his mind to the fact that there was suffering in the world. On the 49th day, he stood and thanked the tree for providing shade for him, and in that instant he attained enlightenment. Today, in the same location where the Buddha is believed to have sat, there grows a descendant of that same Bodhi tree. Buddhist myths say that the tree will live there until the world is destroyed, and the place where it grows will be the last place to be destroyed; and when the world is reborn, that site will be the first place to appear. 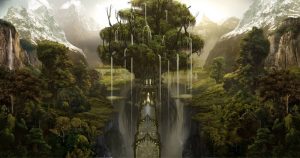 The villagers of Piplantri, in Rajasthan, India, celebrate the birth of each little girl by planting 111 trees in her honor. The entire village works together to plant and care for the trees. This tradition not only ensures that the environment will be able to support the increasing population of the village, but it has also brought harmony, and a drop in crime, to the village.

In Malaysia, people maintain a very intimate relationship with trees. “There is a practice of tree planting around houses to the extent that the walls and wooden structures are allowed to give way to the roots of creeping plants, purposely sown at the bases of these structures.” The graveyards in Malaysia are covered so thickly with trees that the entire grounds are cool and sheltered from the tropical sun. The trees are allowed to take root into the graves and it is said that the trees whisper prayers to the creator, asking for forgiveness of past transgressions of those buried there.

These are just a few of the many ways trees have been honoured throughout time. In today’s age, let’s not forget the significance of trees, their history and how they are essential for human life.