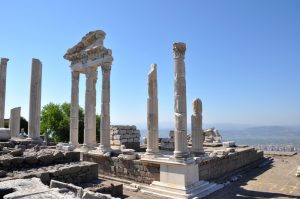 The Temple of Trajan, also called Trajaneum, is one of the most spectacular structures in Pergamon’s Upper Acropolis area. It is also the only Roman monument in this location.

The construction of the temple was initiated under the Roman emperor Trajan (hence it’s name) and completed by his successor Hadrian. The purpose of the temple was to provide a venue for the religious cult of both rulers as well as Zeus. Since Hellenistic times, the worship of rulers as gods had become customary in Asia Minor. As the monument of Roman domination, the Trajaneum’s purpose was to strengthen the bonds of Pergamon with Rome and with the Imperial family. The Trajaneum’s position, dominating the summit, was like a propaganda statement concerning who was the ruler of the city and the province. The Temple of Trajan was the fourth imperial cult temple to be built in the province of Asia. 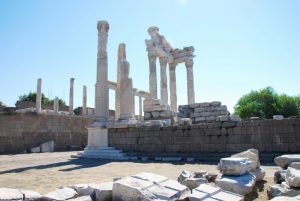 The first temple in Asia Minor dedicated to the Roman emperor was also erected in Pergamon, in 29 BC by the authorization of Augustus. The second temple of this kind was built in Smyrna in 26 AD and the third one was the Temple of the Sebastoi, formerly called the Temple of Domitian, which was dedicated in Ephesus in 89/90 AD under the reign of emperor Domitian.

The construction of the temple

The temple was constructed on a high podium covered with marble, in the middle of the site on the top of the acropolis hill. The large space necessary for the erection of this temple was obtained by levelling the rock in the side of the mountain. Because the natural topography of the acropolis limited construction, a platform supported by arches was built to support the temple and its courtyard. The steep slope on its side was traversed by a giant substructure. 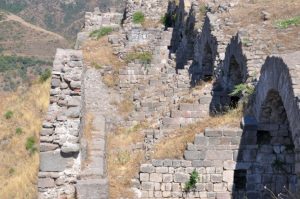 On the slope of the rock Roman engineers built strong parallel supporting walls which were covered with barrel vaults. This method helped to economize on material and the construction was only limited by the height of the wall. The substructure towards the valley finishes with an ashlar stone wall 23 meters high. The upper part of this wall, with a large arch in front of each vault, only constitutes the facing of the construction. In the lower part, however, the vaults were filled to form a passageway. In the western area, where the ground is lower, two rows of vaults were built one behind the other.

In late antiquity the decay of mining led to a decrease in available metals. Its increasing value inspired the plundering of dowels and clamps from ancient buildings. The iron joining elements from the Trajaneum’s substructure were removed and the supporting walls of the terrace were cut through in order to get to the metal parts. 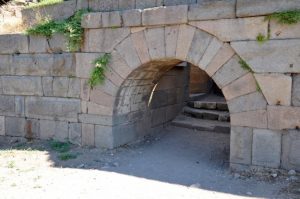 In Byzantine period the temple wall facing the valley was included in the acropolis fortifications and restored several times. Some parts of the substructure were used as cisterns and warehouses. The low-lying openings were closed with slabs of stone, the walls were plastered with mortar and the crowns of the vaults were broken through to enable scooping out the water. Later, until the end of the 19th century, the marble components of the building served as material for lime burning.

The rectangular podium is 68 meters long and 58 meters wide. Because the temple stands on the highest point of the acropolis hill, it is supposed that it was erected in the place where other, Hellenistic building had earlier stood. 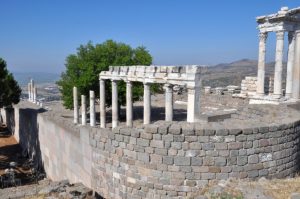 In accordance with Greek traditions the main part of the building was free-standing. On three sides it was surrounded by stoas with monolithic columns and a special form of Corinthian capitals. The stoa on the back of the temple is higher than others by 5 meters, because of the terrain unevenness.

The temple is of a peripteros type i.e. it was surrounded by a portico with a single colonnade. There were 9 columns on both longer sides and 6 columns on shorter sides of the structure.

Next to the temple there is an altar where the statues of the emperors once stood. In Revelation 13:15 this was described as the image of the beast. Near the entrance to the Trajaneum two inscriptions were found. The first one is from the city of Thyatira and it congratulates Pergamon for becoming neokoros for two imperial cult temples. This title granted by the Roman Senate and the Emperor under the Empire to certain cities which had built temples to the Emperor or had established cults of members of the Imperial family. There were approximately 40 cities holding the neocorate, most of them concentrated in the province of Asia, but also in neighbouring provinces. The second inscription dates from the time of Trajan and it declares him the lord of the land and the sea. 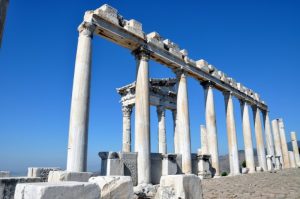 The Temple of Trajan was uncovered and examined in the years 1879-1880 and 1885 by an architect H. Stiller, but for decades the ruins were left as they had been found. In the 1960’s the Turkish Administration initialized the process of its restoration. The challenge was taken up by German Archaeological Institute (DAI) that provided the initiative to re-examine the building. Preparations started in 1965 and in 1976 the restoration programme was approved by the Turkish Directorate of Antiquity. The reconstruction started with the halls which promised an easier process because of the weight and dimensions of working pieces. Due to the preservation of complete pieces, columns in particular, the northern hall offered the most promising preconditions. The reconstruction lasted until 1994 with the cooperation of architects, archaeologists and stonemasons from various European countries working with numerous Turkish specialists. The Trajaneum was splendidly reconstructed through anastylosis (i.e. the reassembly of existing, but loose parts) by German archaeologists.