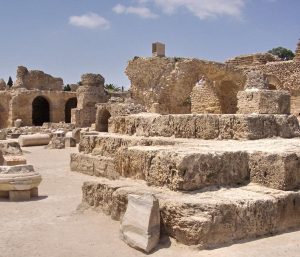 The Carthaginian assault on their Numidian neighbours gave the Romans the perfect excuse to crush this troublesome enemy once and for all.

An artist’s impression of what the Roman naval attack on Carthage may have looked like during the Third Punic War, 149-146 BCE. / Image from Total War

Causes of the War

Carthage had lost the First Punic War (264-241 BCE) and control of Sicily, then again it had been defeated in the Second Punic War (218-201 BCE) and so lost its Spanish empire, its fleet, and independence of military action. In both wars, the Carthaginians had also been made to pay Rome massive reparations. Nevertheless, Carthage recovered from the Second Punic War relatively quickly and coins and trade goods from this period have been found across the Mediterranean (even in the Balkans) which attest to the city’s prosperity based on trade. Carthage kept on friendly terms with Rome too, declaring their great general Hannibal – Roman enemy No. 1 – an exile when he fled to the court of Antiochus III. The city became an important source of grain and barley for Rome too; they managed to regularly pay the reparations from the Second Punic War, and even gave military assistance to Rome’s campaigns elsewhere.

As the second century BCE wore on, though, the Carthaginians gradually became more aggressive in their demands for control of their own destiny. Carthage sorely resented the loss of its territory to Numidia under the rule of Masinissa. The Numidians had been steadily expanding their territorial control so that ultimately they acquired around half of Carthage’s territory as it had stood in 200 BCE. The Carthaginians responded to an attack on Oroscopa by sending an army of 31,000 men to fight the Numidian king in 150 BCE. Carthage’s campaign was a disaster and their army was annihilated, but Rome now had the perfect excuse to finally crush its old enemy once and for all, sack Carthage, and take some easy war booty. Such figures as Marcus Porcius Cato (Cato the Elder), who had seen for himself Carthage’s resurgence during a diplomatic visit in 153 BCE, persistently demanded in the Roman Senate that as the Carthaginians had waged war without Roman permission, and worse, had done so against an ally of Rome, ‘Carthage must be destroyed’. The Third Punic War was about to begin.

This is a 3D rendition of what Carthage might have looked like at the height of its power. In the foreground you can see the Cothon, the city’s famous military harbour. / Image from Total War

The Carthaginians sent envoys to Rome to explain their actions and grievances against Masinissa, but they were rebuffed. Many senators had been pushing for military action against Carthage for the last two or three years, and now seemed the final straw. Then, an important development may have persuaded the more cautious members of the Senate. Seeing the writing on the wall, Utica, perhaps wisely, defected to the Roman cause. A long-time ally of Carthage, the city would provide a good harbour for a Roman invasion force just one day’s sail from Carthage. In 149 BCE the Senate continued a charade of diplomacy by asking for 300 Carthaginian noble children as hostages but then revealed its true intentions by finally declaring war for a third time on Carthage. An army of up to 80,000 infantry and 4,000 cavalry was dispatched to North Africa.

The Romans first demanded of Carthage an unconditional surrender under which terms they were to disband their army, hand over all arms, and release all prisoners. On top of that and perhaps indicating Rome’s intentions to destroy Carthage no matter what happened, the Carthaginians were told to leave Carthage completely and resettle in another place not closer than 16 kilometres to the coast. Carthage, now with nothing much to lose, decided to make a stand. Slaves were released from the city and a Carthaginian army of 30,000 recalled from the Numidian border. The city and its population of 200,000 prepared for what would be a three-year siege.

The Roman force was led by the consuls Marcius Censorinus and Manius Manilius but the first engagements did not go well, and Carthage, with its massive fortifications, resisted the Roman siege on the city. Carthage had some 34 kilometres of defensive walls to shelter behind, parts were built in a triple defensive line while other sections were protected by palisades, ditches, and the sea. They resisted everything the Romans could throw at them. More importantly, the Romans were unable to completely blockade the port where merchant vessels still managed to resupply the city. On top of that, the Carthaginians sent out sorties to counter-attack, including fire-ships which set the Roman fleet ablaze. They managed in another raid to destroy some of the Roman siege engines, and then an epidemic hit the besiegers in the long hot summer of 148 BCE.

Meanwhile, the Carthaginian army was remaining a stubborn resistance in the countryside. The city of Hippacra refused to surrender against sustained Roman attacks led by the consul Piso, and even the Numidians, under a new king Bithyas, sent 800 cavalry to join the Carthaginian land army. The Romans had hoped for a quick and easy capitulation, but it was beginning to look like the Third Punic War might grow to the epic proportions of the previous wars.

More drastic measures were needed and taken in 147 BCE when the Romans, now commanded by the young and able consul Publius Cornelius Scipio Aemilianus, built a better siege wall around Carthage and its harbour, including a mole on the south side of the city. This latter structure would block the single access to Carthage’s mercantile harbour which led in turn to the large circular inner naval harbour. At last, Carthage could no longer be supplied by sea. In desperation, a small Carthaginian fleet twice tried to break the blockade by sailing through a newly made second exit to the harbour but both times they were forced to retreat.

An artist’s impression of what the Roman siege of Carthage may have looked like during the Third Punic War, 149-146 BCE / Image from Total War

Scipio then systematically attacked the walls near the harbour using the mole as a base. The Carthaginians responded by attacking and burning some of the Roman siege engines, but Scipio persisted and managed to take control of the new entrance dug by the Carthaginians. Once more the city was totally cut-off, and Scipio was making the siege seem a whole lot easier than his predecessors had done. The Carthaginian army was hemmed in at Nepheris, 25 kilometres south of Carthage, and unable to aid the city. In the winter of 147/146 BCE Scipio felt confident enough to leave Carthage choking from his stranglehold and defeated the army at Nepheris after a three-week siege.

The final Roman hammer blow came in the spring of 146 BCE when they launched an all-out attack on Carthage. Again, the harbour area was selected as the point of entry, and this time, the Romans broke through the defences and slowly advanced through the city. After seven days of brutal street-fighting and much time-wasting looting by ill-disciplined legionaries, only the citadel remained to be taken. Here the Carthaginian commander Hasdrubal and 900 desperate Roman deserters held out in the temple of Eshmun. They could expect no mercy, and Hasdrubal’s torturing of Roman prisoners on the battlements earlier in the battle, even if done to steel the resolve of the Carthaginians, must now have been regretted. As the Roman assault gained ground, Hasdrubal gave himself up but, in shame and outrage, his wife threw herself and her two children onto the massive funeral pyre onto which the last remaining soldiers also committed themselves. Carthage had finally fallen.

An artist’s impression of what the Roman siege of Carthage may have looked like during the Third Punic War, 149-146 BCE / Image from Total War

All of the inhabitants were enslaved and the city utterly destroyed (the myth that the land was then spread with salt to prevent resettlement is a later invention). A curse was then set on any person who attempted to resettle the area. North Africa was then made a Roman province while those cities who had been loyal to Rome, such as the new capital Utica, were given the privilege of freedom from tax. For his exploits, Scipio became Cornelius Scipio Aemilianus Africanus (known later as Scipio Africanus the Younger to distinguish him from his namesake grandfather, Scipio Africanus the Elder) and was awarded a triumph in Rome.

Carthage would remain uninhabited until the city was re-founded by Julius Caesar and further encouraged by Augustus a century later. As history is written by the victors, the Punic culture was persistently bashed and maligned by generations of Roman writers, but it remained remarkably resilient, as did the Punic language, in the countryside and smaller settlements of North Africa long after the Punic Wars had robbed it of its figurehead city.