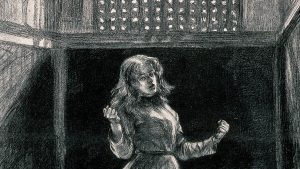 Prison officers tried to regulate women’s minds and bodies, and maintain a new disciplinary routine in the second half of the 1800s. Many female inmates resisted.

In July 1859, the Superintendent of Mountjoy Female Prison, Dublin, wrote in desperation to the Directors of Irish Convict Prisons about the “lunacy” of Mary Murray. Her conduct in prison had become “so outrageous and violent” that she had to be confined in a straitjacket. He sought to be relieved of her care immediately, and later that year she was transferred to Dundrum Criminal Lunatic Asylum.

Mary Murray was one of the many women confined in the new women-only convict prisons of Brixton in London (1853) and Mountjoy Female Convict Prison in Dublin (1858). The system of separate confinement – introduced to convict prisons in England in 1842 and Ireland in 1850 – was designed to strictly regulate male and female prisoners in body and in mind to produce deep-seated and lasting reform. 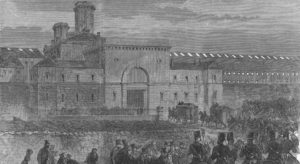 Like Mary, other women prisoners posed challenges to this ‘modern’ system of punishment and reform, such as that imposed in Liverpool Borough Gaol, which took in huge numbers of women. In the summer of 1871 an average of 500 women, notable for their “drunkenness and depravity”, were locked up there each night.

At Liverpool, they generally served very short sentences but returned over and over again for the same crimes. Due to sheer numbers, they often had to be accommodated two to a cell, where it was almost impossible to enforce the rule of silence.

In the Victorian period, the prison system was created by men for men. Accommodation for women was often an afterthought, and the penal system devised for them was largely a modified version of that designed for male convicts.

Sir Joshua Jebb, Head of the Convict Prisons Directorate, was the man tasked with designing new prisons for female convicts. He maintained that they were unable to withstand the prolonged nine-month terms in separate confinement imposed on male prisoners at the beginning of their sentences. Consequently, women were isolated for four months, confined to individual cells where they ate, slept and worked for 23 hours per day. 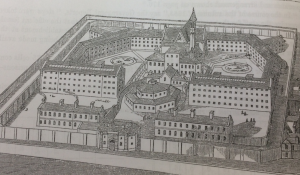 An aerial view of the Brixton women-only prison, built in 1853. The system of separate confinement was introduced to convict prisons in England in 1842. / From The Criminal Prisons of London, and Scenes of Prison Life, Griffin, Bohn, and Company (1882)

The hard labour so important to the male prison regime was not used at Brixton and Mountjoy. Women instead progressed through several disciplinary stages intended to make them more malleable to reform: separate confinement, associated labour and, finally, transferral to female-only refuges. These included establishments at Fulham in London and Goldenbridge in Dublin, where they were trained in domestic work and prepared for eventual release.

Women’s prisons, shaped by the ideologies of domesticity and ideals of motherhood, focused on restoring female and maternal qualities. Women required saving twice, firstly from their criminality and then from their deviance from anticipated female behaviour.

This upturning of expectations had consequences. 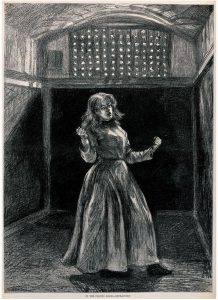 Women were isolated for four months, confined to individual cells where they ate, slept and worked for 23 hours per day. / Wellcome Collection, Creative Commons

Certain behaviours when perpetuated by women have, historically, been believed to require greater censure. Female prisoners have long faced condemnation not only for the crimes they have committed but also for their inability to conform to the standards expected of women.

Women – reports say – began to “break out”: to display outrageous behaviour, use disgusting language, commit acts of violence and destroy prison property. Men too were liable to such behaviour, but ‘breaking out’ was viewed as distinctly unfeminine and requiring greater censure.

In response, some prison governors sought a more severe prison regime. In 1856 George Laval Chesterton, Governor at Coldbath Fields Prison in Clerkenwell, London, lamented the behaviour of these “specimens of turbulence, pugnacity and hardihood”, who had forfeited the right to chivalrous and sympathetic treatment but could not be subject to treadwheel labour.

Irish female convicts were described as “wholly debased” and even more tainted than their English counterparts. Henry Martin Hitchins, Inspector General of Government Prisons in Ireland, considered the “abandonment of the strictest Separation unadvisable” and prior to the opening of Mountjoy, lobbied for a harsher regime than the one at Brixton.

As well as being liable to ‘break out’, female convicts were considered to be volatile, irritable, depressed and suicidal, and unable to withstand their relatively brief period in separation. Brixton’s officers, including Superintendent Emma Martin, claimed that the women were anxious and restless, subject to “irritability of temper” and “depression of spirit”. At Mountjoy, Dr Awly Banon observed that the women were very excitable, with “incorrigible tempers”.

Dr David Nicolson, a medical officer in several English prisons, described women’s frantic outbursts and destructiveness, marked by “the shivering of window panes and the tearing of blankets and sheets into fragments”, prompted by a restless craving for change, even for the worse. Bellina Prior, confined in Armagh Prison in 1888, attempted to cut her throat with glass. When asked why, she replied, “It was only a bit of fun.”

Prison officials largely related women’s disruptive behaviour in prison to their impulsiveness and lack of self-control, typically female traits. And women were believed to be more greatly affected by the deprivation of communication, especially while in separation. In 1860 Brixton’s superintendent reported uncovering a ‘scheme’ where poorly behaved women would feign suicide attempts to be placed in association with others.

A Physical Barrier to Discipline

Prison authorities also had to manage the physical health of their charges, and the female maternal body posed a distinct set of questions and potential difficulties. Lying-in wards – often refashioned cells – and nurseries had to be created, and the strict regulation of exercise, communication and dietary provision was renegotiated and modified for pregnant and perinatal women.

Pregnant women and new mothers were placed in separate confinement to undergo what was believed to be a vital part of their sentence, yet the Superintendent of Cork prison noted that this should only be imposed “without detriment to their health or that of their offspring”.

Locking up pregnant women in isolation for up to 23 hours a day prompted debate about the psychological anxiety it might cause, plus there was the risk of them giving birth alone without any medical assistance. Medical officers often recommended that pregnant women be placed with other prisoners who could call for help.

Mary and Her Baby 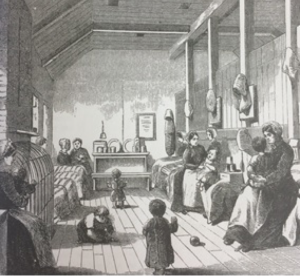 Convict nurseries allowed women who had given birth shortly before entering prison, or who gave birth in prison, to remain close to their infants. / From The Criminal Prisons of London, and Scenes of Prison Life, Griffin, Bohn, and Company (1862)

When Mary Connor entered Grangegorman prison in Dublin in July 1891 to start her five-year sentence, she had recently given birth. She brought her infant with her but, within months, confounding all expectations about female behaviour and the conduct of a new mother, she used vile language, assaulted a fellow prisoner, broke several panes of glass and tore up her clothes in fits of temper.

In December 1891 Chief Warder Thomas Singer, who had been called upon to restrain Mary, reported to the General Prisons Board that she was a troublesome prisoner. But he also emphasised: “She has an infant at the breast nine months old which makes it difficult to deal with her.”

Mary’s case was not unique: several women used their maternal body as a vehicle for resistance and a barrier to discipline. While subject to the censure of the prison authorities, such women could not be placed in isolation or put on a punishment diet, as they had to care for and nurse their infants.

No Longer Rational Beings, but Fiends

Prison officers found women prisoners a constant and perplexing challenge. Roman Catholic prison minister James Nugent summed up these long-standing difficulties when he observed in 1877: “The poker, the knife, the bottle, and the glass have become the ordinary weapons of attack and defence… Not a week passes without some one being brought to the prison whom drink has maddened and robbed of all female decency, whose language and actions are so horrible that they seem no longer rational beings, but fiends.”

These difficulties have not gone away, and the locking up of women continues to pose difficult and complex questions for the prison authorities.

And what of the fate of Mary Murray, our convict from Mountjoy? In December 1864, enquiries were made about her at the Dundrum Criminal Lunatic Asylum. The prison directors were informed that Murray had escaped from Dundrum 11 months earlier. The constabulary were alerted, but nothing further was heard of her.