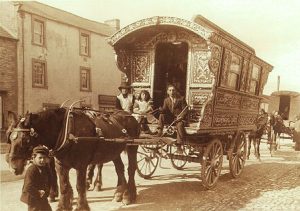 Studying the Gypsies taught this British historian that we learn more about Us than Them when we see how they were treated. 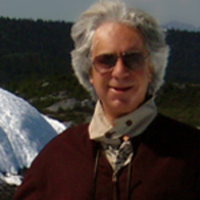 Whenever I told anyone that I was writing a history of Gypsies they would offer an anecdote, a memory, or an opinion about modern Gypsies blighting the English countryside, begging and pick-pocketing in European cities, or otherwise causing a nuisance. The views I heard were largely hostile, a mixture of myths and confused impressions about traditional Romani Gypsies, Irish Travellers, and newly-immigrant Roma in the twentieth and twenty-first centuries. Some also had romantic notions about Gypsy freedom and exotica, that made the Gypsies enviable and attractive, in galleries, boutiques, and fashion-styles with names like ‘The Gypsy’s Secret’.

Missing from popular notions is a sense of history. Too many of us have been persuaded that the Gypsies are a people without history, or outside of history, for whom the passage of time is irrelevant. A related idea, prevalent among some Romani activists, is that Gypsy history is complete, that enough is known about past persecutions, so that further research is unnecessary. The work presented in my new book, Gypsies: An English History, proves both propositions to be wrong. The history of Gypsies in England and Europe is closely bound up with social changes and the powers and policies of the state over several hundred years. Explorations in English archives yield dozens of fresh stories of interactions with Gypsies that require a reassessment of ideas about their visibility, status, identity, criminality, neighborliness, and victimhood. Gypsies are part of English history, and their treatment over time reveals much about that society’s dealings with its minorities.

Three observations about Gypsies need emphasis: First, that they constitute a people, not a lifestyle (deserving a capital ‘G’), whose history in Europe can be traced back six hundred years; second, that Gypsies have long occupied a niche in the rural economy, as itinerant traders, makeshift craftsmen, entertainers, and fortune tellers; and third, that prejudices against them are persistent, deep-rooted, and generally wrong. 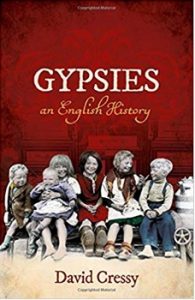 Gypsies first appeared in England in the early sixteenth century, as part of a Europe-wide migrant diaspora that originated in India. (The linguistic and genetic evidence is irrefutable.) Tudor governments tried to expel them, and piled on punishments, but Gypsies – generally known as Egyptians – continued to flourish. A statute of 1563 that threatened Gypsies with hanging was only briefly enforced, though not repealed until 1783. The Gypsies mostly kept to themselves, outside the official frameworks of church and state, which made them all the more suspicious. Among their distinctive characteristics was their language – apparently an incomprehensible “uncouth gibberish,” that was later recognized as Romani, with Sanskrit roots. Nineteenth-century scholars tried to learn Anglo-Romani before it disappeared, and traces remain to the present. Estimates of Gypsy numbers are imprecise, but there may have been 30,000 in England by the end of the eighteenth century, and more than twice that number by the end of the nineteenth. They were joined in the twentieth century by Irish Travellers, and more recently by Roma from eastern Europe, the three groups together now including a quarter of a million people.

Gypsies engaged with their settled neighbors in multiple ways, but mostly entered historical record when they got into trouble, as petty thieves, deceitful fortune tellers, or incorrigible wanderers. Witnesses mentioned them dealing in horses, making baskets, mending tin wares, operating fairgrounds, and selling clothes and trinkets. There is very little evidence before the twentieth century to associate Gypsies with begging. Though officialdom was largely hostile to Gypsies, and attempted to move them along, ordinary people were much more sympathetic, trading and socializing with Gypsies, provided they didn’t stay too long. The cases reviewed in Gypsies: An English History reveal Gypsies sharing meals, attending dances, and performing work with local villagers, as well as sometimes purloining silverware and stealing poultry. In the nineteenth and twentieth centuries Gypsies have faced harassment for camping on common land, or even on land they own, and have occasionally experienced violent expulsions.

Though one strain in popular culture finds Gypsies romantic, without the cares of the taxed and employed, the predominant opinion has been hostile. One of the surprises of this work on the history of Gypsies is the recurrence of prejudicial commentary from the sixteenth century to the present. The Elizabethan pamphleteer Thomas Harman accused those “rowsey, ragged rabblement of rakehells” of “deep dissimulation and detestable dealing,” and condemned all Gypsies as “thieves and whores.” Attorney General Sir John Popham described the Gypsies as “lewd, vagrant, idle, seditious, disordered, and tumultuous,” and wanted them punished. The same sentiments could be heard in the eighteenth century, when writers described Gypsies as a “race of vermin,” and denounced them for “stealing people’s goods and spoiling their servants.”

Condemning Gypsies at the Quarter Sessions in 1819, one reverend magistrate gave his opinion that “this atrocious tribe of wandering vagabonds ought to be made outlaws in every civilized kingdom and exterminated from the face of the earth.” Officials in Nazi Germany and elsewhere would share this view. An English newspaper editorial in 1931 deemed Gypsies a “shiftless, worthless people … whose presence in a civilized community is a most doubtful asset.” More recently the Sun newspaper railed against the Gypsy “nuisance,” with a campaign to “stamp on the camps.” Even one reviewer of Gypsies: An English History added comments of her own about their “antisocial behavior” and “damage to fields and wildlife,” eliciting the online response that Gypsies were “undesirables … that spread chaos and distress wherever they happen to invade.”

Throughout their history Gypsies have provoked sharp responses, in politics, policing, administration, opinion, and law. These responses reveal the anxieties of the powerful, and the concerns of the mainstream, about outsiders who do not “belong.” Generalizations about them are mostly ignorant, stereotypical, and wrong. A better- informed treatment allows them to be named as individuals, and finds amongst them every variety of wealth and poverty, honesty and dishonesty, probity and deceit. It recognizes that Gypsies have adapted and survived, while the environment in which they lived became more urban, industrialized, bureaucratized, and cosmopolitan.

Paying attention to Gypsies over five centuries reveals much more about English history than about the Gypsies themselves. We learn more about us than them. The interior of Gypsy culture remains opaque, not least because Gypsy voices and testimony are missing, and no source before the modern era offers any Romani writing. Nonetheless, the history of their dealings and interactions has proven to be retrievable from sources that are surprisingly abundant. If there is any truth in the observation that “the past is negated” in modern popular culture, and that the history of Gypsies in England had been “deleted from national memory” this book is a step toward its restoration.