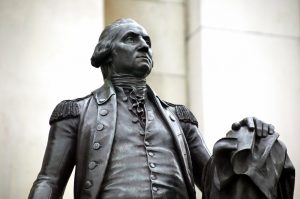 It is as an entrepreneur that Washington serves best to inspire Americans in the twenty-first century.

By Dr. Edward G. Lengel / 02.14.2016
Director of the Papers of George Washington
University of Virginia

Presidential candidates love to invoke George Washington. His example inspires politicians of all persuasions; even zealots profess to seek his guidance. The images they conjure are sometimes real and often fallacious. Washington appears alternately as a moralist or social libertarian; big government advocate or inveterate rebel; and of course Republican or Democrat—all despite his real-life detestation of political faction.

Washington appears most commonly in political discourse as president, general and family man. Each guise is inspirational in its way. As president he not only cemented the authority of the executive office but upheld its integrity. As general he displayed profound personal courage and determination. As a family man he demonstrated steadfast love and affection to his wife and stepchildren despite his inability to father children of his own.

It is as an entrepreneur, however, that Washington serves best to inspire Americans in the twenty-first century.

Industry was integral to Washington’s character. Denied a formal schooling because of the early death of his father, he devoted his early years to practical home-based learning in subjects like accounting, geometry and mathematics. His mother taught him thrift, self-discipline and a horror of debt. In his first teenage job as a surveyor, Washington demonstrated a passion for knowledge and—crucially—a willingness to work hard to attain it. Within a few years he became a skilled tradesman with the makings of a steady and potentially lucrative career. For a lesser man, this would have sufficed.

Beset by restless visions of a prosperous future for himself and his countrymen, however, Washington cast aside his nascent career as a surveyor and invested in America’s greatest natural resource: land. Military service during the French and Indian War had awakened him to the dimensions of America’s bounty, from the richness of its soil to the potential of its waterways as highways of commerce. By the time he was twenty-seven—thanks in part to his marriage in 1759 to the wealthy widow Martha Dandridge Custis—Washington had acquired a vast estate that spread across much of Virginia and pressed to the gateways of Appalachia. 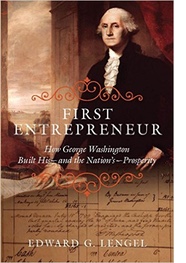 A passion for improvement drove Washington to experiment with crops and new technologies to increase productivity. Almost immediately he recognized the evils of British colonial rule that forced Americans to work within a credit system that fostered wastefulness and debt. Craving self-sufficiency, he abandoned the tobacco economy that had nurtured generations of his ancestors and converted his farms to wheat. This allowed him to evade British oversight and buy and sell for cash on his own account. Being less labor-intensive than tobacco, wheat also allowed Washington to devote resources to industries like milling, spinning and weaving, ironwork, cobbling, and even large-scale fishing.

Morality and industry were for Washington two sides of the same coin. A moral man was industrious, and vice versa. British colonial rule thus appeared inherently immoral, for it denied Americans the right to pursue their own improvement in a free market. Boycotting British goods served to foster political and economic independence even as it promoted the concept of American self-sufficiency. Washington became a passionate advocate of a continental movement to “buy American.” He and George Mason declared in the 1774 Fairfax Resolves that “it is the indispensable Duty of all the Gentlemen and Men of Fortune to set Examples of Temperance, Fortitude, Frugality and Industry; and give every Encouragement in their Power . . . to the Improvement of Arts and Manufactures in America.”

As Commander in Chief of the Continental Army during the Revolutionary War, Washington recognized that he could not afford to undermine American civil society in his quest for victory. This knowledge guided not only his deference to civilian authority, but his determination to end the war as quickly as possible. Recognizing the fundamental principles at stake, he refused to sanction any transgression against American property rights, no matter how desperate his army’s plight. The volatility of national and state currencies, however, resulted in out of control inflation—by 1781 a horse could cost $150,000—and threatened to undermine any hopes of a stable economy conducive to national prosperity.

Returning to Mount Vernon after the war’s victorious conclusion, Washington set about improving his estate to the most modern standards. Rejecting wartime jealousies, he looked to Great Britain—which had passed through an Agricultural Revolution and was in the early throes of an Industrial Revolution—as the example Americans should follow. In the 1780s Mount Vernon became a shining example of the scientific agriculture and industry then being practiced overseas. He also purchased and improved western lands in hopes these would not only build his wealth but establish commerce that could knit the young nation together.

Economic instability nonetheless remained a menace, not only to prosperity but to the survival of the United States in a world of powerful, warring empires. Washington decried the inability of the Confederation government to raise taxes effectively, and to maintain its authority and thus the domestic peace so essential to commerce. Stable (but not overbearing) government and the rule of law, he believed, was the best guarantor of liberty. He fought for ratification of the Constitution not because he believed it was perfect, but because it provided the best means upon which the United States could grow and eventually become great.

As President of the United States, Washington believed that “promoting & rendering permanent the national prosperity . . . should be my great—my only aim.” The role of government in this was clear: to maintain domestic and international peace, and to establish a level playing field upon which the American people, by their industry, could create and build the national wealth. Education (and religion) should promote industry, which in turn fostered morality. It was for these reasons—and these only—that the government should maintain its authority to raise taxes. Working with Alexander Hamilton and Thomas Jefferson (and harnessing, however temporarily, the mutual animosity of these two brilliant men), Washington brought national debt under control, stabilized the currency, and above all fostered peace.

Slavery, Washington slowly came to realize, fundamentally contradicted his national vision by robbing enslaved people of their right to work freely and enjoy the fruits of their own labor. By the end of his life he recognized that slavery corrupted its victims and enforcers alike, and would ultimately lead his country toward a moral and economic dead end. By setting terms in his will for the freedom of the enslaved people on his own estate, Washington set an example—albeit belatedly—that he hoped his countrymen would follow.

Industry, vision, integrity, innovation, diligence, calculated risk-taking—all were principles that guided Washington the entrepreneur. His surviving business records and accounts are vast, and models of scrupulous efficiency. In retirement a year before he died, Washington constructed a highly profitable whiskey distillery on his estate, demonstrating his continuing desire to improve even in the twilight of his life. When he passed away in 1799, his will divided his extensive estate equally among his heirs, giving each of them just enough to build their own prosperity but not enough to relapse into comfortable ennui.

Our nation’s current and aspiring political leaders would do well to look to Washington’s business principles as guidelines for the future. So would individuals. Washington was not born great; he became so by virtue of his steadfast determination to improve himself and his countrymen—through simple hard work.