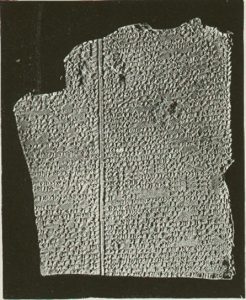 The Deluge tablet of the Gilgamesh epic in Akkadian

The Epic of Gilgamesh is one of the earliest epics in world literature. It is inscribed on twelve clay tablets in cuneiform. The earliest verses were composed in Southern Mesopotamia before 2000B.C. The most complete version of the epic was found in the library of the Assyrian king Ashurbanipal. However, fragments were also found in Syria and Turkey, showing that the epic was popular throughout the Middle East. [1] The Epic of Gilgamesh reveals many things about the society that created it, including aspects of their religion, worship of gods, and social structure, as well as human settlement at the time. The way in which the epic was recorded suggests that the Sumerians were the first known literate inhabitants of Mesopotamia. Part of the epic also bears strong resemblance to parts of the bible.

The Epic of Gilgamesh reveals aspects of the political and social organisation in the Mesopotamian city of Uruk. There are references to a king, priests, warriors, and nobles. The gods are also referred to often throughout the epic. The Sumerians believed that the gods created humans to be servants, and that humanity was at the mercy of the gods. The number of gods referred to in the epic reveal that it was a polytheistic society, in which each of the gods had a direct influence on people’s lives. It is clear throughout the epic that the gods were a very important part of Sumerian life. Temples were built in the city as places of worship, and daily life was strongly influenced by these gods. This suggests that the people had great respect for their gods and believed strongly in divine intervention. The epic reveals that the gods had the power to create, as in the case of Enkidu, and destroy, as shown by the great flood. The people often turn to the gods for help, a further illustration of their importance within the society: “Anu listened to their complaints”.[2]

I will go in front of you, and your mouth can call out: ‘Go on closer, do not be afraid!

Enkidu agrees to go first into battle in order to protect Gilgamesh and is prepared to fight even though he does not want to. The epic also reveals attitudes towards death and immortality. The gods are immortal and are the only ones capable of granting immortality. Immortality is associated with power and respect. After the death of Enkidu, Gilgamesh realises that he too must die and begins to panic.

The Epic of Gilgamesh also reveals aspects of human settlement as well as aspects of its physical layout. The prologue reveals that Uruk was developed to the extent of having a defence wall made of brick.

Go up on the wall of Uruk and walk around, examine its foundation, inspect its brickwork thoroughly.[3] 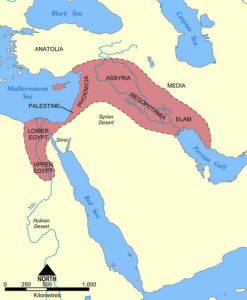 This suggests that the city had a sizeable population and defence was necessary. It is revealed that the wall is made of brickwork, suggesting that the city was advanced for its time. Further evidence to suggest this comes from the way in which the epic was recorded, as this reveals that the Sumerians were the first known literate inhabitants of Mesopotamia.[4] The epic reveals that the city was located near the Euphrates River. Accordingly, Uruk was located in the Fertile Crescent.[5] This suggests that they would have had access to natural resources and therefore would have had a strong trading system. The quest to the Cedar Forest would have provided the city with access to cedar wood, which was particularly useful in Mesopotamia as it is stable and more resistant to heat than other woods. This would have put the city in a powerful position, as other cities would have required access to these resources. Parts of the epic found in other parts of Mesopotamia suggest contact with these places. This may have been due to people from the city settling in these places, a trade agreement, or the cities being conquered.

The story of the great flood in the epic bears strong resemblance to the story of Genesis in the Bible. In Genesis, the flood is sent to wipe out life on earth, as humanity has angered the gods:

And Yahweh said, ‘I will wipe man from the face of the earth, man, my own creation and also the animals of the field, and the creatures that crawl on the ground, and the birds of the air; for I regret having made them.[6]

This is also the case in The Epic of Gilgamesh: “The hearts of the Great Gods moved them to inflict the Flood”.[7] There is also a strong similarity between Noah and Utanapishtim, as both save life on earth by building a wooden boat, and in turn are blessed by the gods.[8] These similarities give more credibility to both the Bible and the Epic of Gilgamesh. Many cultures have their own version of the great flood, and the similarities between these stories suggest that they were based on true events.

The Epic of Gilgamesh reveals many things about the society that created it. It gives an insight into the political and social organization of the city, as well as aspects of its physical layout. Sumerian attitudes towards the Gods, death, immortality and friendship are also revealed throughout the epic. The Epic of Gilgamesh also reveals some of the human settlement patterns of the time. It suggests that the city had access to important natural resources, therefore placing it in a powerful position. The strong similarities between the story of the great flood told in the epic and the bible, as well as other versions of the great flood from many other cultures gives credibility to both the Epic of Gilgamesh and the bible.