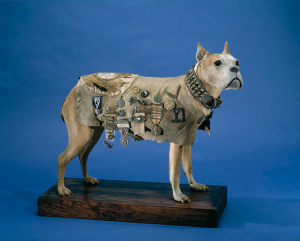 Official mascot of the 102nd Infantry, 26th “Yankee” Division, and the first dog to be given rank in the U.S. Armed Forces.

While training for combat on the fields of Yale University in 1917, Private J. Robert Conroy found a brindle puppy with a short tail. He named him Stubby, and soon the dog became the mascot of the 102nd Infantry, 26th Yankee Division. He learned the bugle calls, the drills, and even a modified dog salute as he put his right paw on his right eyebrow when a salute was executed by his fellow soldiers.

Stubby had a positive effect on morale, and was allowed to remain in the camp, even though animals were forbidden.

When the division shipped out for France aboard the SS Minnesota, Private Conroy smuggled Stubby aboard. Hidden in the coal bin until the ship was far at sea, Stubby was brought out on deck where the sailors were soon won over by the canine soldier. Stubby was soon discovered by Private Conroy’s commanding officer who allowed Stubby to remain after the dog gave him a salute. 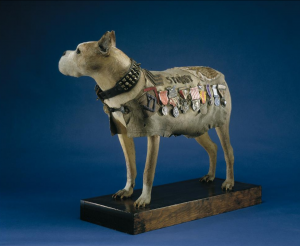 When the Yankee Division headed for the front lines in France, Stubby was given special orders allowing him to accompany the men to the front lines as their official mascot. The 102nd Infantry reached the front lines on February 5, 1918. Stubby soon became accustomed to the loud rifles and heavy artillery fire. His first battle injury occurred from gas exposure; he was taken to a nearby field hospital and nursed back to health. The injury left him sensitive to the tiniest trace of gas. When the division was attacked in an early morning gas launch, most of the troops were asleep. Stubby recognized the gas and ran through the trench barking and biting at the soldiers, rousing them to sound the gas alarm, saving many from injury. Stubby also had a talent for locating wounded men between the trenches of the opposing armies; he would listen for the sound of English and then go to the location, barking until paramedics arrived or leading the lost soldiers back to the safety of the trenches. He even caught a German soldier mapping out the layout of the Allied trenches. The soldier called to Stubby, who put his ears back and began to bark. As the German ran, Stubby bit him on the legs, causing the soldier to trip and fall. He continued to attack the man until the U.S. soldiers arrived. For capturing an enemy spy, Stubby was put in for a promotion to the rank of sergeant by the commander of the 102nd Infantry. He became the first dog to be given rank in the United States Armed Forces. Later, Stubby was injured during a grenade attack, receiving a large amount of shrapnel in his chest and leg. He was rushed to a field hospital and later transferred to a Red Cross recovery hospital for additional surgery. When Stubby became well enough to move around at the hospital, he visited wounded soldiers, boosting their morale. 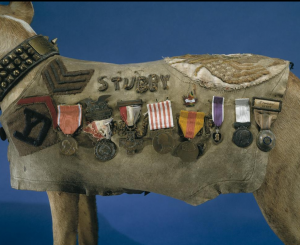 By the end of the war, Stubby had served in seventeen battles. He led the American troops in a pass-and-review parade and later visited with President Woodrow Wilson. He visited the White House twice and met Presidents Harding and Coolidge. Stubby was awarded many medals for his heroism, including a medal from the Humane Society. It was presented by General John Pershing, the commanding general of the United States Armies. He was awarded a membership in the American Legion and the YMCA. When his master, J. Robert Conroy, began studying law at Georgetown University, Stubby became the mascot of the Georgetown Hoyas. He died in 1926.