Around the world, canine conservationists are helping humans and wildlife co-exist.

It is still cool in the morning as Spots gets ready to start work. Calm and confident, the imposing 10-year old light brown Kangal is leading a herd of goats into a pasture. “He is always excited to go out with the goats,” says Tyapa Toivo, small livestock manager at the Cheetah Conservation Fund(CCF).

In this part of north-central Namibia, the goats graze every day on the same land where leopards, cheetahs and jackals also live. But the goats are safe with Spots. He watches over them intensely, and if a predator approaches, he barks loudly and places himself between the herd and the threatening animal. This is usually sufficient to scare the predator away. “Our goats go out every day and we have cheetah roaming around, but I have never experienced losses from a cheetah,” says Toivo. “They know that this herd of goats is with a dog, so they don’t bother coming any closer.”

Spots is a livestock guard dog, and like others around the world, his job is to protect domestic animals against native predators — and so reduce humans’ perceived need to kill the predators. It’s just one way in which dogs have been enlisted to help protect threatened and endangered species around the world.

Cheetahs, the fastest land animals on earth, are struggling in the race against extinction. Once found throughout Africa and in much of Asia and numbering around 100,000 animals in 1900, cheetahs are now persisting in only 9 percent of their historic range. The global population is now estimated at about 7,100 animals. Namibia is part of the home range of the world’s largest subpopulation, numbering around 3,940.

Due to conflicts with more powerful predators such as lions and hyenas, which kill cheetahs’ cubs and steal their prey, most cheetahs live outside protected reserves and parks, including on farmland. There they face other dangers. Because they live close to humans raising cows, sheep and goats, cheetahs are often held responsible for livestock losses, and Namibian farmers have felt they had no other option but to kill the big cats to protect their herd. It is estimated that between 1980 and 1990 nearly 10,000 cheetahs were lost that way, according to CCF. Convinced that farmers and predators could co-exist, CCF turned to man’s best friend to reduce conflicts between farmers and big cats. 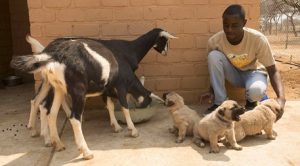 Kanga puppies and goats spend timing getting used to each other early in the training process. Photo courtesy of Isabelle Groc

Since 1994, the organization has been placing Anatolian shepherd and Kangal dogs on farms across Namibia to protect livestock against predators. The goats that Spots is watching over belong to the CCF’s model farm, which has been set up to show farmers that livestock and wildlife can live in harmony with improved herd management and the use of guard dogs.

CCF raises and trains puppies at its headquarters in Otjiwarongo, two to three hours north of the capital city of Windhoek. At a young age, the dogs are placed in pens to live and bond with goats. Before long they are ready to start protecting goats on a farm. Since its beginning, CCF has placed nearly 600 dogs on farms and currently has 160 working dogs across the country.

According to Laurie Marker, CCF’s founder and executive director, livestock losses have been reduced by 80 to 100 percent on farms with guard dogs. “I picked [Anatolian shepherds] because they are independent thinkers,” she says. “They don’t need to be told by humans what to do. They are way smarter.”

Heidi Parker, a staff scientist with the Dog Genome Project at the National Institutes of Health, says Anatolian shepherds are great for this job. “This is a very old breed, probably one of the first types of dogs that people started creating,” she says. Anatolian shepherds go back to a time when canines were working animals rather than pets. “Dogs were originally designed with jobs, they can still do jobs, and they are happy to learn new jobs,” Parker says.

The ancient qualities of working dogs are becoming increasingly valued as dogs are recruited to solve a variety of modern-day conservation challenges.

At CCF, Levi, like Spots, is a working dog, but his job is different. Handler Quentin de Jager is harnessing the powerful sense of smell of the two-year old Belgian Malinois/German shepherd cross to find cheetah scat.

De Jager brought Levi from South Africa, where the dog had been trained to respond to the scent of rhino horn in an effort to fight widespread poaching by literally sniffing out contraband. “Dogs were the most effective tool we had against anti-poaching even with all the technology we have today,” says De Jager. “Nothing compares to what the dogs are capable of.” 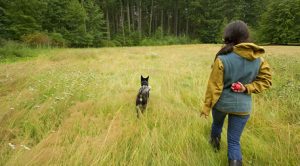 In the field De Jager says the word “Soek,” the search command in Afrikaans. Levi runs around looking for cheetah scat; once he finds it, he is rewarded with a ball to fetch. Cheetah researchers in turn are rewarded with knowledge they can use to determine how many cheetah are in an area, how they are distributed, and their health, diet and stress levels. Scat can also tell them whether cheetahs are responsible for eating livestock on farmland, which can ultimately help reduce human-wildlife conflict.

No Job Too Big

Far from Africa, in Washington state, Conservation Canines, a nonprofit organization affiliated with the University of Washington’s Center for Conservation Biology, has been training dogs to track down the scat of rare and elusive species for the past 20 years.

“There is almost unlimited use for the dogs,” says Heath Smith, Conservation Canines’ instructor and field operations manager. “So far there hasn’t been a project too big for the dogs.” 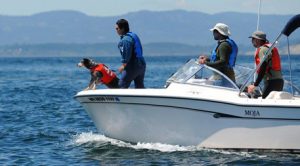 The organization’s 20 detection dogs are helping at-risk species all over the world, on land and water. In Nepal and Vietnam they have searched for pangolin scat, which provides a genetic fingerprint that makes it possible to track illegal shipments of pangolins to the regions in which the animals were captured and so home in on criminals. In Puget Sound they have tracked down scat from southern resident killer whales that researchers used to identify pregnant animals and assess the role of physiological stress in reproductive problems.

Other Conservation Canine dogs have located the elusive Oregon spotted frog in British Columbia’s wetlands and found carcasses from birds and bats struck by turbine blades as part of a study of impacts of wind farms on wildlife. One worked downtown Seattle, sniffing for PCBs so researchers could find and fix leaks contaminating nearby waterways. Another tracked scat of the rare ocellated lizard in a region of Provence where the reptile was thought to be extirpated.

“More people are realizing dogs can do this and that is a viable way to provide a lot of data quickly over large areas,” says Smith. 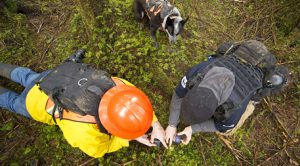 Unlike the specialized livestock guard dogs of Namibia, a specific breed is not required to do the jobs these dogs are assigned. Instead, Smith rescues energetic, unwanted dogs from shelters and redirects their insatiable play drive to the search mission. “We are looking for dogs that can problem solve and think for themselves,” he says.

While the dogs catch onto their jobs relatively quickly, the people involved with the canines often require more training. Smith says it takes two years to train a handler, and he also educates researchers about working with dogs.

“A lot of studies are designed for human surveyors, and the researchers want to put the dogs into that formula,” says Smith. “They think of a dog as a super human who is going to detect everything.” But each situation has variables, such as the direction of the wind, that affect the dog’s ability to perform the job. “It is a different world for the dog.”

In Namibia, farmers who receive guard dogs are trained to develop and implement predator-friendly livestock management techniques on their land, including the establishment of calving seasons to make it easier to monitor animals at vulnerable life stages and the use of calving enclosures called kraals. that help protect newborns from predators. Farmers are also taught how to take care of the dogs and monitor their performance on a daily basis. Over 5,000 farmers have been trained at the CCF’s model farm, says Marker.

“The dogs are not a silver bullet. They are a part of an integrated system that goes along with good livestock management,” she says. “The dog plays a role, the farmer plays a role, predators are not the enemy.”