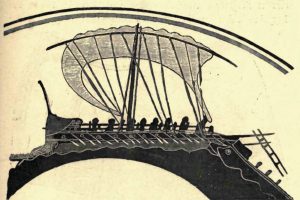 The myth of Theseus’ sacred journey’ continued to be re-enacted in an Athenian state festival held in honor of Apollo at Delos. The ritualized journey in which the two-times-seven Athenian youths sailed to Delos and back again to celebrate that they had been saved was called a theōriā. But what evidence is there about what this ship looked like?

By the second part of the Bronze Age the Mediterranean was a vibrant place, full of maritime activity, enabling exchange in knowledge and materials. The Greek art of building ships and knowing how to operate them was at the basis of western civilization. The natural drive to look beyond the horizon resulted in cultural growth, wealth, trade and migration.[1]

The ancient Greeks explored new coastlines and envisaged to enter into never-ending dialogue with anyone they encountered. This vision comes to light in the story of the mythical ship in which Theseus sailed to Crete and back again.

The story is well known. In one of the variants given to us by Plutarch[2], the dreadful king Minos had established a custom that at nine-year intervals, seven Athenian boys and seven Athenian girls were to be sent to Crete, basically to serve as dinner for the Minotaur: the half-man, half-bull that lived in the Labyrinths of Knossos. Prince Theseus of Athens, planning to make an end to this awful custom, joined the delegation of boys and girls that was ready to be sent to Crete. With the help of the Cretan king’s daughter Ariadne, Theseus was able to stab the Minotaur in the throat and, subsequently, to strangle him to death. Next, Theseus managed to escape with the famous two-times-seven young people and sailed them back to Athens. These heroic acts, together with the execution of many other and equally good works, made Theseus the all-time hero of Attica and Athens.

The Athenian youths were said to have vowed to Apollo, that if they were saved from being sacrificed to the Minotaur, they would make an annual sacred journey to Delos. This way the myth of Theseus’ sacred journey’ continued to be re-enacted in an Athenian state festival held in honor of Apollo at Delos. The ritualized journey in which the two-times-seven Athenian youths sailed to Delos and back again to celebrate that they had been saved was called a theōriā. The ship itself became known as the theoretic ship.

The images on the François kratēr, a famous wine-mixing bowl dated cicra 570 BCE—special already for the fact that it was smashed into 638 pieces by a furious museum guard—may give us an idea of the festivity. On Figure 1 we see the thirty-oared long ship, or triākontoros, landing on the beach, stern-first; the theoretical ship that sailed every year on her ritualized journey to Delos and back again.

Figure 1: Detail of the François kratēr: the ship of Theseus (fragment from vase) / Flickr, Creative Commons

The youths taking part in the re-enactment are shown throwing their hands in the air in praise; another has jumped overboard and swims to the shore. One has debarked and joins the Athenian youths and maidens on land. To the right (not shown) a line of seven youths and seven maidens dance. This dance is commonly, but some say erroneously, taken for the famous γέρανος, the Crane Dance.[3] Further to the right side is Theseus, playing a kithara, and facing Ariadne who holds a wreath and—to make no mistake about her identity—the ball of thread with which she had helped Theseus to find his way out of the Labyrinth.

The Theseus ship was designed for rowing, although sail would have been used in suitable weather. The decoration of the sternpost of the ship, called aphlaston, is in the shape of two swan’s heads, facing forward. The prow—not shown—is a boar’s head. The mast [histós: see Note on histos, below] has been lowered into the stowed position and the crew is standing to debark. The helmsman [kubernētēs] sits with his steering oar [pēdálion], his face turned around towards land. Above the gunwale run two horizontal rails supported by vertical struts. During inclement weather conditions these rails would be fitted with portable side-screens. The open ship is an áphraktos (unfenced, undefended), while when covered with fences or side boards it is called “kataphraktos” or pephragmenē (defended, fenced).[4]

An even earlier image of the annual sacred journey to Delos may be portrayed in the miniature frieze known as the “Thera Flotilla Fresco”. The Fresco represents a ship procession from a bronze age excavation at Akrotiri, on the Greek island Santorini. It was buried by volcanic ash during the Theran eruption, dated around 1627 BCE and was discovered in 1972 by the Greek archaeologist Spyridon Marinatos:

For the description of the depictions, I must borrow quite heavily from Gregory Nagy H24H, Hour 23 “Socrates in Plato’s Phaedo”[5].

The image on the south wall shows a fleet of seven ships sailing toward the home port, that is, toward the same place from which it had departed. The theōric ship in this image is the small boat with mast and sail, steered by two helmsmen. Located at the stern of each ship is a structure that looks like a cabin, with a male figure seated inside each one.(23§19)(23§18)

Further wall paintings show a variety of close-up pictures of the decorations (semi-circular garlands of flowers) that are attached to the “cabins” located at the sterns of the seven large ships.(23§18)

What is being represented in both paintings… is a prototype of a theōriā in the sense of a ‘sacred journey’ that leads to the achievement of a mystical vision. And that view of that vision is framed by the two semi-circular garlands through which the viewer views what is seen. To borrow from a modern idiom, the vision is viewed through rose-colored glasses.
H24H Hour 23, 23§20

As said, the ship which sails every year on a ritualized journey to Delos and back, was believed to be the ship on which Theseus had sailed to Delos together with the rest of the young Athenians who had been saved from being sacrificed to the Minotaur. The ship was preserved by the Athenians by taking away the old planks as they decayed and putting in new and stronger timber in their place. The ship became a standing example among the philosophers, for the logical question of things that grow: one side holding that the ship remained the same, and the other contending that it was not the same.

One thousand years after the journey of Theseus, the execution of Plato’s Socrates was delayed because this same theoretical ship had to stay in port. The weather was too bad for the ship to depart on her annual trip to Delos and while she was in port no executions were allowed. When his followers doubted that this ship was the same ship as the ideal ship in which Theseus had sailed to Delos, because every nail and piece of timber had been changed since, Socrates answered: theoretically it is still the same ship. After that the theoretical ship remained the metaphor for ideas that do not die, and the word “theory” started to develop towards its modern meaning.(23§12–14, 1–2)

The question of whether an object still is the same object after all its components have been replaced is known as the Paradox of Theseus.[6]

The following text from the beginning of Plato’s Phaedo tells the whole story:

Phaedo
It was a matter of chance, Echecrates, that things happened that way for him. The reason was that the stern of the ship that the Athenians send to Delos happened to be garlanded on the day before the trial.
Echecrates
What is this ship?
Phaedo
This is the ship in which, as the Athenians say, Theseus went to Crete when he took with him those famous two-times-seven young people. He saved them, and he too was saved. And they were said to have vowed to Apollo at that time, that if they were saved they would make an annual sacred journey [theōriā] to Delos. And even now, ever since that time, year after year, they send the ship to the god. So, every time they begin the sacred journey, they have a custom at this time of the year to purify the city and to refrain from publicly executing anybody before the ship goes to Delos and then comes back from there. And sometimes this takes a long time, whenever the winds happen to detain them. And the beginning of the sacred journey is when the priest of Apollo garlands the stern of the ship. This happened, as I say, on the day before the trial. And this was the reason why Socrates spent a long time in prison between the time of his trial and the time of his death.
Plato Phaedo 57b–58c[7] 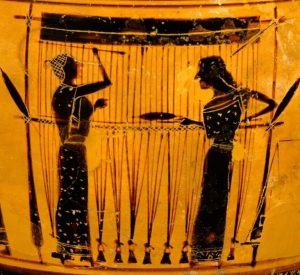 Figure 4. Attributed to the Amasis Painter. Detail of women at loom. Terracotta lekythos.

The word histos is used for anything that stands up vertically (compare “histogram”), but also for the web that is used for weaving text(-ile) which then literally becomes historiā. In Homeric poetry the word is used both for the loom of Pênelópê and for the ship’s mast of Odysseus: the captivity of Pênelópê working the loom complementing the immobility of Odysseus fixed to the mast.

Teske, Robert T. 1970. The Origins of the Goddess Ariadne. Available online at CHS.

Originally published by the Kosmos Society, The Center for Hellenic Studies under a Creative Commons Attribution-NonCommercial-NoDerivs 3.0 Unported license.