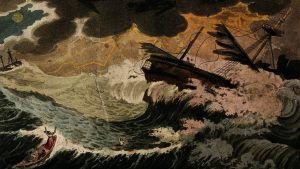 Fire in the sky has always exerted a powerful hold on our imagination, even as early scientists started unlocking the secrets of atmospheric electricity.

It might come as no surprise that Michael Faraday, one of the most influential scientists in the history of electricity, would give a rational explanation for the thrilling force to which he dedicated much of his life.

Though he dismissed emotional responses, there were many people for whom electricity still inspired awe, surprise, astonishment and terror: the feelings we often characterise as the sublime. Through experimentation and research on electricity, which began in earnest in the 18th century, we came to understand it and harness its forces. But electricity continued to arouse the passions and the imagination – in Faraday’s time and well beyond. 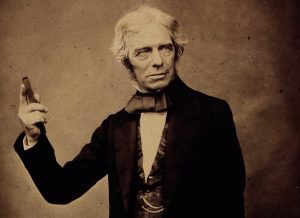 A key scientist in the study of electricity, Faraday saw it as a manifestation of God’s natural laws. Michael Faraday, Photograph by Maull & Polyblank / Wellcome Collection, Creative Commons

Atmospheric electrical phenomena such as thunder, lightning and auroras inspired fear and fascination for millennia, long before their connection to electricity was understood. Thunder and lightning were associated with the gods, from Zeus of the Ancient Greeks and Thor of the Norse pagans to the Japanese Raijin. They usually signified divine displeasure and punishment for human wrongdoing. Lightning’s symbolic significance as God’s power and sovereignty over humankind continued in the Judaeo-Christian tradition: 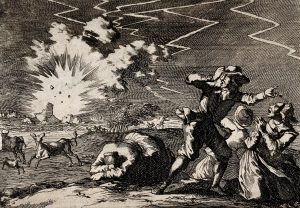 The terror, havoc and destruction wrought by lightning strikes has proved a popular subject for artists / Wellcome Collection, Creative Commons

For the Native Americans and Inuit peoples of Canada the symbolic charge of the northern lights was more benign. The Aurora Borealis was taken by the Odawa people to be a sign of the protection of the demigod Nanabozho, creator of the world. Other groups saw the northern lights as a messenger from the spirits. For the Inuit they signified the presence of the dead and lit the path of new arrivals as they passed over into the heavenly realm.

The 18th century saw an explosion of experimentation and investigation into atmospheric phenomena, culminating in Benjamin Franklin’s famous kite experiment of 1752. He proved the electrical nature of lightning by flying a kite with a metal key attached during a thunderstorm, and managing to harness some electrical charge. During the Enlightenment lightning came to be understood and portrayed in Faraday’s terms: an operation of nature that obeyed certain physical laws. Nevertheless many scientists and laypeople alike – including Faraday himself – continued to regard lightning as a sign of God’s power and judgement. 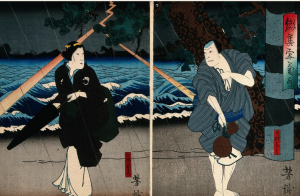 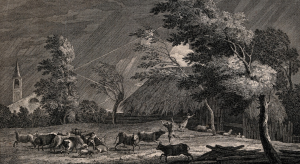 This engraving’s composition is slashed by the lightning’s diagonal forks, echoed in the bending trees and lunging figures / Wellcome Collection, Creative Commons 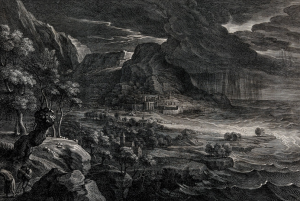 Lightning was seen as a bad omen or divine wrath in pagan and post-Classical religions / Wellcome Collection, Creative Commons 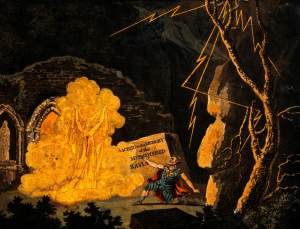 Lightning was a trope often used in the art and literature of 18th and 19th-century Gothic horror / Wellcome Collection, Creative Commons 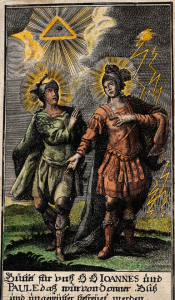 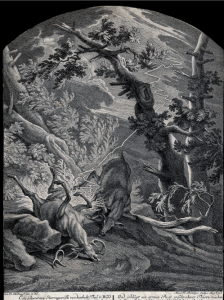 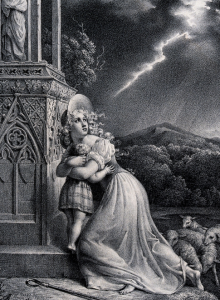 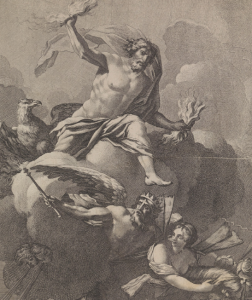 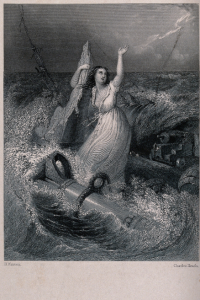 [LEFT]: The Latin lettering on this 17th-century engraving describes how the thunderbolts hurled by Jupiter ‘terrify us’ / Wellcome Collection, Creative Commons
[RIGHT]: Boats depicted on stormy seas often carried allegorical meaning about life and its dangers as well as a moral message encouraging the avoidance of sin / Wellcome Collection, Creative Commons

The English surgeon John Freke, who wrote a treatise in 1746 on the nature of electricity, stated that through electricity “you may be acquainted with the immediate officer of God Almighty”, and that it “seems to be the cause, under HIM, both of life and death”. When Robert Harrington wrote his ‘Elucidation of the Phaenomena of Electricity and Magnetism’ in 1796, his objective was the investigation of “the TRUTH, sensible that the more enlarged [Man’s] ideas of God are, the more he will venerate him”.

Scientific discoveries did not displace the conviction that electrical forces were divine. A spectrum of imaginative and emotional responses coexisted alongside rational attitudes characteristic of the age of reason. But Faraday was not alone in his disregard for them. 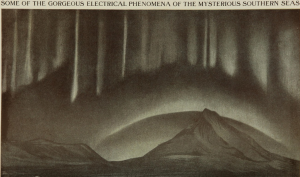 The awe of electrical phenomena is nowhere more conspicuous than in written and visual depictions of the Northern and Southern Lights / Wellcome Collection, Creative Commons 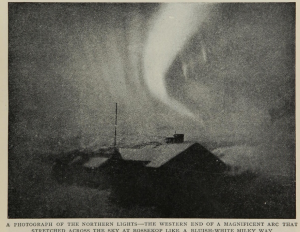 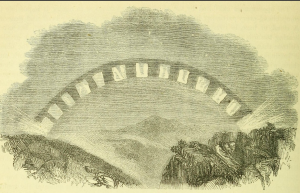 This work, written by the Reverend Thomas Milner in 1868, is infused with religious awe at the wonders of astronomy / Wellcome Collection, Creative Commons 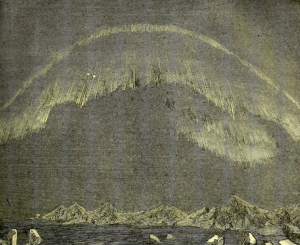 This illustration shows a display seen at Bossekop (in the west of Norway) in 1838 / Wellcome Collection, Creative Commons 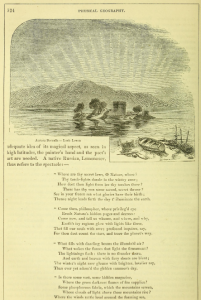 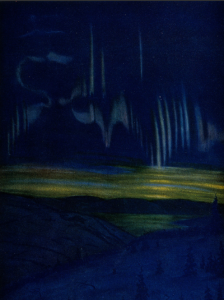 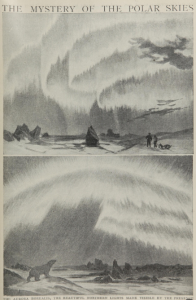 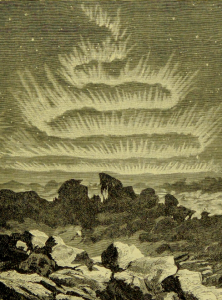 In his 1837 book on electricity, Secretary to the short-lived London Electrical Society William Leithead took scientists to task for rhapsodising and forgetting “the sober language of philosophy”. He observed that “the lecturer on electricity has generally sought rather to excite astonishment, than to satisfy or call into exercise the reasoning powers of the mind”. And yet Leithead himself was apparently not immune to this weakness. He opened his chapter on atmospheric electricity with an excerpt of ‘Summer’ by the poet James Thomson, whose expressive power was anything but rational: 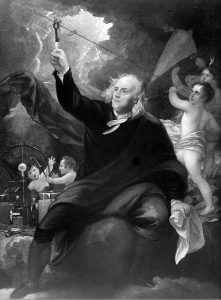 When writing about Franklin’s discoveries, Leithead effused that Franklin “had pierced the bosom of the cloud and called forth from the heavens to the earth the spirit of the storm”. Presenting Franklin as a mythical, almost superhuman idol was not uncommon. Immanuel Kant described him as “a modern Prometheus” who robbed fire from the gods to bestow on humankind. Benjamin West’s portrait of Franklin shows him in a truly divine role, astride the clouds and surrounded by angelic assistants.

Many 18th and 19th-century artistic representations of thunder, lightning and auroras reflected the sublime emotions the phenomena provoked. Depictions of tempestuous skies lacerated by bolts of lightning, often witnessed by terrified bystanders just out of danger’s reach, resounded with feelings of bewilderment, dread and awe. Poetic responses to the kaleidoscopic northern lights, which dwarfed their human witnesses with cosmic magnificence, dramatised wonder and stupefaction to a hyperbolic degree.

The wonder of electricity was not confined to atmospheric phenomena. Other natural manifestations of electricity, such as those found in the animal world, inspired curiosity and wonder, prompting scientists of the 18th century to embark on exotic adventures. Meanwhile, lay audiences’ appetite for sensational and shocking electrical displays was flourishing.