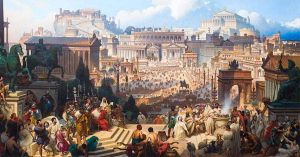 Titus Lartius was one of the leading men of the early Roman Republic, twice consul, and the first Roman dictator.

The Lartii, whose nomen is also spelled Larcius and Largius, were an Etruscan family at Rome during the early years of the Republic. Their nomen is derived from the Etruscan praenomen Lars. Titus’ brother, Spurius Lartius, was one of the heroes of the Republic, who defended the wooden bridge over the Tiber at the side of Horatius Cocles and Titus Herminius. He was also twice consul, in 501 and 498 BC.[1][2][3][4]

Lartius’ first consulship was in 501 BC, the ninth year of the Republic. His colleague was Postumus Cominius Auruncus. During their year of office, there was a disturbance at Rome, which was attributed to the actions of a group of young Sabines. Only the previous year, the consul Spurius Cassius Viscellinus had defeated the Sabines near Cures, and for a while it appeared that the war might be rekindled. Tensions were also high because it was anticipated that war with the Latins was imminent. Octavius Mamilius, the prince of Tusculum, and son-in-law of Lucius Tarquinius Superbus, the seventh and last King of Rome, was forming an alliance amongst the thirty towns of Latium, with the aim of restoring Tarquin to the throne.[5][6]

In these circumstances it was decided to appoint a single magistrate, originally called the praetor maximus or magister populi, “master of the infantry”, but afterwards known simply as the dictator, to oversee the defence of the city. The dictator held supreme authority in the exercise of his duties, and the people had no right to appeal from his decisions, as they could under the consuls. However, the command of the dictator was limited to a period of six months. The Senate directed the consuls to nominate a dictator, and Cominius chose his colleague, Lartius. The dictator then proceeded to nominate Spurius Cassius, who had triumphed over the Sabines the previous year, as his magister equitum, or “master of the horse”.[5][6][7]

The creation of this magistracy is said to have alarmed the Sabines, who sent envoys to Rome in order to avert war. The negotiations were unsuccessful, and war was declared, but both sides were reluctant to take the field, and no battle occurred. During the remainder of his office, Lartius held the census, negotiated with the various Latin towns in hopes of retaining some old allies and gaining new ones, and presided over the consular elections for the following year. He then laid down his office before the expiration of his term, setting a precedent for future dictators.[8]

He held the consulship a second time in 498 BC, with Quintus Cloelius Siculus. During this year, the long anticipated war with the Latins began. The dictator Aulus Postumius Albus led the Roman forces to victory at the Battle of Lake Regillus, while the consul Lartius captured the town of Fidenae. After leaving his magistracy, Lartius is said by Dionysius to have dedicated the temple of Saturn at the foot of the Capitoline Hill.[9][10]

In 494, Lartius unsuccessfully advocated measures to relieve the plebs from the burdens of debt; and in the following year, when the plebeians seceded from the city and encamped on Mons Sacer, Lartius was one of the envoys sent by the senate to treat with them. The embassy was successful, and resulted in the institution of the tribunes of the people.

Also in 493, Lartius served as legate to the consul Cominius, his colleague in 501, at the siege of Corioli, where Gaius Marcius Coriolanus gained fame through his valour.[11][12][13]

An alternative tradition states that the first dictator was Manius Valerius, the son of Marcus Valerius Volusus, consul in 505 BC. However, the historian Livy believed it unlikely that a man who had not yet been consul would be appointed the first dictator, or that Manius Valerius would have been nominated in place of his father. Another tradition places the institution of the dictatorship three years later, in 498 BC, during Lartius’ second consulship. In that year, Livy states that Aulus Postumius Albus was appointed dictator, and led the Roman army to victory over the Latins at the Battle of Lake Regillus. However, this battle is also placed by some authorities in 496, when Postumius was consul.