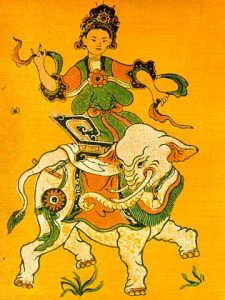 In the year 43, Vietnam came under the rule of the Chinese Han dynasty. This foreign domination was to last for hundreds of years, with the Chinese campaigning to “civilize” and assimilate the native people. Though the Chinese ruled Vietnam for hundreds of years, their rule was not accepted by the Vietnamese and there were many organized rebellions over the years. One of these rebellions was led by a legendary Vietnamese hero known as Triệu Thị Trinh.

The name Triệu Thị Trinh has a few sounds that don’t exist in English. You can probably get pretty close by pronouncing it as “Jeu Tea Gin/Chin”. It can also be translated into Chinese as Zhao Shi Zheng and in Korean Cho/Jo Sa Jung. (Thank you to Sa for commenting with a better transliteration.)

Trieu Thi Trinh, also called Lady Trieu (Bà Triệu) or Triệu Ẩu (趙嫗), was born in a small village in Vietnam. She was orphaned as a toddler and lived with her brother.

Lady Trieu saw the way her people were oppressed by the Chinese and could not take it. Trieu ran to the countryside and set up an army base, training a thousand rebels to fight against the Chinese. When her brother tried to discourage her, Trieu famously said:

“I will not resign myself to the lot of women who bow their heads and become concubines. I wish to ride the tempest, tame the waves, kill the sharks. I have no desire to take abuse.” 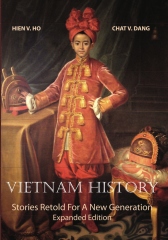 Before the age of 21, Lady Trieu successfully fought over 30 battles against the Chinese with her rebel army. According to legend she was over 9 feet tall, with a voice which sounded like a temple bell, and rode into battle on an elephant, wearing golden armor and carrying a sword in each hand. The Chinese were said to be afraid of her fierce gaze, and said it would be easier to fight a tiger than to face Lady Trieu in battle.

Lady Trieu, fighting with her small rebel army against the huge occupying Chinese forces, could not last in her success. In 248 CE, the Chinese finally won against Lady Trieu. It’s said that she despaired so much at the loss that she committed suicide by throwing herself into a river.

Even after her death, she inspired her people to fight against the Chinese. For centuries she was said to have appeared in the dreams of Vietnamese revolutionaries offering support and guidance.

Today, Lady Trieu is a national hero in Vietnam. A national holiday honors her bravery, and many streets are named after her in Vietnamese cities.