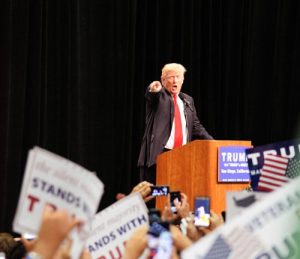 Trump points angrily at members of the news media, whom he characterized as “slime.”

Republican presidential candidate Donald J. Trump on Friday, May 27, lashed out at a San Diego federal judge presiding over a civil suit in which Trump is a defendant, and also heaped scorn upon the news media, particularly representatives of the New York Times and the Washington Post. 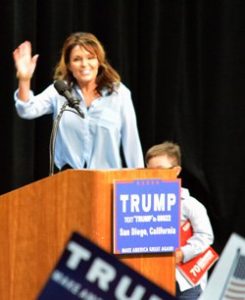 Trump’s outspoken criticism of U.S. District Court Judge Gonzalo Curiel came the same day that the judge announced he planned to rule “very soon” on a motion by the Washington Post to unseal hundreds of pages of documents in the case on the grounds that because Trump is the presidential nominee they were now a campaign issue and a matter of important public interest. [UPATE: The judge later acknowledged Trump’s criticism and ordered the documents unsealed.]

The trial on the merits of the case is set for Nov. 28 in San Diego, and Trump said he plans to be in court to win it, even if he is the U.S. President-elect.

Attorneys for plaintiffs in the law suit argue that Trump failed to disclose that Trump University was not accredited, nor did he disclose that he was not personally involved in hiring the professors who were said to be experts in their fields.

At the San Diego Convention Center on Friday, Trump angrily told his side of the case. He accused the law firm that brought the action against him of running a scam, and Judge Curiel of being a “Donald Trump hater.” He said that the university had served approximately 10,000 students who all were asked to fill out surveys rating their satisfaction on a scale of 1-5. Most, he said, gave the university scores of 4 or 5, with 5 being the top of the scale. These signed ‘report cards” he said, should have been sufficient to have the case thrown out with a summary judgment for the defense.

“I am getting railroaded by a legal system that frankly they should be ashamed of ,” Trump declared to a wall-to-wall, standing-room-only crowd at the estimated by police to be between 7,000 and 10,000.

“I could have settled this case numerous times but I don’t want to settle cases when we’re right,” he added. “I don’t believe in it. You start settling cases, you know what happens? Everybody sues you because you get known as a settler. One thing about me, I am not known as a settler.”

Describing Curiel as a “very hostile judge,” he noted that the jurist was appointed by President Barack Obama and added: “Frankly I think he should recuse himself because he has given ruling after ruling after ruling, all negative.” At another point, Trump identified Judge Curiel as “Mexican,” but quickly added he thought that was okay and that he expected more and more Mexicans would support him for President if they realized he plans to create more jobs. 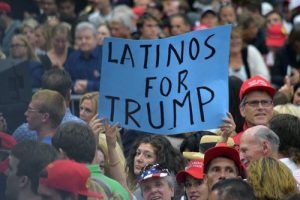 If the Trump University case goes to trial—and is not dismissed—Trump said he wants a jury trial.

Discussing another suit against Trump University filed by New York Attorney General Eric Schneiderman, Trump accused Schneiderman of accepting a campaign contribution from the law firm that is suing him, and then meeting President Obama the next day in Syracuse, New York. Following that meeting, Trump told the crowd, Schneiderman filed the lawsuit.

Turning his ire on the news media, Trump said the Washington Post has assigned 22 reporters to write a special section about him to appear in August. He said that the owner of the Washington Post—Jeff Bezos—as a former chief executive of Amazon is concerned that Internet sales may be taxed and is using his political power to try to prevent that from happening.

“In the meantime,” said Trump. “the department stores are all going out of business. There’s unfair competition. So now he’s got a threat in terms of monopoly. I am the only one who says it; the politicians are afraid to say it.”

Turning next to the New York Times, he said a Sunday front-page piece addressing his relationship to women maliciously misquoted women who competed in beauty pageants, and highlighted a complaint from a former female construction boss, who he said left his company and then wrote numerous emails to his secretary asking to come back. Her complaint, he said, was that at one time he said to her, ‘maybe you shouldn’t eat that candy’ a comment she took as an adverse comment about her weight.

“Give me a break! Our country is becoming so politically correct we are dying from within,” Trump said to cheers.

Expanding his attack to the general media, he pointed to the stand where reporters from various media outlets were required to remain and said, “These people are very dishonest; the New York Times, the Washington Post, most of the people up there. Now, some of them are fine, not too many of them. You have to fight back. When somebody hits you, you have to fight back.”

Sarah Palin clearly agreed with those sentiments. Warming up the crowd before Trump’s arrival, she complimented Trump for “not giving a flying flip about Wall Street, special interests nor political correctness nor those sheep in the media. Their heads are still spinning. What you have tried to do to Donald Trump and all of his supporters—it’s only proven that we were right. Do you know how thoroughly distrusted you are, mainstream media? Well he is now ‘We the People’s nominee, so suck it up, cupcake! Go see the pundits; they are still so very confused. I guess they did not realize that we meant what we said when we said ‘Enough! The status quo has got to go!’”

Turning to President Obama’s Asian tour, she said “stupid thinking is it is okay on Memorial Day weekend for the Democrat leader to take another U.S. apology lap – this time dissing our vets with claims of the Greatest Generation perpetuating the evil of World War II… that our troops were wrong to end a war that we didn’t start.” Instead of being at Hiroshima, Japan, this weekend, she said, President Obama should have been at Pearl Harbor. 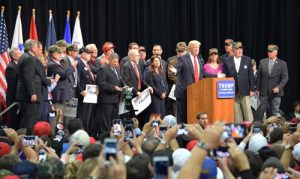 The rally was dedicated to veterans, many of whom hoisted “Veterans for Trump” signs that were distributed by the campaign staff. Pat Smith, mother of Sean Smith, a U.S. State Department official who was killed in the 2012 attack on the U.S. consulate in Benghazi, led the Pledge of Allegiance. Robert Smith (no relation) who has been blind since birth, sang the National Anthem.

Trump called up a group of veterans to stand behind him and be recognized, among them Republican U.S. Congress Members Darrell Issa and Duncan Hunter, both of whom have endorsed him. Another elected official who spoke in Trump’s behalf was Assemblywoman Melissa Melendez of Riverside County, a U.S. Navy veteran. 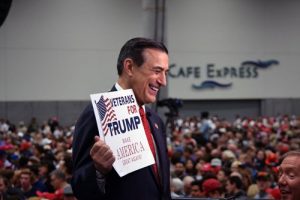 Amplifying on Trump’s demand to have Mexico build a wall to keep illegal migrants from crossing into the United States, Maria Espinoza, national director of the Remembrance Project, introduced two mothers who told of their sons being killed in traffic accidents by undocumented immigrants.

Among the thousands of attendees were Bruce Herbert, a Campo resident, who said of Trump: “He loves America and he loves the military. I think he will be good all around. He’s a well-educated man, a successful businessman, and that is what this country needs. This country needs someone to turn this country around and I think Trump is the man to do it.”

Debbie Abel of El Cajon confided that she likes Trump a lot, especially since “he sounds exactly like my father, he really does. I am originally from New York, and he has the same inflections.” Besides that, she added, “I like what he is all about. He is a no-nonsense guy and I think he will make America great again. I believe in him; I really do.”

Her friend, Tim Ashby, said Trump “seems to be for the common man. I think he is speaking my language. I want to clean up the immigration system.” 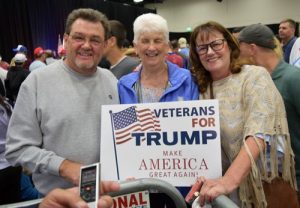 Likewise Freda Lee from Rancho Bernardo opined that Trump “is standing up for the silent majority. We’ve been told to sit down and shut up for so long, we don’t have a voice in anything. Whatever we vote for gets turned over by the Congress or whomever. Our country needs this change.

“I am a legal immigrant to this country from Northern Ireland,” she said. “So I know what it took for our family to get into our country way back when. America is not what it once was; it’s not the land of opportunity anymore. We need to get back to being that; we need to get to the top of the mountain again!” 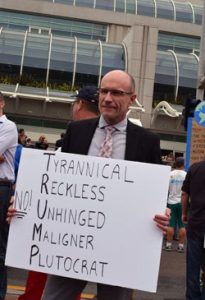 Outside the convention center, where a variety of groups protested, including those led by the Democratic party and another group, primarily of Mexican-Americans who had assembled at Chicano Park, there were greatly different ideas.
One, expressed by Democrat Robert Dillinger of San Diego, was spelled out on a sign he carried spelling out the acronym Trump. It read Tyrannical; Reckless; Unhinged; Maligner, Plutocrat.”

Of the Democratic race to oppose Trump – expected to be settled by California’s June 7 primary election—Derringer said, “I am not a fan of Hillary but I’ll hold my nose and vote for her.”

Police officers and Sheriff’s deputies were out in force in front of the Convention Center on Harbor Drive as well as inside the meeting place. There were a couple of protesters inside who were escorted out, and a reported three arrests outside during or immediately after the rally. While most attendees and protesters dispersed quickly and quietly, some lingered to taunt and shove each other and, in some cases, the police. That resulted in a reported 35 arrests.