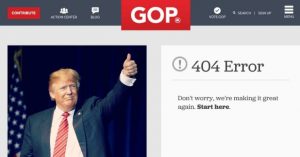 The Republican National Committee’s website, which featured President Donald Trump’s Fake News Awards, experienced an issue on Wednesday night as the results were set to be revealed. (Photo: Luisa Haynes/@wokeluisa/Twitter)

“This is what happens in dictatorships and fascist regimes. Facts, language, truth, and ultimately the press become hijacked to serve power, not question it or hold it accountable.”

Highlighting President Donald Trump’s general lack of support for the constitutionally guaranteed freedoms of speech and the press, the president’s ever-evolving animosity toward the news media culminated in his #FakeNewsAwards, which he doled out on Wednesday night via the internet—as soon as the Republican National Committee’s website issue was resolved.

The stunt—the subject of endless jokes—underscored Trump’s apparent inability and unwillingness to calmly respond to any and all criticism. Alongside the mockery, journalists and political commenters used the event to remind the public of the growing threats to free speech and press in the age of Trump.

“The purpose of any award is to create an institutionalized way of promoting a certain cause through drawing public attention,” observes Ohio State University professor Gleb Tsipursky, warning: “These awards create an institution for Trump’s relentless attacks on mainstream media and position Trump as the only voice who gets to determine truthful media.”

Other advocates for freedom shared similar observations on Twitter:

We laugh about the #FakeNewsAwards but it is in fact quite terrifying and chilling. This is what happens in dictatorships and fascist regimes. Facts, language, truth and ultimately the press become hijacked to serve power, not question it or hold it accountable.

The presidents’s #FakeNewsAwards is just the latest in a long list of attacks against our First Amendment’s freedom of the press.

After Trump announced his plan to issue Fake News Awards, the Committee to Protect Journalists (CPJ)—which tracks threats to press freedom, including cases of journalists being killed, injured, or imprisoned while on the job—trolled Trump while also highlighting the seriousness of his hostility toward journalists and media organizations by giving out awards to the world’s anti-press leaders, and honoring the president with an award for “Overall Achievement in Undermining Global Press Freedom.”

However, that’s not the case for most recipients of Trump’s awards, as Kessler noted: “At least eight of the ‘Fake News’ winners resulted in corrections, with two reports prompting suspensions or resignations. Two of the winners were simply tweets that were quickly corrected and never resulted in news articles. One was an opinion article in which the author later retracted his prediction.”