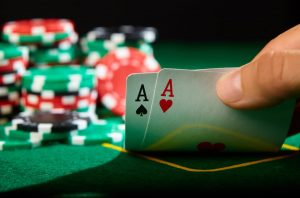 Trump had a full hand, but he may have squandered it. Happy Author/shutterstock.com

Boasting the world’s biggest and strongest economy, the U.S. has enormous leverage when it sits down with a partner to negotiate a trade deal. Threats and tariffs are not really helping.

As President Donald Trump prepares to meet with his Chinese counterpart on the sidelines of the G-20 summit on Nov. 30, the stakes could hardly be higher.

The two countries are in the middle of a trade war Trump launched earlier this year, one of the hardball negotiating strategies he believes can extract more benefits from trading partners. Such “economic bullying” was blamed for creating a first-ever deadlock at a recent Asia-Pacific Economic Cooperation meeting.

So far, China shows few signs of budging in the face of mounting tariffs. Could Trump’s tough talk work? Or will it backfire on him and the Americans he represents?

Exhibit A for those who believe such tactics are effective is the United States Mexico Canada Agreement, negotiated to replace NAFTA. Trump used threats, humiliation and punishing tariffs to get Canada and Mexico to agree to the new deal.

Supporters argue this shows his brand of bluster works. And that this strategy will help the U.S. win its trade war with China and get the better of the EU.

But even without the taunting tweets, Trump already has enormous leverage going into any trade negotiation, whether with Canada and Mexico, China or the EU. That’s because, as my own research has shown, boasting the world’s largest and strongest economy puts the U.S. in a unique position to extract concessions from its partners.

Yet, despite this advantage and the blustery rhetoric, Trump hasn’t actually achieved all that much. And in negotiations with China, he may have already squandered some of his biggest chips.

The US always has a strong hand

And empirical work by economists Rod Ludema and Anna Maria Mayda shows countries like the U.S. with greater exporting power tend to get more market access during bilateral negotiations. 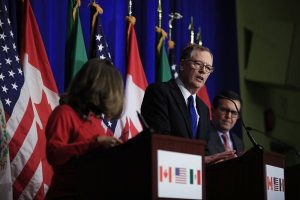 Trump’s supporters argue that the new NAFTA deal with Canada and Mexico gives him a leg up. AP Photo/Manuel Balce Ceneta

But, rather than focusing on playing the strong hand he was dealt, the president threatened to burn the house down.

For example, he’s been threatening to withdraw from NAFTA since the 2016 U.S. presidential campaign and repeatedly tried to use his apparent eagerness to rip it up as a way to force Canada and Mexico to the negotiating table.

He also imposed steep tariffs on steel and aluminum – new levies that adversely affect Canada and Mexico much more than China. They’ve also hurt American carmakers, playing a part in General Motor’s plan to close up to five plants in North America and lay off more than 14,000 workers.

Yet Trump used these steel and aluminum tariffs – as well as the specter of new and severe auto tariffs – to back Canada and Mexico into a corner, even though both are key allies.

Furthermore, after reaching a separate deal with Mexico in August, Trump used it to put even more pressure on Canada by threatening to exclude America’s northern neighbor if it didn’t agree to their terms.

And after all this, did he get “the most important trade deal we’ve ever made, by far,” as he claimed? Not quite.

In fact, U.S. gains in the United States-Canada-Mexico Agreement are modest at best, even in the three areas most touted as wins.

While it’s true that U.S. dairy producers now have better access to the Canadian market, the Federal Reserve Banks of Minneapolis and Chicago predict little benefit. The increased market access is small. And U.S. dairy farmers are still facing tariffs from Mexico and Canada as retaliation for Trump’s metal tariffs.

Mexico’s promise of passing laws strengthening labor unions and worker rights also has little value for the U.S. Although these laws should reduce the extent to which Mexican workers are low-wage substitutes for U.S. workers, the new deal doesn’t spell out enforcement. So, like the old NAFTA, these are unenforceable promises by Mexico.

Finally, the U.S. did manage to get its way on a rule requiring a zero-tariff car coming from Mexico to have at least 30 percent of the work done by employees earning at least US$16 an hour – three times the typical Mexican autoworker wage. Some argue this will create more high-wage auto jobs in the U.S.

Good news for American autoworkers right? Wrong. The penalty tariff for missing this mark is just 2.5 percent. Rather than shifting lots of labor back to the U.S., car companies will simply pay the tariff. 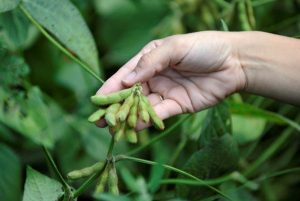 Interestingly, the U.S. has even more leverage with China because most of its allies, such as the EU, agree with its concerns over intellectual property theft and a lack of market access. They would have joined a coordinated effort to push China to change its ways.

But once again, rather than playing this already strong hand, Trump doubled down on go-it-alone confrontation by piling on the tariffs, which now cover more than half of U.S. imports from China.

And he’s repeatedly threatened to go for broke and slap tariffs on all imports from China.

What has this achieved? A tit for tat, full-blown trade war, in which each Trump salvo is greeted by retaliation. This retaliation has pummeled U.S. farmers: Over 90 percent of U.S. agricultural exports to China are now subject to tariffs. Although the Trump administration has promised billions in tariff relief to farmers, many say it won’t be enough to offset the losses.

Putting aside China’s slapping of the U.S. with retaliation, possible concessions outlined by China don’t amount to much. They include offers of helping reduce the bilateral trade deficit – even though economists say they don’t matter – and other modest changes.

Moreover, Trump already gave up the ace in the hole that could have helped achieve so many of his goals: the Trans-Pacific Partnership.

Because the TPP would have been the largest trade deal ever and included so many of its Pacific neighbors, China would most likely have eventually joined. That would have resulted in more market access for American companies in China and forced China to abide by rules essentially written by the U.S., the dominant economic superpower in the deal.

Alas, one of Trump’s first official acts as president was to withdraw from the TPP.

How to play a winning hand 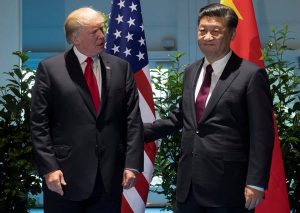 Trump’s best move now on China is to focus on cooperating with the EU and Japan. Uniting as a massive trading bloc is the best way to extract concessions from China.

And while early rumors of a possible truce in the trade war are encouraging, the EU and Japan will only take part if they believe Trump is serious about cooperating with them and negotiating with China. That belief has surely been dented by Trump’s negotiating tactics.

The U.S. doesn’t have to keep threatening to burn down the house to get a good deal. The U.S. only has to play the cards it’s been dealt, which is typically a winning hand.