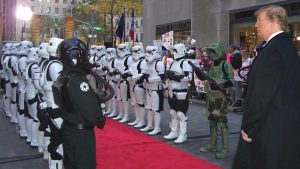 Trump’s proposed “Space Force” could set off a race to weaponize space and make billions for defense and aerospace contractors. / Creative Commons

Trump is calling for the creation of a new Space Force as a sixth branch of the U.S. military, to militarize the heavens. 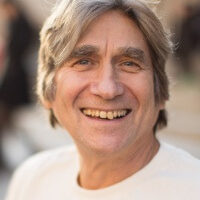 The Commander-in-Chief, President Donald Trump, has announced a new mission into the realm of martial excess. It is one is that will surely enrich the aerospace industry while spreading the global battlefield to a new dimension.

Trump is calling for the creation of a new Space Force as a sixth branch of the U.S. military, to militarize the heavens.

“It is not enough to merely have an American presence in space,” Trump told a meeting of the National Space Council in mid-June. “We must have American dominance in space.”

To this end, the president has taken a page from Ronald Reagan’s Star Wars playbook. Reagan’s scheme, according to a recent article by Karl Grossman, was built around “nuclear reactors and plutonium systems on orbiting battle platforms providing the power for hypervelocity guns, particle beams, and laser weapons.”

Grossman, a journalism professor at State University of New York/College at Old Westbury and author of the book The Wrong Stuff: The Space Program’s Nuclear Threat to Our Planet, has been reporting on the militarization of space for decades, says the move will likely spur a new international competition to weaponize space.

In an interview, Grossman told me that “the Russians and Chinese are hesitant because of the high cost. But if the Americans proceed with this, all bets are off. They’re not going to sit for it. They’re going to get up there before you know it.”

“It will all be nuclear,” Grossman adds. “It’s the ultimate nightmare.”

Trump’s move contradicts the letter and spirit of the Outer Space Treaty of 1967, which was won after years of epic negotiations, mostly during the Vietnam War. The landmark United Nations accord brought the Soviet Union, China, the United States, and 120 other nations together in a monumental agreement to designate space as a global commons, reserved for peaceful purposes.

“States Parties to the Treaty undertake not to place in orbit around the Earth any objects carrying nuclear weapons or any other kinds of weapons of mass destruction, install such weapons on celestial bodies, or station such weapons in outer space in any other manner,” the treaty states. 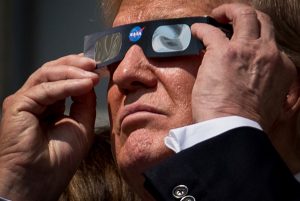 The proposal for a Space Corps as part of the Air Force could likely pass in the House but faces a tougher going in the Senate.

“There’s a lot of resistance to this,” says Grossman, “because a lot of the current work is located in Colorado Springs, and in Huntsville, Alabama. So there’s geographical lobbying from the Pentagon because they thought a new Space Corps might be competition to some of the vested interest in those towns.”

“It’s hard to know how much this would cost,” says Grossman. An article in Roll Call has estimated “$500 billion or more in the coming decade.”

“The real cost will depend on how greedy the aerospace companies are,” Grossman says. “So much of space is now private business, with [Tesla’s] Elon Musk and [Amazon’s Jeff] Bezos and all kind of companies talking about making a buck out there.”

Rep. Trent Franks, R-Ariz., seems to agree, telling Roll Call that “a big payday is coming for programs aimed at developing weapons that can be deployed in space.”

According to Franks, “It was a Democrat mindset that caused us to step back from space-based defense assets to ostensibly not ‘weaponize space,’ while our enemies proceeded to do just that, and now, we find ourselves in a grave deficit. In every area of warfare, within the Geneva Conventions, America should be second to none. That includes satellite warfare if it’s necessary. We cannot be victims of our own decency here.”

The 1967 Outer Space Treaty was the result of worldwide recognition that war is incredibly costly in terms of lives and resources—and that more needed to be done.

“The U.S. led the effort to de-weaponize space in the wake of Sputnik,” says Grossman. “I was told by Craig Eisendrath of the State Department that the U.S. feared the Soviet presence in space. As a model, they used the Antarctic Treaty, which banned weapons down there.”

Since the mid-1980s, key players at the United Nations have tried to expand the ’67 accord. The Prevention of an Arms Race in Outer Space Treaty, proposed in 1985, would have banned from space all weapons, nuclear and otherwise. Canada, China, and the Soviet Union (and then Russia) all pushed hard for its ratification. But no American president has been willing to sign it. The United Nations committee working on it was dissolved in 1994. In 2008, China and Russia submitted an updated draft to the U.N. General Assembly which the United States alone has continued to oppose (Israel has abstained). Even Putin, at their infamous Helsinki press conference, chided Trump about it.

Now Trump is heading where no president since Reagan has gone before. “My new national strategy for space recognizes that space is a warfighting domain, just like the land, air, and sea,” he says.

“Trump’s plan, like Reagan’s, involves laser beams, particle beams, and hypervelocity guns, all of which will have to involve nuclear power,” says Grossman. “If there’s a shooting war it will be Chernobyls and Fukushimas in the sky. Some of it will come down, which will be catastrophic. And some will take millennia to fall, which means the heavens are going to be littered with radioactive debris.”

As Grossman sees it, “Of all the many, many terrible things the Trump Administration is doing, opening space to war will be the most destructive.”