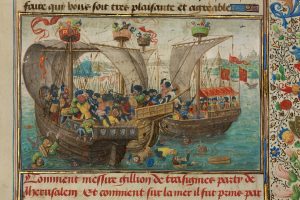 We’ve shared our enthusiasm for a very special illuminated manuscript in print, on social media, and now with a Drunk History–inspired video (yes really)

In 2013 the J. Paul Getty Museum acquired a magnificent copy of the Romance of Gillion de Trazegnies, now Ms. 111 in the Getty’s collection. In the Manuscripts Department, we’ve long been interested in experiments to engage diverse audiences with our collection. As senior curator of the collection and a specialist in Flemish illumination of that era (Elizabeth), I was particularly eager to share the Romance of Gillion with our many audiences—fellow scholars, enthusiasts of art and the Middle Ages, visitors to the Getty—in efforts ranging from a print publication to a delightfully fun YouTube video. Here’s what we did and why.

About the Romance of Gillion Manuscript

Part travelogue, part romance, and part epic, the text of the Romance of Gillion de Trazegnies traces the exciting exploits of a knight named Gillion as he journeys to Jerusalem on pilgrimage, is imprisoned in Egypt and rises to the command of the Sultan’s armies, mistakenly becomes a bigamist when he marries a Muslim wife while still married to his Christian spouse, and dies in battle as a glorious hero. The tale encompasses the most thrilling elements of the Western romance genre—love, war, treason, and loyalty—set against the backdrop of the East. The accompanying illuminations, created by Lieven van Lathem, one of the greatest artists active in Flanders in the fifteenth century, vividly interpret the text, serving as a visual gloss that heightens the reader’s experience of the manuscript.

Since its acquisition, the book has been on view three separate times in exhibitions at the Getty Center, allowing us to share with visitors five examples of its lavish illuminations. (In two of the exhibitions, we turned pages midway through to reveal new parts of the story.) Earlier this year it was on view in Traversing the Globe through Illuminated Manuscripts, appropriate given Gillion’s travels between Europe and the Middle East.

Almost immediately after the acquisition, I conceived of the idea to write a book about the text and its illustrations to make them accessible in detail not only to scholars, but also to anyone interested in art, manuscripts, or the Middle Ages. I was delighted to be able to engage the perfect co-author for the book, professor Zrinka Stahuljak of UCLA’s French and Comparative Literature Departments. Just as I have spent many years in the study of the art of the fifteenth century in Flanders, professor Stahuljak is equally well-versed in the language and literature of the period.

It was an ideal collaboration that stretched almost three years while we researched, wrote, and saw the book through to publication. Along the way, our excitement for the project was only exceeded by our passion for the manuscript itself. We became more and more absorbed by the problems and questions posed by the manuscript’s text and illumination, much to our mutual enjoyment. In our monthly meetings, we exchanged ideas, endlessly discussed the thorny aspects of dating, attribution, and textual development. We also traveled together multiple times to see related manuscripts and consider the place of this masterpiece within the greater context of productions of the period. We studied manuscripts across Europe, from Berlin and Paris to London and Brussels. Along the way, we often felt that we were vicariously sharing in the sense of adventure and humor integral to Gillion’s story as we forged ahead on the project. The result, happily, is a book that reflects our interests and the great knowledge we gained from each other. 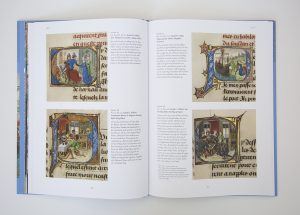 A lovely spread from our book The Adventures of Gillion de Trazegnies: Chivalry and Romance in the Medieval East, from Getty Publications

While we were writing the book, Gillion was also busy making multiple appearances on the Getty’s digital media to further engage scholars and art enthusiasts alike. My colleagues and I blogged multiple times about the manuscript and its illuminations here on The Iris, and Zrinka read elegantly from the original Middle French for our Medieval Manuscripts Alive audio series, evoking how the story would have originally sounded when read aloud.

We told the knight’s story in cliffhanger mode over the course of a week on Facebook—and later did it again, this time in greater depth on Tumblr, inspired by the podcast Serial. Images from the manuscript likewise made an occasional appearance in our series #ThyCaptionBe, also on Tumblr, in which we asked you to come up with creative captions for a detail selected from a manuscript in the collection, revealing later what was really happening.

We were delighted with the response to these posts, as well as to the published book. Combining scholarship and play, we wanted to continue to share with you both the excitement of Gillion’s story and the fun we had together while discovering more about it by writing the book. Enter the idea for “Tipsy Medievalists.”

We teamed up with a creative pair of colleagues from the Getty’s publications and communications teams, Miranda Sklaroff and Sarah Waldorf, to devise ideas for a book trailer. Making a video about a book about another book gave us a lot of creative ideas. We wanted to craft a video that would publicize the book (and the manuscript) by reflecting the elements that had so entranced us: fun, delight, originality, and a sense of adventure.

We decided on a concept loosely inspired by the hugely successful series on Comedy Central, Drunk History. The exciting and dramatic story of Gillion de Trazegnies combined with the enjoyment that we found in working on the project together seemed an ideal match to the sensibility of the series. Naturally, we didn’t plan to drink ourselves into a stupor while trying to recount the story (one of us prefers Diet Coke to red wine anyway), but rather to toast the completion of the book with an evening of fun and celebration. The idea of “Tipsy Medievalists” was born.

The big reveal as Elizabeth (right) shows Zrinka (left) the published book for the first time.

The episode was filmed in my (Elizabeth’s) home, complete with my rescue dog (be sure not to miss her cameo at the end). Sarah and Miranda mixed up a batch of sangria and directed the videographer, while Zrinka took her first Uber to my house so she wouldn’t have to drive home. At first, we felt a bit awkward, but soon the clever questions devised by the team inspired wit and animation.

Things really got going when we donned the outfits of Gillion and his first wife. (It’s perhaps not surprising that a medievalist has a few good knight and princess costumes in her Halloween collection.) Then, there was no stopping us. We decided to act out our favorite scene from the manuscript, where Gillion’s first wife Marie confronts him over having married a second wife. We had often discussed the uncomfortable position of Gillion and imagined what the feelings of both husband and wife would have been, and we finally got to act it out. Although our dialogue does not precisely reflect the manuscript’s actual words, we think you’ll still get the idea.

“Tipsy Medievalists” is an experiment—the Getty haven’t previously done anything like it. We hope you enjoy watching it as much as we enjoyed working on it, and maybe it will even inspire you to buy the book (please do!). We think the video is hilarious, and if you do too, who knows? Maybe Comedy Central will create an art history spinoff!