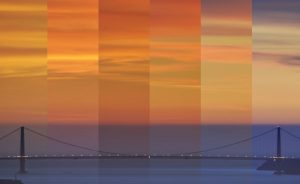 Can the arts be a bridge to other worlds? Daniel Parks, CC BY-NC

Is a novella published 130 years ago our best bet for explaining the worlds of 4D and beyond? 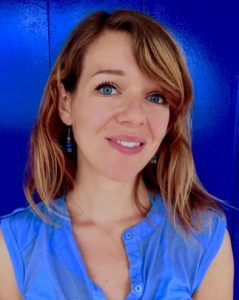 Sometimes, the hardest job for a theoretical physicist is telling the story. The work in this field can be conducted entirely in the abstract, leaving outsiders (and the odd insider) bewildered, but there might be some assistance in the visualisation techniques developed by certain artists and writers. Cutting-edge theories are often motivated by aesthetics and simplicity, after all, and so the idea of a synergy between artists and scientists does not seem all that far-fetched. One clear example where the combination can work comes in the exploration and understanding of extra dimensions.

You may have heard that scientists often talk of these “other worlds”, but (hopefully), your everyday reality takes place in three dimensions of space, and one dimension of time. Physicists marry together these dimensions because of Albert Einstein’s special theory of relativity; it enables us to describe a point in (1+3) dimensions of (time+space) with four coordinates: (t, x, y, z). But from an abstract point of view, it makes a lot of sense to then ask: why just four? And in fact, many theories in physics can easily be formulated without being too specific about the number of dimensions. We can call it 1+D instead and open up the the possibility of more than three spatial dimensions: (t, x, y, z….).

But that’s where it gets hard, of course. Extra spatial dimensions are very hard to imagine, and even the scientists working with them (such as myself) have a hard time visualising them. Now, this in itself is not proof that they do not exist. We also find it hard to imagine infinities, for instance, and super-positions of quantum mechanical states, but both these concepts are seen in nature.

Physicists have of course come up with tests which allow for the existence of other dimensions, but the trouble is that this delivers results which imply we’re happily bumping along with the ones we’re all very familiar with.

But before concluding that this invalidates the whole discussion about more dimensions already, there are ways to get around this result. We already knew that the new dimensions would have to be very different from the ones we experience – otherwise we would be able to see them. In much the same way they may not show up in those tests which use force laws. They may be very small, for instance, and folded away to make them invisible to us. Size and energy are inversely related in particle theories, so the smaller the dimensions are, the less likely it is that we will be able to probe them directly.

A popular example of how this works is by an ant on a piece of rope. From far away, the piece of rope seems one-dimensional, but only when you zoom in you can see that in the ant’s world the surface it sits on is really 2D. 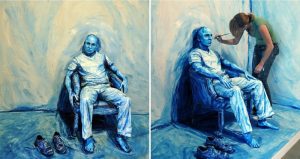 Our ability to perceive even our own dimensions can be flawed. Alexa Meade

This limited ability to perceive dimensions even in our familiar world can be seen in the work of artist Alexa Meade, who paints 3D installations and renders them 2D to our primitive eyes. And to start visualising extra dimensions instead, scientists may also take inspiration from the arts.

A good starting point is to turn the question on its head: in the 1884 novella Flatland EA Abbott wrote about creatures living in fewer dimensions, instead of more. The creatures of his 2D world experienced 3D through cross sections of objects passing through. An illustration from the book appears below.

Flatland, A Romance of Many Dimensions, EA Abbott

In exactly the same way we may use a computer to show what a cross section of a 4D image would look like in 3D, or in 2D. A 4D cube (a hypercube) may for instance be represented with this slicing method:

Interestingly, both are slices of the same object, but in the top set of images the slicing was started on a corner, and in the second one with a square.

EA Abbott wrote about slicing, but there may have been another way in which his flat creatures observed the 3D sphere. If the 3D sun had shone over it, a shadow would have been cast over the plane: this defines the linear perspective method. It has a foundation in ancient Greece, and modern artists still follow the techniques developed by Renaissance architect Filippo Brunelleschi, perhaps most famous for building the gigantic dome of on Florence cathedral. Jean-François Colonna has some great examples of extra dimensional objects created using the perspective method which have all the trappings of abstract art. 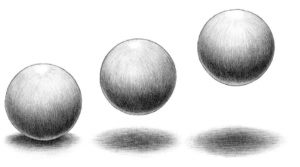 In the same way that the light from our sun casts shadows on 2D surfaces, that is, in parallel lines, we may consider a hypothetical 4D sun which casts a shadow of a 4D object onto our 3D world. This is hard to visualise, but easy to program on a computer. A hypercube would then look like this: 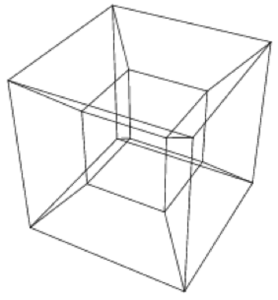 This is called a Schlegel diagram. Perhaps it is not immediately obvious how this is related to a shadow, but considering its contour lines may help.

Difficulties with visualizing physical theories have never proved to be a valid basis for their rejection, but they have been an obstacle to understanding. The techniques developed for visualizing extra dimensions form a good example of how physicists may borrow and extrapolate techniques developed in the arts world, and how interdisciplinary collaborations may be beneficial to both fields.