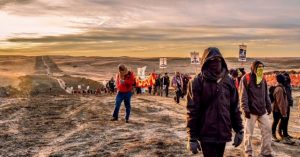 There will continue to be resistance, people putting their actual bodies on the line, because this is such a larger issue,” said Tara Houska, national campaigns director for Honor the Earth. “We’re fighting for future generations.” (Photo via Sacred Stone Camp)

Undeterred by the escalating attacks on protesters by local law enforcement officials, the native movement to halt the Dakota Access Pipeline (DAPL) has fired back with a new frontline camp, which they have reclaimed through eminent domain, and a new resolve to “stand and face the storm.”

One day after North Dakota police maced and arrested dozens of peaceful water protectors, the Sacred Stone Camp released a statement on Sunday announcing that the Standing Rock Sioux and allied tribes have erected a new winter camp, currently comprised of several structures and tipis, on Dakota Access property, which they said was “unceded territory affirmed in the 1851 Treaty of Ft. Laramie.”

“We have never ceded this land,” declared Joye Braun, an organizer with the Indigenous Environmental Network. “If DAPL can go through and claim eminent domain on landowners and Native peoples on their own land, then we as sovereign nations can then declare eminent domain on our own aboriginal homeland.”

Ladonna Bravebull Allard with the Sacred Stone Camp added: “We stand for the water, we stand on our treaties, we stand for unci maka—we stand and face the storm.”

Appearing on Democracy Now! Monday, Couchiching First Nation member and national campaigns director for Honor the Earth Tara Houska explained that since a U.S. federal court of appeals ruled against the tribes’ request for an injunction, pipeline company Energy Transfer Partners is now “moving at an incredible pace to try and get this pipeline into the ground.”

And with the new camp located on the final three miles of the proposed route, just two miles east of active construction, Houska predicted that “the interactions will continue between water protectors, and the police. There will continue to be resistance […] people putting their actual bodies on the line, because this is such a larger issue.”

But North Dakota officials, from local law enforcement to Republican Governor Jack Dalrymple, have also made it clear that this is a fight from which they are not backing down from.

Responding to a question from Democracy Now! host Amy Goodman about the escalating charges against the demonstrators—which have grown from disorderly conduct to criminal trespass to now riot—Houska said she thinks “they’re looking to scare folks off. They’re also looking to drain resources,” as they can “increase the amount of bail for each individual arrested.”

Meanwhile, DAPL opponents in Iowa who live near where it would cross the Mississippi River are currently blocking the access road to an essential drilling waste storage site, shutting down construction for at least two days.

In an early Monday update, activists with the campaign Mississippi Stand wrote :

It’s been confirmed this morning that the drill is not operating—we have indefinitely halted the Black Snake at the Mississippi Stand! This slurry site is crucial to their operations and we continue to occupy the dump site and have for nearly 24 hours. This is a call to action. We need reinforcements to defend the space as soon as possible! This is the time for MASS MOBILIZATION!

Watch the Democracy Now! segment below: