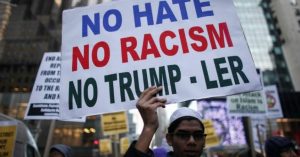 “Racism has been an essential part of the Republican playbook for decades. Elected over and over as defenders of white working people’s “way of life,” the GOP has reliably used its political power to make its rich donors richer.”(Photo: Getty)

Blaming the hard times suffered by struggling whites on “underserving” people of color – is as old as America. 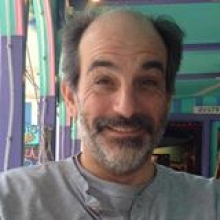 The Trump administration has been guided and energized by two defining projects: (1) the further enrichment of the 1% and (2) the vilification, disempowerment and dehumanization of people of color.  Indeed, these are among the Trump Administration’s most important “accomplishments.”

These two projects are, alas, powerfully and deeply interdependent.  The racist narrative of Trump, his administration, and the Right has facilitated the enrichment of the rich – as it so often does. This is true in at least two ways: (a) this narrative has reinforced racial divisions in the working class, and thus undermined workers’ political and economic bargaining power and (b) it has provided for Trump’s “base” an economic narrative that casts white workers as victims – not of rapacious capitalists and a weakened welfare state but, rather, of “reverse racism” and an “infestation” of their world by immigrants and other people of color.

None of this is new.  Racism has been an essential part of the Republican playbook for decades. Elected over and over as defenders of white working people’s “way of life,” the GOP has reliably used its political power to make its rich donors richer.  And Democrats have, too often, happily played along.

First, a little bit of recent US economic history.  Among the world’s rich countries, the US is the most unequal, and it has gotten more unequal over time. Since 1980, the incomes of the top 1% have nearly tripled, and the incomes of the top 0.1% (those earning over $2 million per year) have quadrupled.  In 1965, the average CEO took home 20 times more than their average employee.  In 2016, this ratio was 270.  Corporate profits are at an all-time high.  Meanwhile, the real income of the median household in the US has barely budged, and the real pre-tax income of the bottom 20% has fallen by 25%, even as labor productivity (the market value of worker output per hour) has grown by 75%.  White men with a high school education or less saw their real incomes fall by 9% between 1996 and 2014.

While inequality has soared, the Republican Party’s economic policy agenda has not changed for decades: tax cuts for corporations and the one percent; reduced corporate accountability (“deregulation”); privatization, and the disempowerment of working people and the poor.  Indeed, the GOP’s success in imposing this agenda on us — especially during the Reagan and George W. Bush years — is an important reason for increasing economic inequality and economic insecurity in the US over the past 40 years. The Trump administration has happily embraced this agenda, as evidenced by its massive corporate tax cut in December, and its enthusiastic efforts to further liberate corporations from regulation and accountability.

The story of rising economic inequality in the US is reasonably simple and, one would think, fairly transparent.  The rich have gotten richer, and the rest of us – especially the working class and the poor – are struggling.  The lost income of workers of all sorts—union and non-union, Black, brown and white, male and female, public sector and private sector—can be found in the pockets of the one percent.  And the Republican Party has, for decades, dutifully and skillfully facilitated this process.

On the other hand, Republicans have reliably won the of votes of white working class voters – even as the they have relentlessly pursued an agenda that undermines white workers’ incomes, educational and economic opportunities, access to health care, mobility, and economic security.

The GOP has facilitated a massive upward redistribution of income and wealth with its tax policies, its opposition to minimum wage increases, its attacks on public sector unions, the disempowerment of the NLRB, OSHA and other institutions designed to protect workers, and a parade anti-labor legislation and anti-labor rulings by the Supreme Court’s conservative majority.  The GOP agenda has included attacks on the Affordable Care Act (ACA), Supplemental Nutrition Assistance Program (SNAP or “food stamps”), unemployment benefits and Medicaid, and regular declarations that we “can’t afford” Social Security and Medicare.  All of this, of course, is bad for working people.  And yet, in 2016, 66% of white voters without a college degree voted for Trump (29% voted for Hillary Clinton).  Democratic candidates Obama, Kerry and Gore each lost the white working class by double digits.

Federal anti-poverty programs benefit millions of white working class households.  In 2014, there were 58 million “white households” in the US in which no household member had bachelor’s degree. Among these households, 14 million (24%) would have been in poverty without government assistance.  The Center for Budget and Policy Priorities estimates that government programs lift nearly half of these households (over 6 million) out of poverty.  The ACA facilitated health insurance coverage for about 16 million Americans, about half of them white.  In 2016, despite these gains in coverage, 28 million Americans, including 12 million whites, had no health insurance.  17 states – each with a Republican governor — have refused to accept a federal funded expansion of Medicaid coverage.  The Kaiser Family Fund estimates that this has left 2 million Americans uninsured (more than half of them white). Over 20 million US households (and more than 40 million people) “participate” in SNAP (“food stamps”).  About half of these beneficiaries are white.

The GOP (including Trump, for sure) has, for decades, offered two economic narratives: one for donors, and one for “the base.”  These narratives are at once lousy economic theory, and clever politics.

The big donors get the truth.  We’ll cut taxes, we’ll subsidize you, we’ll disempower your workers, we’ll limit the ability of communities, consumers, the poor, and other prospective adversaries to hold you accountable, we will liberate you to buy all of the political favors you need, and we will get the state off your back. More than this, we will staff regulatory agencies with people who have your profits as their guiding light.  And if we’ve forgotten anything, just call your congressman.

To “the base,” Trump, and the GOP, and Fox News, and right wing think tanks offer a very different political-economic narrative. The game is rigged.  Washington’s “liberal elites” are using your tax dollars to buy the votes of undeserving “takers” – at your expense.  For you “regular Americans” the price of this liberal plunder has been fewer good jobs, declining wages, fading opportunity, disrespect, and waning hope.  The underserving winners – championed by advocates of diversity, political correctness and reverse racism — are “illegal immigrants,” “welfare queens,” food stamp recipients, and those who have “cut the line” (in labor markets and college admissions) thanks to “quotas” and “special preferences.” Free-loaders of color.  And further, lousy trade deals have sent “your jobs” to Mexico and China.

Trump’s “economic policy” follows logically from this “economic model.”  Build a wall.  Deport “illegal immigrants.”  Tear up trade deals.  Stop using US tax dollars to subsidize ungrateful foreigners.  Cut “welfare.” End “special preferences.”  “Drain the swamp” of smarmy elites, who tax us, give “our” money to lazy people of color, and then (with the help of fake news and leftist college professors) blame “hard working people” and “real Americans” for the failures of Black and brown people.

This essential narrative is not new.  Ronald Reagan derided “welfare queens” and “strapping bucks eating T-Bone steaks.”  Racist pandering was at the heart of Nixon’s “Southern Strategy.”  Indeed, this strategy – blaming the hard times suffered by struggling whites on “underserving” people of color – is as old as America.

This narrative is racist, and – as economic analysis – it is disingenuous and stupid.  As politics, it is, alas, reliably effective.  A 2017 Harvard/NPR/Robert Wood Johnson Foundation poll found that 55% of white Americans believe that they are victims of racial discrimination.  31% of Trump supporters said they “strongly agree” that “social policies, such as affirmative action, discriminate unfairly against white people.”  40 percent of Trump supporters described African Americans as “lazier” than whites.  33% said that African Americans were “less intelligent” than whites.  Nearly half of Trump’s supporters described African Americans as more “violent” than whites, and half described African Americans as more “criminal” than whites.  In an article reporting on this poll for Reuters, Emily Flitter and Chris Kahn reassure us that it could be worse. “Not all Trump supporters expressed negative attitudes about blacks. No more than 50 percent of his supporters rated blacks negatively, relative to whites, on any of the six character traits in the poll.”  In 2015, The Kaiser Family Foundation asked a sample of Americans to estimate the share of US government spending that goes to foreign aid.  The average estimate was 26%.  In fact, foreign aid accounts for less than 1% of US government spending.  56% said they think the US spends “too much” on foreign aid.

I don’t know what’s in the heads of Trump’s working class voters.  Why do they vote for candidates who reliably undermine their economic well-being?  Two related hypotheses come to mind.  Maybe they believe – foolishly — that Trump’s “economic policies” (a border wall, the repeal of the ACA, and tax cuts for the rich) will make them richer and more economically secure.  Or, perhaps, the “psychological wage” of whiteness, to borrow a phrase from the great W.E.B. Dubois, is so great that it’s worth the economic price.  Or maybe both.

While the Trump administration vilifies immigrants and goes after the last remnants of affirmative action, and while “the base” chants “build that wall,” the rich are getting richer.