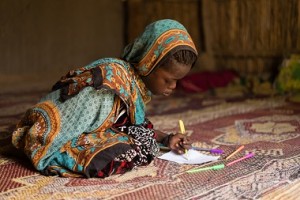 Salta Bintou Hassan is 11. She lost her arm after an suicide attack on Bagasola market in October 2015. After spending two months in the hospital of N’Djamena, she is back with her family. Yet, her life will never be the same.

The number of children involved in ‘suicide’ attacks in Nigeria, Cameroon, Chad and Niger has risen sharply over the past year, from 4 in 2014 to 44 in 2015, according to a UNICEF report released today. More than 75 per cent of the children involved in the attacks are girls.

“Let us be clear: these children are victims, not perpetrators,” said Manuel Fontaine, UNICEF Regional Director for West and Central Africa. “Deceiving children and forcing them to carry out deadly acts has been one of the most horrific aspects of the violence in Nigeria and in neighbouring countries.”

Released two years after the abduction of over 200 schoolgirls in Chibok, the report, Beyond Chibok, shows alarming trends in four countries affected by Boko Haram over the past two years:

The calculated use of children who may have been coerced into carrying bombs, has created an atmosphere of fear and suspicion that has devastating consequences for girls who have survived captivity and sexual violence by Boko Haram in North East Nigeria.

Children who escaped from, or were released by, armed groups are often seen as potential security threats, as shown in recent research by UNICEF and International Alert. Children born as a result of sexual violence also encounter stigma and discrimination in their villages, host communities, and in camps for internally displaced persons.

“As ‘suicide’ attacks involving children become commonplace, some communities are starting to see children as threats to their safety,” said Fontaine. “This suspicion towards children can have destructive consequences; how can a community rebuild itself when it is casting out its own sisters, daughters and mothers?”

Beyond Chibok assesses the impact conflict has had on children in the four countries affected by Boko Haram. The report notes that:

UNICEF is working with communities and families in Nigeria, Chad, Cameroon and Niger to fight stigma against survivors of sexual violence and to build a protective environment for former abductees.

The response to this crisis remains severely underfunded. This year, only 11 per cent of the US$97 million needed for UNICEF’s humanitarian response has been received. UNICEF is calling for increased commitment from donors to support conflict affected children and women in Nigeria, Niger, Cameroon and Chad.