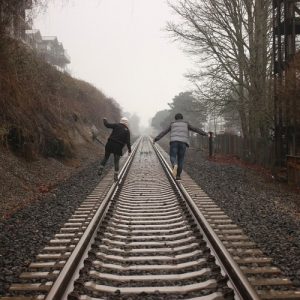 Photo by Unsplash (courtesy of Pixabay.com)

When the fireworks in the Senate Square in Helsinki announced the beginning of 2015, they also marked the start of a special year for the adjoining University of Helsinki: its 375th anniversary. Though this jubilee per se might not seem to be a particularly significant, it became one. Many happenings have been linked to the occasion. However, in spite of a variety of events, not many occurrences have left such an impact on the university’s immediate environment as the renaming of a Helsinki metro station. 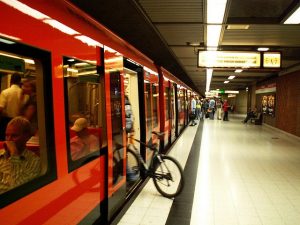 I have already written partially about one particular repercussion that occurred: a dispute brought up when a discount retail store (located in the metro station) was about to change its name to the University of Helsinki’s Tokmanni. I am developing now that story further by tracing its echo through 3 ethnographic snapshots, chronologically reversed for a dramatic effect.

The doors to a Helsinki metro single line are closing at the Hakaniemi station and the wagons start moving towards Ruoholahti. The coming stop is the recently renamed ‘University of Helsinki’. Now present in my environment, after slipping into the Internet to read yet another story about precarity in a ‘neoliberalized’ university, I put my phone in my bag and slowly prepare to get off at the next stop.

“Hey”, exclaims a Finnish woman in her forties. Sitting in a compartment opposite of mine, she attracts the attention of her female companion situated across from her. “You know they’ve changed the Kaisaniemi station to the University of Helsinki, don’t you?”, she asks casually. It was as if someone poked me with a stick. I couldn’t believe my ears. Again this story! Who would have known that riding public transportation would turn out to be so beneficial for my research?

“Really?!”, says the woman’s friend, slightly puzzled. With the renaming having occurred two months ago, I assumed she was not a frequent rider.

“But then you probably haven’t heard of the scandal concerning Tokmanni either?”, the first female continues in a nonchalant manner.

This is getting better and better, I think to myself. How can I move closer to them, but in a way that would not look obvious that I am eavesdropping?
“What scandal?”, utters the companion.

“Well, they renamed it as the University of Helsinki’s Tokmanni”, replies her friend.

The other woman’s face began changing form and colour like she had eaten a really hot chilli and was only able to utter “Seriously?!” before bursting into a vehement laugh. “I’m not kidding!”, says the first one, joining in with an even louder laughter. The train is coming to my stop and I stand up to move closer to the door. It was a pity that I had a meeting in fifteen minutes, otherwise I would have stayed to listen to the rest of the discussion. 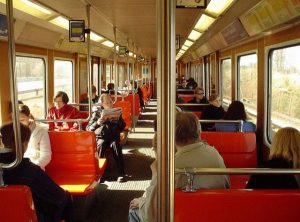 “Well, I guess the name change is helpful for tourists”, says the second woman after calming herself down, occasionally still disturbed by violent after-laughs. “I guess so”, says the first one even more calmly, almost as to proclaim that the joke has come to an end.

“Helsingin yliopisto, Helsingfors universitet, University of Helsinki”, echoes throughout the wagon as it enters the metro station. The orange train slowly stops and I exit.

Tram number 9 heading from the West Harbor to Pasila is stopped at Kaisaniemi to pick up passengers. I enter with my husband to ride two stops to Hakaniemi square in order to catch a 12 o’clock IKEA bus. It is a cold and rainy, early March morning and since there’s not much else to do in weather like this, we have decided to go to buy some extra carpet for our draughty student apartment.

As soon as the doors of the tram closed, a 50-ish year-old woman strikes up a conversation with her somewhat senior female friend. Sitting on the left side of the tram she points towards the Tokmanni store and says “Look at it now”.

“Here it is…here is THE store”, she continues excitedly in Finnish.

Catching my attention, I hear the other woman ask a bit baffled, “What store?”

“The University of Helsinki’s Tokmanni”, answers the first one with a grin.

My husband begins to tell me something, but I signal to him to wait. He is a bit confused, so I tell him in Serbian: “I will explain everything to you as soon as we get off”.

“Don’t you know what happened?”, continues the first woman following a dramatic pause. “They’ve changed the name after renaming the metro station without asking permission and now the University wants to sue them”, says the woman almost ecstatic at this point.
However, the other woman seems to be unaffected by all the excitement of her friend. With a completely flat voice she utters: “But, that’s something you’re not allowed to do, aren’t you?”.
“No”, answers the first woman somewhat sharply, “you are not allowed to do that”.

She abruptly turns her head towards the window, cutting all communication channels with her companion. She seemed to be hurt by her friend’s sober comments, preventing her from turning this whole thing into a mockery. 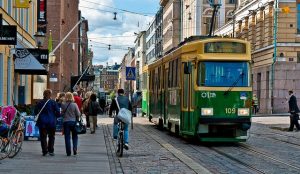 As we exit the tram, the women continue to sit in silence. On the sidewalks, I enthusiastically start explaining to my husband why I had previously shushed him.

Running to the metro station in order to catch the 8.50 train, I feel already late in starting my day with lots to do before 10am. Entering the metro panting, I sit in my favorite spot – the front seat in the first wagon, just behind the driver. As soon as I take my winter coat off to cool down, like any other day I grab a copy of the free “Metro” newspapers, left below the window by a previous passenger. I unfold them and recognize a photo of a budget store in the University of Helsinki’s metro station on the front page. The image is featured with a yellow title:

This was followed by tiny white letters: 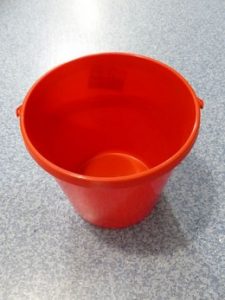 Intreagued, I flip to the rest of the story on page four. Under a title “University Gets Annoyed by a Cheap Store”, there is a half-page account of the name dispute. With different views from the University’s Communications Director, the Executive Director of the Tokmanni concern, and the Name Planner at the City of Helsinki, there was also bizarrly information for the opening ceremony of the store at 9 o’clock that day. To the first 1000 customers there would be a plastic bucket.

It was already 9:05. I think to myself, I don’t have time for this, I need to start replying to all those e-mails that have been piling up. However, when I disembark from the metro and I bump into a person carrying a white bucket with the red “Tokmanni” label, my curiosity overruns my sense of responsibility and I instead head towards the store. While I didn’t know the bucket I acquired during this detour would become one of the central artefacts of my research, I did immediately appreciate the toothpaste that was placed in it, since we had just ran out that morning.

In its 375 years of existence, the University of Helsinki travelled not only through time, but also through space, as it was moved from Turku to the new capital and was spread from its initial location in the Senate Square to other parts of a growing Helsinki. Parallel to all these movements, the relationship between the university and its environment has also changed, which my study, through events like this name dispute, tries to explore.

For an anthropology doctoral candidate, conducting research is also a social journey, since it constitutes a rite of passage for becoming a full member of both academic and anthropological ‘communities’. The former entails graduating from a university PhD programme, the latter completing long-term ethnographic fieldwork. However, nowadays since these two seem to be predominantly associated with different modes of knowledge production – one demanding a strictly defined research framework, the other an utterly flexible one – anthropologists might not often be the most exemplary of doctoral students within an ‘efficiency-obsessed’ university environment.

Yet ethnographers’ continuing presence in the academic setting inevitably reminds researchers of other epistemological possibilities beside the currently hegemonic ones, where something as extraneous and banal as an ordinary metro or tram ride could yield enormously important insights into one’s research subject.