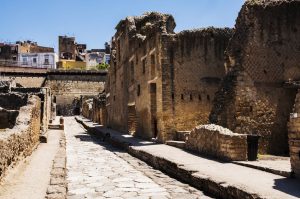 European scientists had pioneered a technique for reading papyrus scrolls from Herculaneum without unrolling them. 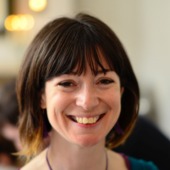 The [2014] announcement that European scientists had pioneered a technique for reading papyrus scrolls from Herculaneum without unrolling them attracted widespread attention.

At first glance, this might seem odd. Of all the artefacts to have been unearthed from the ancient cities of Pompeii and Herculaneum – from the priceless silver to the titillating frescoes, the monumental sculpture to the mundane kitchen utensils – the papyrus scrolls excavated from a grand villa on the edge of Herculaneum seem to be among the least glamorous. Solidified in the volcanic matter that drowned the villa, they resemble nothing so much as lumps of charcoal. Indeed, early excavators in the 1750s, assuming that was all they were, discarded a good many.

Yet this unremarkable appearance belies their true nature. These scrolls were, in fact, the holdings of the villa’s extensive library, the only library to have survived from antiquity. Their promise of untold literary riches has captivated the world ever since, so no wonder that these new developments have received such plaudits.

Scholars and scientists have been battling to satisfactorily decipher the scrolls’ contents ever since an Italian priest named Piaggio devised a machine, in the 1750s, that could painstakingly unroll the papyrus. The first scroll took four years to unroll, and even then, the black ink on the blackened background was exceptionally difficult to read. More recent technological developments in infrared and multi-spectral imaging have allowed the text on unrolled scrolls to be much more easily deciphered.

But the contents of the many other scrolls (too fragile for modern scholars to risk unrolling them) have remained hidden – until the “x-ray phase-contrast tomography” of the new technique, which enables us, finally, to discern the letters written by an ancient hand.

This is undeniably a big step forward. But it is wise to temper our excitement – the “secrets of the scrolls” are still a long way from being fully unlocked. The new technique has, so far, allowed a series of individual letters to be read, and a couple of words to be cautiously decoded, but no more. 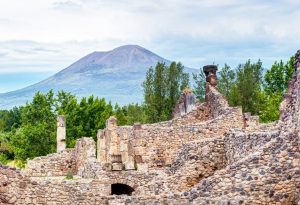 So an equally interesting aspect of this new development is the view it allows us of how we in the modern world think about antiquity.

The Herculaneum scrolls exert a powerful pull on the modern imagination because of their possible contents. So much ancient literature has been lost – with only 10% surviving into the modern world, on some reckonings – that it is hard to suppress our fervent hopes that a great lost work might be discovered in the Villa of the Papyri’s library. Most classicists would give their eye teeth to lay their hands on a copy of Ovid’s version of the Medea, for a start.

Popular representations of the Vesuvian cities have sometimes played with this idea to good ironic effect. Robert Harris’s bestselling novel, Pompeii (2003), has the owner of the villa pleading with her rescuers to save the library, too:

This is where we keep the volumes which my ancestors brought back from Greece. One hundred and twenty plays by Sophocles alone. All the works of Aristotle, some in his own hand. They are irreplaceable …

Our imaginations run away with us even though, in fact, we do know the subject of a good many of the scrolls. Even the earliest decoders recognised that most of them were philosophical texts written by a 1st century BC Epicurean philosopher, Philodemus. In the latest announcement, it was declared that these unrolled scrolls were likely the works of Philodemus too, based on a tentative analysis of the handwriting. This prompts more than a little disappointment, though modern commentators are usually more measured than 18th and 19th century onlookers.

Both the poet Wordsworth and the pioneering art historian Winckelmann were quite open about their regret that these were the texts that had survived, and not the great canonical works of antiquity.

Today, though, the reality of the Villa’s library – at least based on our current state of knowledge – forces us to confront our relationship to antiquity, and what we hope to get from it. Is there an arrogance to our choosiness over which texts survive (“we’d like more ancient texts, but not from this stuffy philosopher, thank you”), or is it an honest reflection of the fact that some kinds of ancient texts are more intelligible, and so perhaps more meaningful, to modern audiences?

Nor are these idle questions. They underpin the debates over whether archaeological activity on the Bay of Naples should focus on what has already been found, or keep unearthing new finds. Arguments for more excavations in the Villa of the Papyri perennially recur, driven in no small way by this desire to look for more texts.

Of course, the Villa is not the only place to conduct this treasure hunt. Other texts turn up, and the recent discovery of new work by the poet Sappho occasioned a good deal more excitement than discoveries of more Philodemus might. Despite any lingering disappointment felt as the Vesuvian scrolls slowly give up their secrets, their hold on the popular imagination, and the seductive allure of Pompeii and Herculaneum more generally, is unlikely to weaken any time soon.