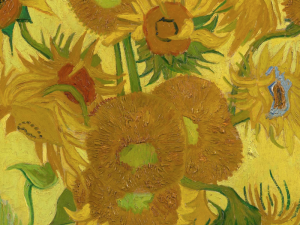 Some of Van Gogh’s most iconic floral artworks, painted in 1888 and 1889, are facing the test of time. (Van Gogh Museum)

A new analysis shows that half of the canvas held in Amsterdam is painted with pigments that darken with exposure to UV light.

Vincent Van Gogh painted his iconic Sunflowers in vibrant yellows and golds, bursting with a sense of life and movement that has made them universally beloved. But the artist could hardly have predicted that more than a century later, those bright lemon-yellow hues would start to wilt into a brown muddle, reports Daniel Boffrey at The Guardian.

A new X-ray study confirms what researchers and art lovers have long suspected: Van Gogh’s paints are fading over time. In 2011, Sarah Zielinski at Smithsonian.com reported that chemists were looking into how the 100-year-old paint was holding up. They found that exposure to UV light—both from sunlight and the halogen lamps used to illuminate paintings in some museum galleries—led to oxidation of some paint pigments, causing them to change color.

A 2016 study looked deeper into the matter to find that one of the bright yellow paints Van Gogh liked, a mix between yellow lead chromate and white lead sulfate, was particularly unstable. Under UV light, the unstable chromate changed states and the sulfates began to clump together, dulling the color. Unfortunately, the process is not currently preventable.

In the latest study, reports Boffrey, scientists created a detailed X-ray “chemical map” of one of the sunflower paintings held in Amsterdam’s Van Gogh Museum, mapping the areas where Van Gogh used the UV-sensitive pigments and areas where he used less sensitive paint. “We were able to see where Van Gogh used the more light-sensitive chrome yellow, the areas that the restorers should look out for over time for discoloration,” said Frederik Vanmeert, a materials science expert at the University of Antwerp who is part of the team tasked by the museum with analyzing the paintings. “We were also able to see that he used emerald green and a red lead paint in very small areas of the painting which will become more white, more light, over time.”

Damien Sharkov at Newsweek reports that, in total, Van Gogh used the photo-sensitive pigments in about half the painting. Currently, the darkening of the paint and the wilting of the sunflowers is not visible to the naked eye. But researchers are not sure how long they will stay vibrant. The museum has already taken some steps to protect the artwork, like installing smart LEDs last year which allow them to control the light spectrum hitting the paintings and more finely control the brightness and hours of light paintings receive.

Despite the effort, there is currently no known way to keep the chrome paints from changing color. And it’s not just the sunflowers at risk—Van Gogh used the light-sensitive paint in many of his other works. The hope is the new research may suggest ways to stop the wilting or new techniques for lighting or displaying the paintings that will help them last longer.

“Discoloration of pigments is a topic of research that is of great interest to us since Van Gogh, as did his contemporaries, used several pigments that discolor over time,” Marije Vellekoop, head of collections and research at the Van Gogh Museum, tells Sharkov. “At the moment, we are processing all the research results of this iconic painting, after which we determine how we will pay further attention to discoloration in our museum. We know that the discolored pigment chrome yellow has been used a lot by Van Gogh, we assume that this has also been discolored in other paintings.”

Even if researchers can’t stop the sunflowers from drooping in the future, there are efforts to make sure they’re still available in their original vibrant colors for later generations. Last year, museums holding five of the original seven paintings (one was destroyed in Japan during World War II and the other is held by a private collector who doesn’t like to share) put them all together in a virtual gallery, which won’t fade, even if it is a bit glitchy from time to time.